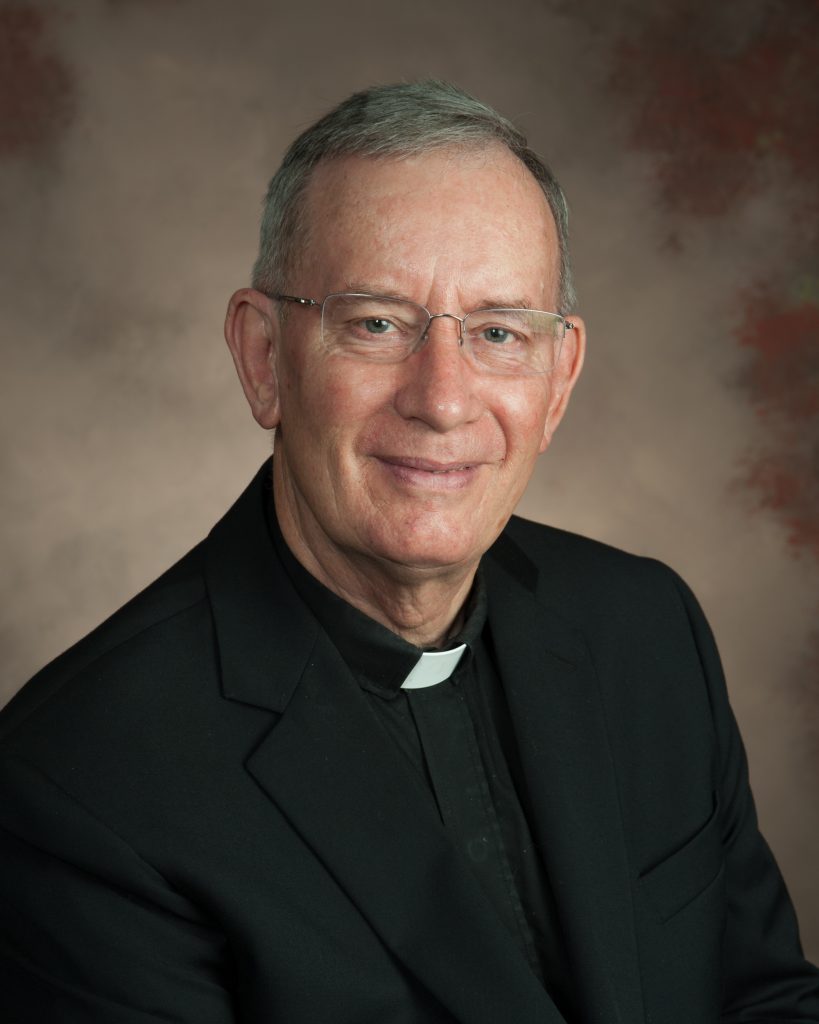 Father Stephen Colchin believes that the longer a priest serves at a parish, the more he is able to deepen his relationship with his parishioners and their families and truly accompany them through the ups and downs.

Father Colchin was born and raised in Decatur and went through 12 years of Catholic school before attending college and enlisting in the United States Air Force. After that, he completed courses to become a civil engineer.

While working with the Army Corps of Engineers in Louisville for 4-1/2 years, he passed by St. Meinrad in southern Indiana. “I decided maybe I should attend there,” he said. “After a year, I realized I was called to the priesthood.”

During his first year studying theology Father Colchin was unaffiliated, which meant he was not representing a religious order or diocese. He paid his own way.

“My dream was to move back to Adams County, where I was born and raised, and become the county engineer or surveyor,” he explained. “As I considered that dream, I also learned that if I continued in my studies, I could join any diocese I wanted to in the United States.” He settled on the Diocese of Fort Wayne-South Bend, because he felt he could be more effective by “speaking the language” of this region.

“St. Charles was an excellent parish for my first assignment,” Father Colchin recalled. “Father Hession instructed me very well. Father Suelzer was also a great influence and was very open in answering my questions.” From there he was transferred to St. Thomas the Apostle Parish in Elkhart, where Father Derek Snead introduced him to what would become his most faithful companion as a priest – dogs.

He acquired his first dog, Zach, while he was assigned his first pastoral position at St. Joseph Parish in Bluffton. Zach accompanied Father Colchin for 11 years while he served the people in Bluffton and at St. Louis, Besancon Parish, New Haven.

“I enjoyed my time in these rural parishes,” he reflected, “because I could take long walks with my dog and think things through. The friendly faces and slower pace were refreshing to me.” During the challenges of his priesthood, Father Colchin added that his pets have helped him survive loneliness and provided a sense of companionship.

Something that touched Father Colchin during his 37 years as a diocesan priest was when the parish council at St. Louis, Besancon wrote letters to every parishioner, inviting them to donate toward the purchase of a bell that would ring the Angelus three times a day. It made a great impact on him because he had served there for 11 years. “Because I was there so long, the kids who graduated from that parish I had also baptized as infants.”

“Every parish has been very welcoming to me,” he said. “The rural areas are more neighborly – they want to walk with you, get to know you on a personal level. Both Besancon and St. Rose of Lima Parish in Monroeville had schools. They competed all the time, so there was tension for me, as pastor of both places.”

Father Colchin will retire from St. Mary Parish in Huntington.

“Every parish has been so welcoming to me,” he said. “The people at St. Mary’s have been gracious and kind. I learned that, wherever the Lord sends you, you use your past experience to serve.” Because of his civil engineering background, Father Colchin has been able to facilitate the repairs and renovations of some of the parishes and schools where he has been assigned, including St. Mary.

He reflected that every parish offers some challenges, but many more blessings.

“I always take the attitude that if you can leave the place better than how you found it, you’ve accomplished a lot. At the parish level, you can truly make a difference in people’s lives.”

Father Colchin is looking forward to retiring from active ministry with a mixture of nostalgia and hope. About 23 years ago, he built a house for his mom to reside in. “The intention was for me to move in with her once I retired,” he shared. “I will be able to help her and be close to the parish where I was raised. I know I can help out there when needed.”

He believes the most important thing as a priest to remember is this: “Wherever you go there are good people, in every parish. If you express a need, they will typically walk with you and help you through it.”

He shared that the gift of loving parents who cared for him and his siblings has been the greatest blessing of his life. He said he feels that what people learn in their families of origin during their formative years is powerful and important.

“When I look back, I realize what an impact and influence my parents have been on my life and priesthood,” he recalled. The formation of faith within the family unit and the Christ-like example demonstrated by parents will help Catholic children of future generations discern religious vocations and continue to bring Jesus to those in most need.