VATICAN CITY (CNS) — Sharing and celebrating the joy of faith with thousands of Catholic teenagers from around the globe was a rare moment that not many people are able to experience, a U.S. teen said.

“It was a different atmosphere than what I’m used to, but it’s good because it shows that the beauty of the Catholic Church is there,” Emily Sullivan told Catholic News Service April 25.

Emily, her brother Ryan and parents Matt and Susan, came from North Carolina to participate in the Year of Mercy celebration for young teens April 23-24 in Rome.

Both siblings, who are preparing to receive the sacrament of confirmation, said that despite the language barrier, they were able to join in singing and praying during the April 23 youth rally at Rome’s Olympic Stadium.

“It was awesome; the energy was insane,” Emily said. “The people knew all the lyrics and they were jamming out. So we came up with a couple of words that we could sing along. It was really cool to be in that atmosphere.”

To see so many Catholic teens in one place was “definitely encouraging,” she added.

For Ryan, attending the April 24 Mass in St. Peter’s Square was the highlight of his pilgrimage. “It was great seeing the pope,” and “meeting other people and seeing the city” was “all good,” he told CNS.

“We will make our confirmation in two weeks so it was definitely great to see the history of the church and (meet) other people who are Catholic because where we live, there’s not as big of a following,” Emily said.

In his homily, Pope Francis told the more than 100,000 teens present that happiness “is not an ‘app’ that you can download on your phones” and that love leads to true freedom, which is a gift that comes from “being able to choose good.”

The pope’s message, Emily said, encouraged people “to go back to the church at the end of the day, not your phone.”

Their mother Susan told CNS she hopes that attending the jubilee event will give her children a “fuller and richer experience” as they prepare to receive confirmation in two weeks.

“It was really important for me and for them to have this experience,” she said. “To be that close (to Pope Francis) as he was celebrating Mass was truly, I hope, a life-changing experience for them that reaffirms their faith.” 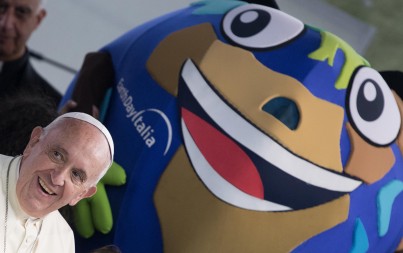 VATICAN CITY — Dive into the world’s problems with courage and help people turn their lives of desolation into abundance and hope, Pope Francis said.

“You must take life as it comes. It’s like being the goalie in soccer — grab the ball wherever they kick it,” he told people gathered in a Rome park for an Earth Day event.

“We must not be afraid of life, afraid of conflict,” he said April 24, because it is only by confronting challenges head-on and together that they can be solved.

In conjunction with the celebration of Earth Day April 22, the Focolare Movement tried to create a “village” in the park in the center of Rome to promote ways for people to live together in friendship and solidarity and with respect for the environment.

After listening to some of the speakers talk about their experiences helping others, Pope Francis said their work was a “miracle” in which they helped transform “deserts into forests.”

The arid, lifeless world of the desert can be found “in all of our hearts,” in cities, on the margins of society and even in exclusive, gated communities — “it’s terrible, the desert is there, too,” he said.

“But we must not be afraid to go into the desert in order to transform it into a forest,” bringing about abundant life, even if it is a bit “messy.”

The only way to understand the world’s problems — and feel compassion — is to get close to those in need, the pope said.

“It’s a risk, but it is also an opportunity, for me and for the person I draw near to.”

Helping others must be “free” without expecting anything in return, he said. The Christian sense of “gratuity” is not to be forgotten “in this world where it seems if you don’t pay, you can’t live.”

Some people will look withdrawn or worried, he said. They are missing “a smile, tenderness” because they lack a kind of friendship or fellowship among people in the community.