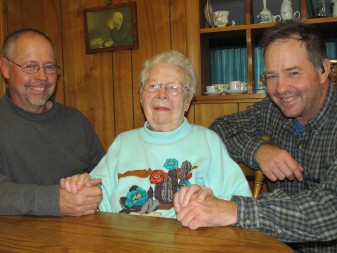 Matthew and Frank Driscoll sit with their 92-year-old mother, Anne, who remembers the Dust Bowl and farming the land with her late husband Eugene in rural Urbana. The Driscolls attend St. Robert Bellarmine Church in North Manchester.

URBANA  — It takes more than knowledge of seeds, chemicals and equipment to be a grain farmer today; it takes a lot of faith.

Frank and Matthew Driscoll and their families have had a deep, abiding faith for generations and attend St. Robert Bellarmine Church in North Manchester. The fifth-generation farmers grow about 450 acres each of corn and soybeans, 100 acres of wheat and raise about 1,200 hogs from farrow to finish annually.

“If you didn’t have faith, you wouldn’t be doing it,” said Frank. “You plant the seed and hope it grows; you have to have faith. … It’s a blessing we can have the lifestyle we have.”

The original land where they farm was homesteaded in 1834 during Andrew Jackson’s presidency, Frank said. It’s always been in the Driscoll family name, but Frank and Matthew’s cousins owned it until 1986.

The farm, cultivated by the Irish-Catholic family, grew over the years and now supports three families. In 1955, a national plowing contest was held at the farm where Vice President Richard Nixon attended, Frank said.

Frank and Matthew’s mother, Anne, helped create their faith foundation with a good example. She grew up on a farm in Duncan, Neb., as one of 10 Catholic children.

“First of all, we did rely on our faith,” the 92-year-old matriarch said. “We said our prayers every day and often recited the rosary together. We prayed, especially because of the storms. We always prayed very faithfully, as we were in the path of storms.”

With the Rocky Mountains to the west, “the storm were pretty violent at times,” she explained. “We wouldn’t have been surprised to be in the path of a tornado. We spent time going into our basement during storms.”

Anne vividly remembers shocking grain, riding cows because “they were tame” and gardening vegetables with her siblings — which included three sets of fraternal twins. She also remembers attending Catholic grade school and the Dust Bowl.

“(The grasshoppers) were determined to have something to eat,” she recalled. “They bored holes in a fence post and they ate the paint off the barn. But Oklahoma had more trouble with the dust (than we did in Nebraska).”

Anne later studied nursing in Lincoln, Neb. and was a stateside Army nurse during World War II. She worked with men who had been paralyzed in action.

“You couldn’t have nicer young men to work with,” she said.

While working at a San Jose hospital in California, Anne worked with the sister of the man she would celebrate 50 years of marriage with in 1999. Anne and Eugene Driscoll were wed in 1949 and came to Indiana in 1951 to farm here. Eugene died in 2006, but they had many good years of faith and farming together.

The Driscolls continue to pass their faith on to the younger generation through prayer. Recently, Matthew, who takes an interest in breeding show pigs, took his son Ryan and Frank’s son Daniel to show their hogs in Louisville, Ky.

“They prayed the joyful mysteries on the way to the hog show,” Beth had heard.

The Driscolls are thankful to be raising their children on a farm.

“They get to see the real world from beginning to end, from seed to crop,” Matthew said. “Living in town, they wouldn’t have that kind of opportunity.”

“They get to see the complete life cycle,” Frank added.

Farming is a hard life, especially during planting and harvest. “There’s times you’ll go without sleep for a day or two,” Matthew said. The two brothers shift between caring for their crops and the hogs, Frank explained.

But the Driscolls are thankful that farming allows for flexible family time. “We’re tired, but Frank and I try to make an effort to attend our kids’ activities,” Matthew said. “We have the opportunity to take care of Mom. I’m thankful for that. We’re there for our family in important times.”

Frank and Matthew’s two older sisters come home from Idaho and Kentucky to care for their mother a few times a year as well.

“(Anne’s children) make sure she has breakfast, lunch and dinner,” Beth said. “One of the boys makes sure she has help getting ready for bed. Her faith and genteelness have been a good example for me, and the family; her faith is what has kept her family together. It holds our family together as well.”

Even though they and an increasing number of farmers buy crop insurance, the Driscolls continue to pray for a good harvest.

“… During planting, we always ask (God) for a safe planting, the guidance to make the right decisions with seed selection and purchasing new equipment …” Beth said.

Beth and Matthew’s wife, Angela, have worked outside the home, which helps support the families during difficult times. The drought has not helped any farmers, but it wasn’t as bad as initially predicted.

“This year’s crops are at least one-quarter better than they were in 1988,” Frank said.

“In a drought year, we usually have more insects and microbial life feeding on the plants,” Frank continued. “That’s the difference; my set cost per bushel varies depending on how much I produce. Land cost is the same whether I produce a lot or a little. Conditions are really variable and prices are subject to the board of trade.”

Still, Frank and Matthew Driscoll have enjoyed farming for its freedom and opportunities. “I like driving the equipment (combines and tractors),” Frank said. “… (Farming) teaches you patience. You plant the seed and you have to wait; nothing is instantaneous.”

Matthew appreciates breeding show pigs and “being around animals when they’re born — the newness of life. What’s their future? What will they turn into?”

But the Driscolls never forget their role as farmers. “God’s there (in the seeds) and tells them when to start,” Matthew said. “We just facilitate the process.”

In between farming, Frank and Beth are raising three children: Sarah, 15, Anna, 13, and Daniel, 11. Beth also teaches religious education at church and Frank has served with the Urbana Volunteer Fire Department for 15 years.

Matthew and Angela have four children, as well: Bridget, 23, Kaitlyn, 21, Shannah, 18, and Ryan, 13. Matthew has served on the Metropolitan School District of Wabash County school board for 14 years.