In life, there is a habit of storms occurring in the paths of ordinary people.

There is little argument that the last year brought fierce storms to many. The measure of a person’s faith is how they choose to handle being tossed about during unforeseen situations.

When they lost their husband and father, Lillian and Autumn Leap faced a challenging time with incredible faith in God’s providence and will.

In the weeks prior to Christmas, John Leap came down with symptoms of COVID-19 and was admitted into the hospital. On Christmas Eve, he was placed on a ventilator and by Jan. 16 had succumbed to the virus.

During the long weeks while he fought the illness, his wife, Lillian, stated how she and their daughter would talk to him daily, hoping he could hear them even though he never regained consciousness.

“I can’t put it into words exactly what he represented to us and how much we miss him. We miss him a great deal and it’s just a massive void,” Lillian said.

And yet, one does not get a sense of sadness or loss in Lillian’s presence, but a completely different feeling – a feeling of peace and even joy. Lillian explained.

“I think we couldn’t have done it without God’s help and without God’s strength. Every day we were praying and every day, in the middle of not knowing what was happening, He brought us peace.”

“I believe that we put our trust in Him and we knew that at the end of the day, He would make the decision. If it was for God to take him, obviously we have no say in the matter and we understood that that was His decision and we would be OK with that,” Lillian stated. 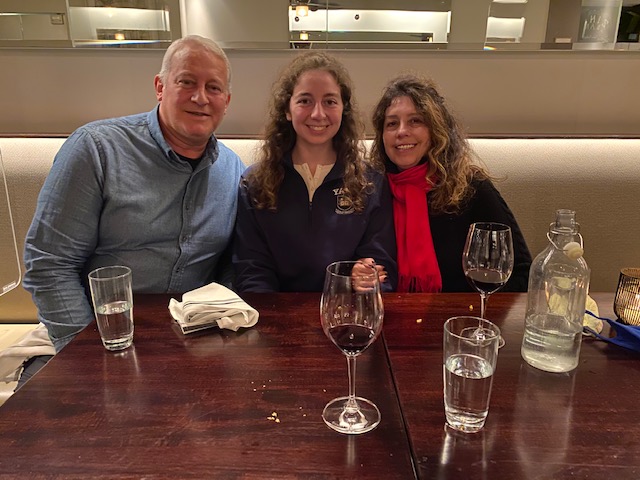 Provided by Lillian Leap
Mother and daughter Lillian and Autumn Leap have been each other’s strength through the loss of their husband and father, John, in January. During the same time period Lillian was recognized as a superior performer in her job as an interpreter for Saint Joseph Health System in Mishawaka.

On the day John died, Autumn felt God working in her heart. She shared, “We had gone to Mass and I remember just being so filled with thoughts like ‘this could happen’ or ‘that could happen.’ And it was almost jarring for me at the Mass because everything felt like it was happening in slow motion. But right in the middle of the homily, the Holy Spirit was so powerful. It turned all of that restless energy into a determination, like a readiness that no matter what happens – and something very real could happen today – I was so ready for it because the Spirit was right there and moving.”

Immediately after Mass they received a call from the hospital to come and visit John, and later that day learned that he was gone.

Lillian remembers John as a kind man, a good provider and someone who loved to share new experiences with her and their daughter. The two met in Indianapolis and celebrated 20 years of marriage last year. The three used to volunteer at Our Lady of the Road, serving breakfast to the homeless.

The Leap family has also been involved at their parish, Queen of Peace in Mishawaka, for over a decade since they moved to the area from California. Autumn attended grade school and received her sacraments there. The parish family has provided a tremendous support for the Leaps throughout this tragedy, particularly Father John Eze, pastor of Queen of Peace.

“It’s a very special church for us,” Lillian said. “The community has been praying for us. Even if we don’t know who they are sometimes, we get little notes or Mass intentions. They have been so superb.” 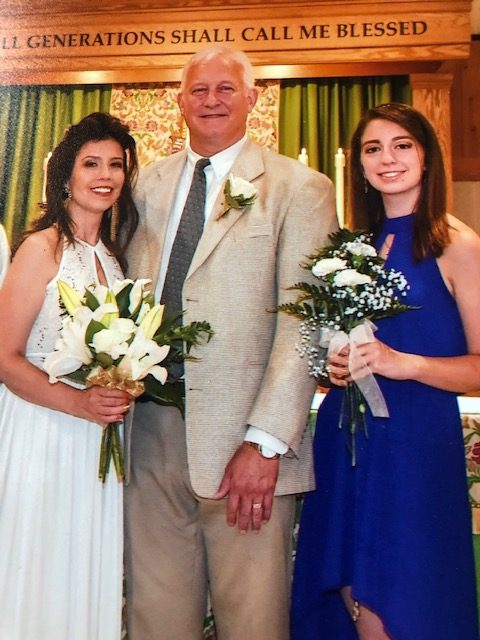 Lillian and John Leap renew their wedding vows at Queen of Peace Parish in Mishawaka in 2018.

The parish has not been the only source of comfort for Lillian and Autumn. Lillian is a Third-Order Franciscan, an organization of lay people who dedicate themselves to following the teachings of St. Francis of Assisi. She explained that her group meets once a month to continue growing in faith together. Participation in the Franciscan order has greatly strengthened her faith life and blessed her during this time, she said.

Oftentimes, even when the rain falls, God seems to send a rainbow. For Autumn, this came in the form of the same pandemic that took her father’s life. She should have spent her first year of college away from home, studying at Yale University in Connecticut, which did begin in-person. Since Thanksgiving break, however, she has been studying online at home, which is certainly not her preference. But the misfortune turned into a blessing, as she was able to be physically present with her mother throughout the last weeks of John’s life. It also gave her the opportunity to fully process the changes and prepare for the eventual outcome.

“I was really glad to have been here while everything was happening because it would have been a totally different game if I’d been away at college and just receiving phone calls.”

Lillian concurred, leaning on her daughter for encouragement. “I’m so touched by her faith as well. She’s been a good supporter and I know she doesn’t like it — I don’t think any student likes to study virtually … but I’m glad she is here at this difficult time with me.”

In her work as a medical interpreter for Saint Joseph Health System in Mishawaka, Lillian was recently recognized as an outstanding employee by David Hofstra, administrative director of imaging and therapy services. Even though her husband had passed away barely more than a week prior, Lillian was able to set aside her grief to aid a Spanish-speaking family with a complicated medical question via telephone. Hofstra was impressed by Lillian’s ability to help with “competence, incredible patience, and with tenderness in her voice.”

For Lillian, it was not a matter of hiding her grief, but putting herself second to perform a job that she loves. “I always ask the Lord every day to make sure that my journey with Him and my work is always what He would like me to do so He can always be proud of me in my job. So when I do my job, I do it with love and with respect.”

Lillian recognizes the hand of God working in her life in other amazing ways. The recognition she has received in the past couple of months has touched her deeply, bolstering her faith and her spirit.

“It was like something lifted. I’m not sure what it is, but something beautiful lifted inside me then. It made me realize that life is still beautiful, and that people and the community care.  That love you don’t see is truly there, and it feels beautiful.”