They differ in years, backgrounds and career paths. But Jaylon Smith and John Tippmann Sr., inspired by their Christian faith, share a passion for giving back and helping others. 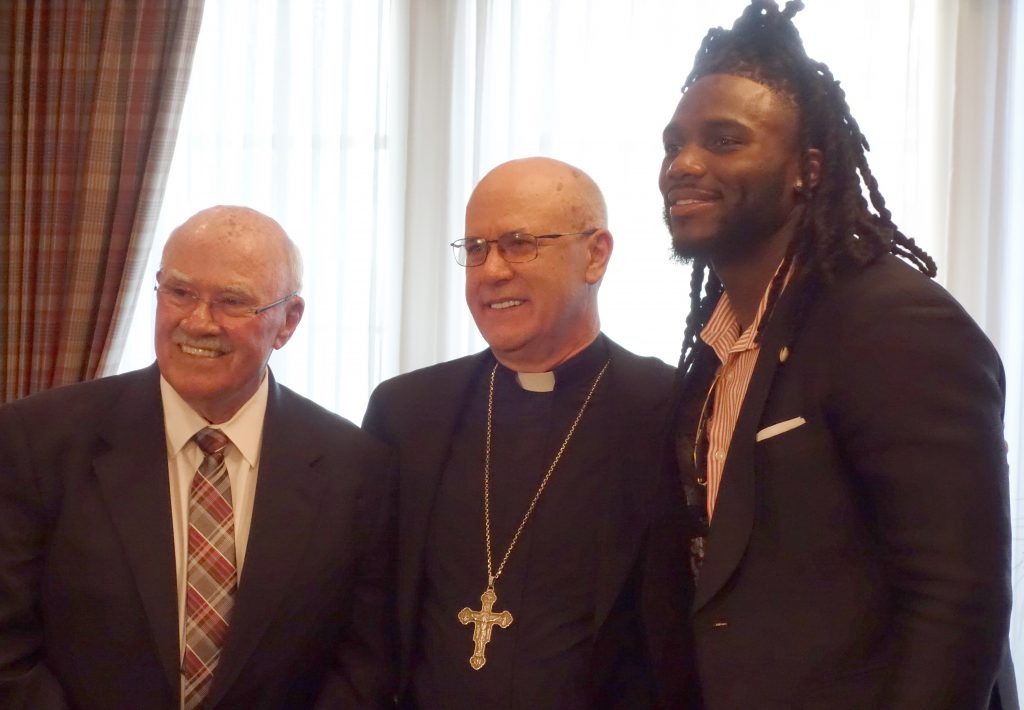 John Tippmann Sr., left, and Jaylon Smith, right, stand with Bishop Kevin C. Rhoades before the Mad Anthonys Children’s Foundation’s annual Red Coat Dinner on June 14 in Fort Wayne. Tippmann, a Fort Wayne businessman and philanthropist, and Smith, a linebacker with the Dallas Cowboys and former football star at Bishop Luers High School in Fort Wayne and the University of Notre Dame, each was presented with a red sport coat to honor them for their community service. Bishop Rhoades led the prayer before dinner. — Photos by Kevin Kilbane

Smith and Tippmann were presented with their red coats at an elegant dinner at Fort Wayne Country Club, ushering them into an elite group of recipients who range from Fort Wayne business leaders and late astronaut Neil Armstrong to Vice President Mike Pence and Notre Dame football head coach Brian Kelly.

Smith and Tippmann also were the guests of honor at the Mad Anthonys’ annual Charity Classic golf tournament held June 15 at Fort Wayne Country Club. The golf tourney and Red Coat Dinner raise money to support operation of the Mad Anthonys Children’s Hope House, which is located on the Lutheran Hospital campus at Jefferson Boulevard and Interstate 69 in southwest Fort Wayne. 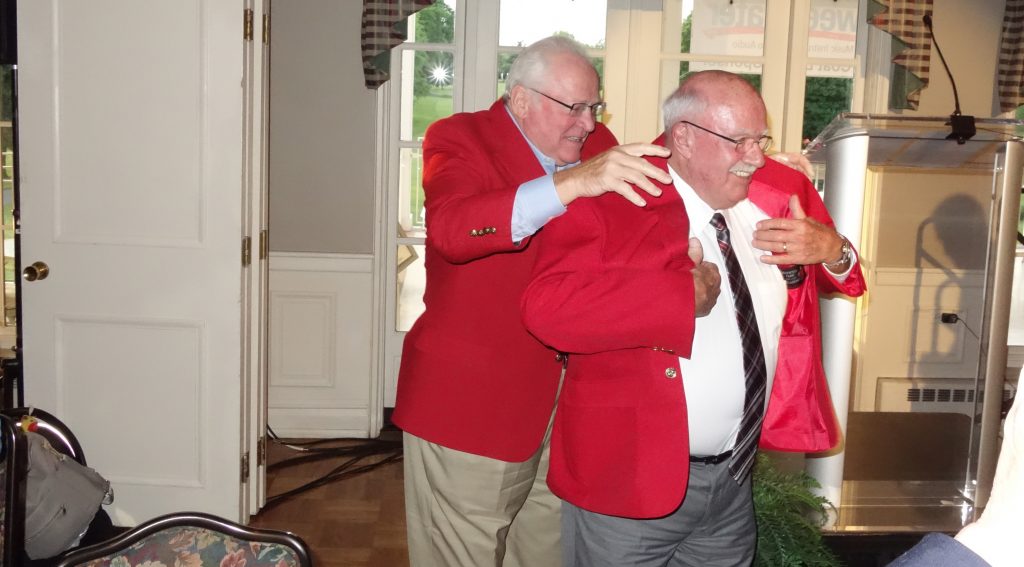 The Hope House provides homelike accommodations for families who have a child receiving treatment in a Fort Wayne hospital. Families are asked to make a donation of $10 per night for their stay, but no one is turned away because of inability to pay.

Speaking to media before Red Coat Dinner, Tippmann and Smith said their faith plays a strong role in their community service.

Tippmann, the seventh of 16 children, described his parents as “strong Catholics.”

“They instilled in us children the values of living your faith and sharing the gifts God gives us,” he said.

The family didn’t have time or resources for him to attend college, but they were active in the refrigeration business, a field he enjoyed. He went on to found Tippmann Construction and then to create Tippmann Group, which includes the construction company; Interstate Warehousing, a national leader in cold storage; and Tippmann Properties, which owns and manages office, commercial and industrial real estate.

Tippmann said he tries to live by the philosophy of sharing with others.

In the Bible’s Gospel of Luke, Chapter 3:11, it says, “If you have two coats and meet a man with no coat, give him one of yours,” Tippmann said.

He used profits from his businesses to create the Mary Cross Tippmann Foundation, which is named for his mother. The foundation provides grants to about 75 ministries and organizations annually.

Tippmann also has been involved in the launch or growth of other Fort Wayne charitable organizations, such as the Matthew 25 Health and Dental Clinic and the Vincent Village program for homeless families, Mad Anthonys board President Mike Wallace said in an introduction before asking Tippmann to step forward to receive his red coat. 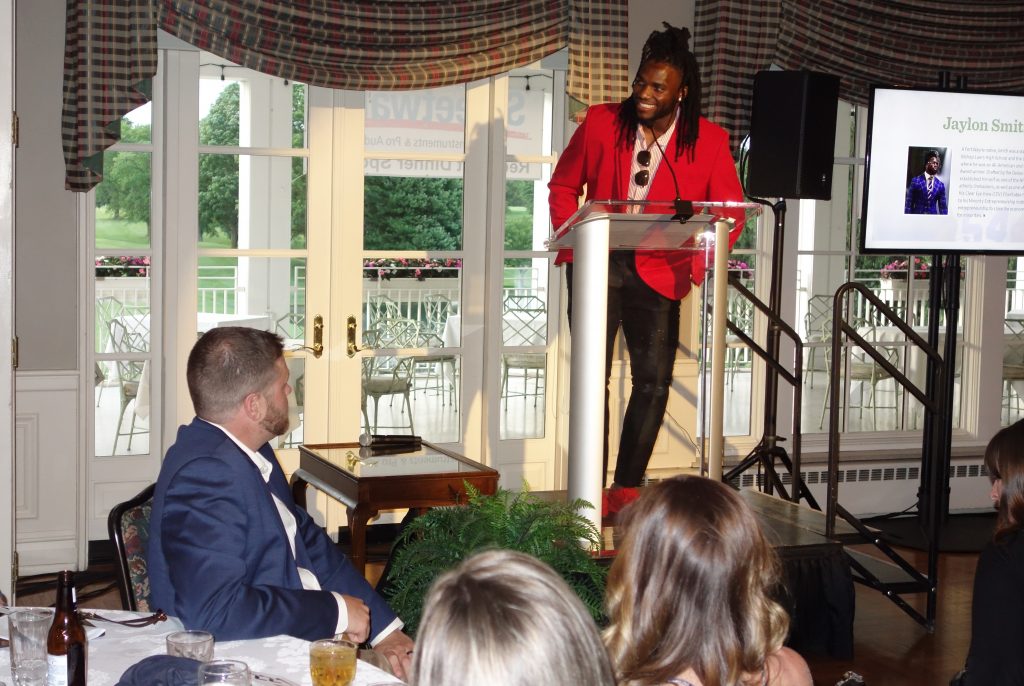 Jaylon Smith, a former Bishop Luers High School and University of Notre Dame football star now playing for the NFL’s Dallas Cowboys, speaks to the crowd after being presented with a red coat during the Mad Anthonys Children’s Foundation’s Red Coat Dinner held June 14 in Fort Wayne. Presentation of the red coat honors a recipient for making a significant difference in the Fort Wayne area.

Smith, who celebrated his 24th birthday June 14, described receiving his red coat as a “blessing” during comments before the dinner. Having been born and raised in Fort Wayne, he understands the significance of the honor, he said.

“We all have a purpose, to Indiana, to this world, and that’s the beautiful thing,” Smith said. “It’s about giving back, loving and serving.”

Christian faith helped shape him and his desire to give back, he said. “I believe in Him (God) and love Him and worship that guy.”

While he describes himself as a lifelong Christian believer, Smith said he didn’t grow up belonging to any religious denomination. He feels blessed to have been raised in a household with both parents and to have been surrounded by faith-based values while attending Bishop Luers and Notre Dame.

One way Smith, a starting linebacker for the Dallas Cowboys, has been giving back is through the Earn Your Stripes football camp he and his brother, Rod, have organized for ages 7-13 in Fort Wayne. Rod played with Jaylon on the Cowboys before signing this off-season with the New York Giants.

Their third annual camp, which is sold out, is scheduled to take place June 28 at University of Saint Francis.

Jaylon, who helped Bishop Luers win four consecutive Class 2A state football championships from 2009-12, also gives back through his passion for entrepreneurship.

He has launched a Clear Eye View eyewear brand and created a Clear Eye View Charitable Foundation, it said on his website, jaylonsmith.com. His Minority Entrepreneurship Institute, which operates in partnership with the Sagamore Institute think tank in Indianapolis and the National Christian Foundation in Alpharetta, Georgia, helps minority entrepreneurs succeed by connecting them with support and investors.