After nearly 10 years of postponements, this spring will mark the fulfillment of Brandon Ballentine’s longing. He will become a member of the Catholic faith when he is welcomed into the Church at the Easter Vigil.

The catalyst for his conversion was meeting his future wife, Anna, in a rather unlikely place — the island nation of Japan.

Brandon was stationed in Japan while serving in the Navy; Anna moved from the Philippines to Japan to live with her family, as her father was employed there. They met by accident at a Germanfest celebration when Brandon literally bumped into Anna.

“I didn’t say ‘excuse me,’ I said, ‘you’re in my way.’ Then I spilled my beer on her,” Brandon recalled with a laugh. Anna “returned the favor” by not helping him find his way back to base when she spotted him on the train later that evening, appearing lost and confused.

After that inauspicious first encounter, the two reconnected through an online dating app that one of Anna’s friends had signed her up for. As a single mom, she had not been interested in dating, but when her friend saw a profile picture of “that American dude” on the app, she messaged him in Anna’s stead. “That’s how it started. Then the talking started,” Anna said.

They seemed to hit it off. Brandon spent much of his Christmas leave back home texting with Anna.

When they met in person, the relationship developed quickly – a little too quickly, actually, for Brandon. A couple of months into it he broke up with Anna, stating that “at 22, I wasn’t ready.”

Less than a week went by before he realized his mistake. It was a Sunday morning when he called to tell her he was waiting at the train station in Joso, the closest station to Anna’s small town. Though he could neither read nor speak Japanese, he figured out how to make the 2-hour trip to apologize to her. 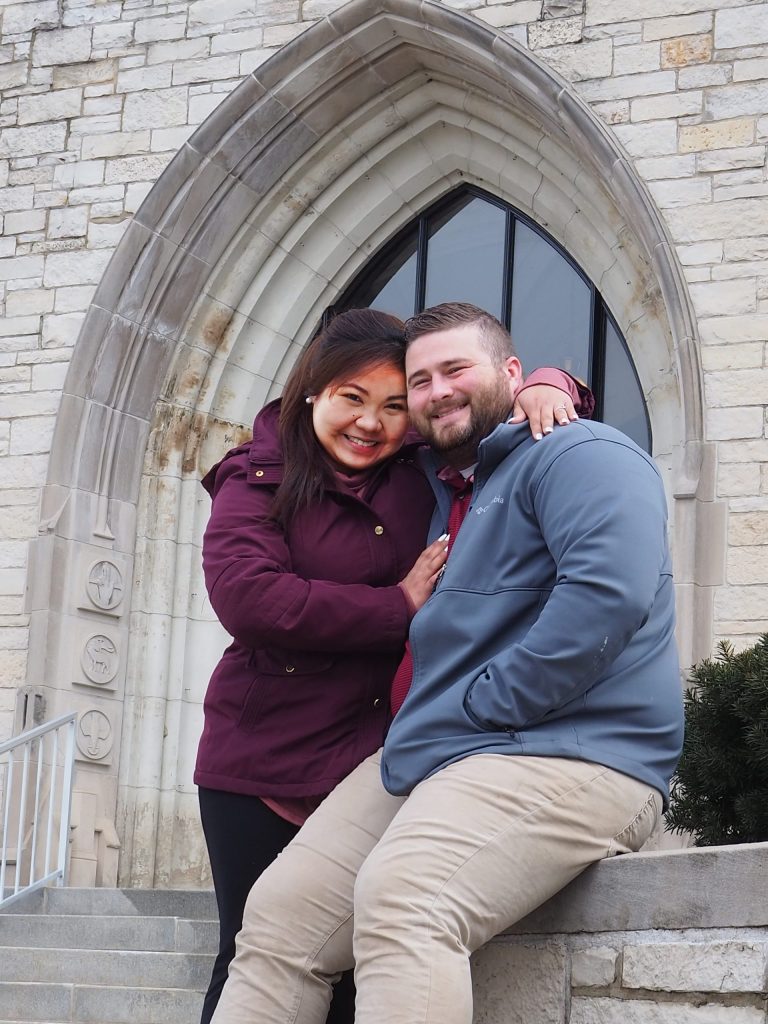 Jennifer Barton
Anna and Brandon Ballentine met while he was stationed in Japan in the Navy. Anna’s strong Catholic faith and the acceptance he found at her church led him into the Catholic faith; he will receive his sacraments of initiation at the Cathedral of the Immaculate Conception this year.

On Sundays, Anna’s devoutly Catholic Filipino family went to Mass, ate lunch and had family time. As the patriarch of the family, her father decided that day that “the American” could wait. “My dad said, ‘if he waits, then maybe you should talk to him; if he doesn’t, let it go,” Anna said.

“I waited eight hours,” Brandon remembered. Finally, Anna’s father agreed to pick Brandon up at the train station. She went with him. Her father allowed Brandon to spend the remainder of the day with her, and even to stay overnight on an uncomfortable foam mat on the floor. The next week, Brandon was allowed to return to the family home and attend Mass with them.

Brandon had been raised in southern Mississippi in a nominally Southern Baptist family, though regular church attendance was not part of his family life. He was never baptized.

“I’ve been to Catholic churches here and there with friends and family and stuff, but I wasn’t really a strong Baptist. I didn’t go to church a lot. So when she said they’re going to a Catholic church in Japan, I said ‘I gotta see this.’ Right away I was amazed; it was a beautiful thing, it really was.”

The church in Joso was small and people were spilling out the doors that morning. Many of those in attendance were Filipino migrant workers, though Brandon did see a great number of Japanese people as well. Of the Catholic faith in Japan, Anna explained that “contrary to popular belief that Japan is all Buddhist, it’s really not. There are a lot of Catholic communities in different cities, even more in the countryside.”

What struck Brandon the most about the Catholic Church was its openness to everyone. “Just the feeling and being there, it felt like I was accepted.” He recalled that in the Baptist churches he had experience with, “if you didn’t grow up there, you were an outsider.”

After that first time, Brandon began to attend Mass with Anna regularly. They have been together for nearly 10 years and were married in Japan eight years ago.

Throughout that time, Brandon has been hoping to one day join the Church. “I’ve been wanting to convert since we were in Japan; we just didn’t have a chance.”

The couple seemed to move constantly until his five-year tour was completed and they were able to return to Indiana. Once back on American soil, however, it took time for the Ballentines to establish themselves enough that Brandon could dedicate himself to the RCIA process. The transition to civilian life and the training that new jobs required stole much of Brandon’s focus.

“I knew going through RCIA was going to take a lot of commitment and consistency,” he stressed. They didn’t have that for the longest time in their married lives, Anna felt. However, “Even though he hasn’t been baptized, he is very committed to learn more about it and to delve more into the faith because he just felt so accepted and loved,” she said.

A job offer brought Brandon from Noblesville, where his parents live, to Fort Wayne, where the family finally settled down. They first began to attend a Catholic church near their house, but when they missed the early Mass one Sunday, they ended up at the Cathedral of the Immaculate Conception for evening Mass.

Not only was the church itself familiar in style for Anna, but the same feeling of acceptance Brandon experienced in Japan struck him again. With no more moving or traveling, he was finally able to start RCIA and developed a bond with Father Jacob Runyon, the cathedral’s rector. This Lent, Brandon’s faith has deepened even more through devotions such as the Stations of the Cross, which he recently attended for the first time.

Anna commented, “He was super-emotional that night. After Father Jake did the Stations, we walked through each and every one of them and he just stopped in awe of everything.”

Though the wait was long and there are still things he doesn’t understand, Brandon feels he is prepared to enter into the Catholic faith. “I’m nervous and excited at the same time,” he admitted.