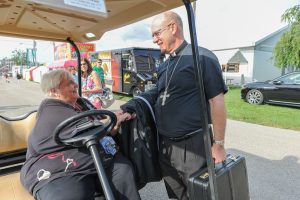 Peggy Miller, a longtime Elkhart County 4-H Fair Board member, greets Bishop Rhoades on July 23, the morning of the annual Catholic Mass on the fairgrounds. —
Photo by Joe Raymond 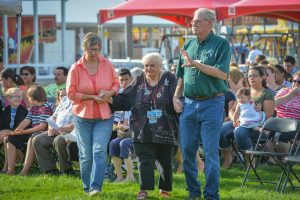 Following the July 23 Elkhart County 4-H Fair Mass, Bert and Elaine Egging assist Peggy Miller on her way to meet the celebrant, Bishop Kevin C. Rhoades. This year marked the 25th annual celebration of the Mass at the fairgrounds during fair week, a tradition that began at Miller’s behest. —
Photo by Joe Raymond

For 25 years, Catholics involved in the Elkhart County 4-H Fair have enjoyed celebrating Mass on the fairgrounds early in the 10-day fair week. This year, coinciding with the anniversary, the celebrant for the liturgy was Bishop Kevin C. Rhoades. As Miller rode up in a golf cart next to chairs set out for the Mass and saw him at the altar, she got teary-eyed. Bishop Rhoades greeted the congregation, acknowledging, “I understand this is the 25th year and the first time a bishop has ever been here.” He spoke about how at this time last year he was at World Youth Day in Poland: The processional song of that fair week morning, “Blessed be the Merciful,” brought back many of those memories, he told those gathered. 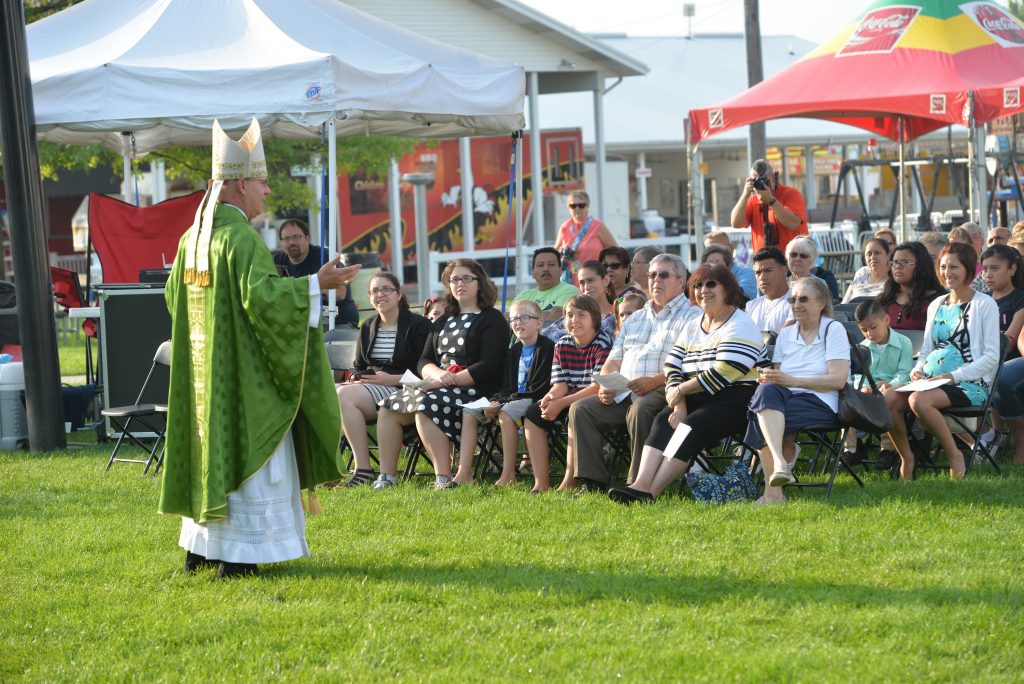 Bishop Kevin C. Rhoades speaks to nearly 400 worshippers during a celebration of Mass at the Elkhart County 4-H Fairgrounds Sunday, July 23, in Goshen. The second-largest county fair in the country has offered a Catholic Mass on the first Sunday of fair week since the early 1990s. — Joe Raymond

“It’s great to be with you and what a great Gospel for an outdoor Mass,” he continued during the homily, referring to one of the day’s readings, which focused on the third parable of the wheat and the weeds.

“We shouldn’t reject sinners; we’re all sinners,” he said. “We should pray for them and help them get on the right path. Our temptation is to judge, but as Pope Francis is teaching us, we need to bring people back.”

Miller, a member of St. John the Evangelist Parish in Goshen, was president of the Elkhart County 4-H Fair Board in 1991-92. There had been a Protestant worship service at the nationally recognized county fair for many years, and fair board presidents were encouraged to attend. She did, but got to thinking: “There were a lot of Catholic kids in the barns; the sound people were Catholic; so maybe we could have a Catholic Mass here as well.”

She talked to her parish priest, asked around about who might be interested in attending at the available 8 a.m. time slot — and got it in motion. She said she knew if there was going to be a Mass at the fairgrounds they’d want more than those who sleep overnight on the fairgrounds to attend. Everyone she spoke with was encouraging that yes, others would come. The following summer, in 1992, Mass was celebrated during the fair for the first time.

Back then, she didn’t think of it as evangelization — just a way to provide for a need.

Miller talked about her reaction when she arrived for the 25th anniversary Mass.

“To see such a great crowd, and the bishop — thank God it wasn’t raining. It was overwhelming, at first, to think it has been going on for 25 years. Who would’ve thought?”

Bert Egging, also a fair board member and parishioner at St. Dominic Parish in Bremen, has helped to coordinate the Mass over the years. He said the idea to have the bishop come started several years ago: In the hope it could happen in 2017, he approached Father Tony Steinacker, who served the parish of St. John the Evangelist in Goshen for several years until this summer.

Several of this year’s attendees were asked what it has meant to them to have Mass at the fair for 25 years. Egging said simply, “Joy — the joy of the Mass itself, and the joy of seeing all the people attending Mass together from the different churches,” he explained.

Some people who attended this year were unknown to him, he added; others he knew, but didn’t know they were Catholic.

Bill Kercher, a St. John the Evangelist parishioner, said, “I think it shows the presence of the Catholic community within the diocese and its strong presence within the Christian community. With the history of the Mass (here) of 25 years, it’s grown. I think it’s a good thing for Goshen and the community.”

The Houin family from St. Dominic shared that July 23 was the first time they attended a fair Mass. The boys, Matthew and Marcus, were excited about meeting the bishop. Father Charlie said he and his wife wanted to give the boys the different experience of attending an outdoor Mass. He said that as farmers there’s always a strong tie between their faith life and farming, and Mass at a 4-H fair is a way to show that solidarity between the professional and religious environment.

Miller, Egging and Egging’s wife took the bishop on a tour of the fairgrounds following the Mass. Bishop Rhoades was impressed with the fair. “I had no idea it was so big,” he said. He expressed that it would be great to have his family from Pennsylvania come visit during fair week next year.

According to Egging, the bishop got to experience some new foods and toured the majority of the livestock barns. To his surprise, at the Saddle Club barn members asked for and received a blessing for safety.

Bishop Rhoades thanked everyone involved with coordinating the Mass and also thanked them for the invitation. God willing, he said, the celebration of the Mass will continue at the Elkhart County 4-H Fair grounds for another 25 years or more.