St. Adalbert School in South Bend has long had a family-like relationship with students at the University of Notre Dame. Students at Fisher Hall dormitory make time to tutor students at the elementary school, and their annual regatta boat race financially benefits the children as well. Recently the university partnered again with St. Adalbert, this time to provide needed science materials.

Familiarity with scientific processes is a highly sought-after skill in today’s job market. Teaching hands-on lessons can become costly, though, especially in schools where resources are already stretched. With 70 percent of St. Adalbert School comprised of English language learners, principal Joseph Miller admitted “we don’t always give science the attention it deserves.” The school is small and attended by a number of lower-income families. 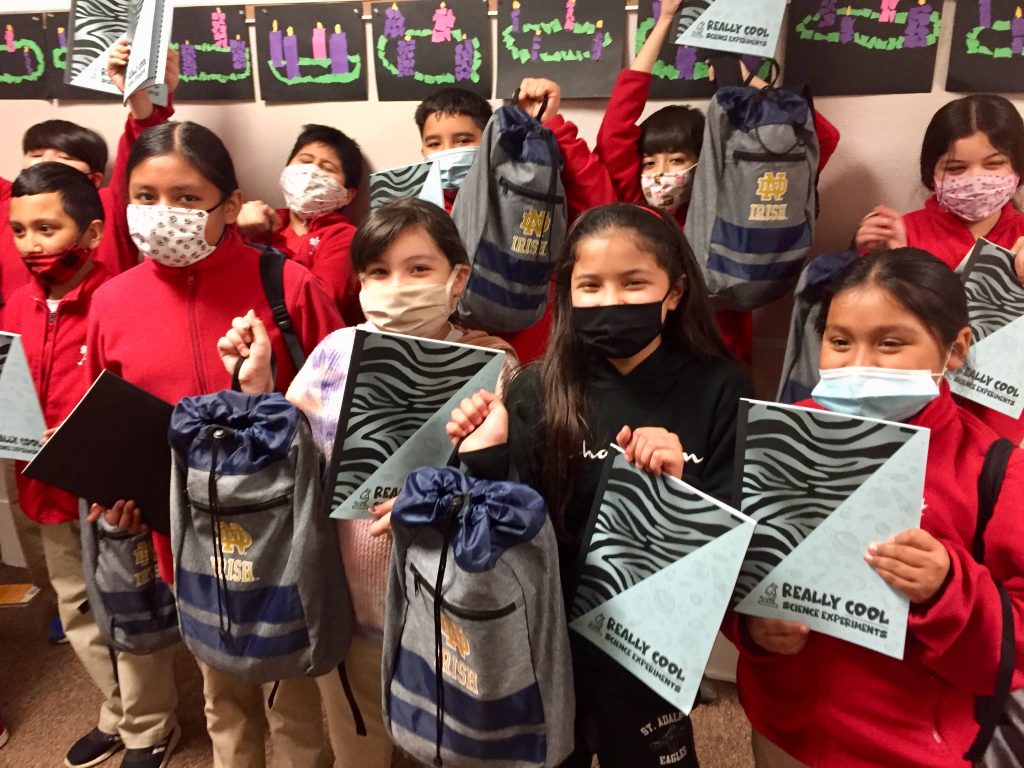 Provided by Jennifer Miller
Backpacks full of at-home science experiments elementary students can perform are delivered to a beaming group of St. Adalbert students in December. Several members of the University of Notre Dame community came up with the idea, obtained funding, compiled the kits and identified recipient schools like St. Adalbert, where students could use assistance in obtaining more access to scientific ideas and experimentation.

Dr. Cara Ocobock is a professor of anthropology at Notre Dame. She took interest in collecting supplies for scientific experiments when her niece, Ruby, developed an interest in the subject. To meet her niece’s hunger for knowledge, Ocobock gathered materials and information into a kit that came into huge demand after going viral on her professional website and Twitter account.

Morgan Munsen, community director of the Science Policy Initiative at Notre Dame and lead organizer of the Michiana Science Café, is a colleague of Ocobock’s and learned about the science kits from her.

“With all that buzz, she had started to get an idea about trying to make this lab manual accessible for students in the South Bend area, and we immediately started running with the project,” Munsen explained. The lead team included Munsen and Ocobock as well as the co-presidents of Michiana Science Café, Robert Stanley and Sasha Padilla-Coley.

Eventually, the team had to decide with which school or schools they wanted to work.

“We wanted to focus on where these materials could hopefully do the most good — which is why we wanted to focus on students from diverse and/or low-income backgrounds,” Munsen said. Her husband teaches middle school religion at St. Adalbert, so she immediately thought the school would be a good fit for the mission. “We were delighted that the principal, Joe Miller, had an immediate, positive reaction and was willing to partner with us.” 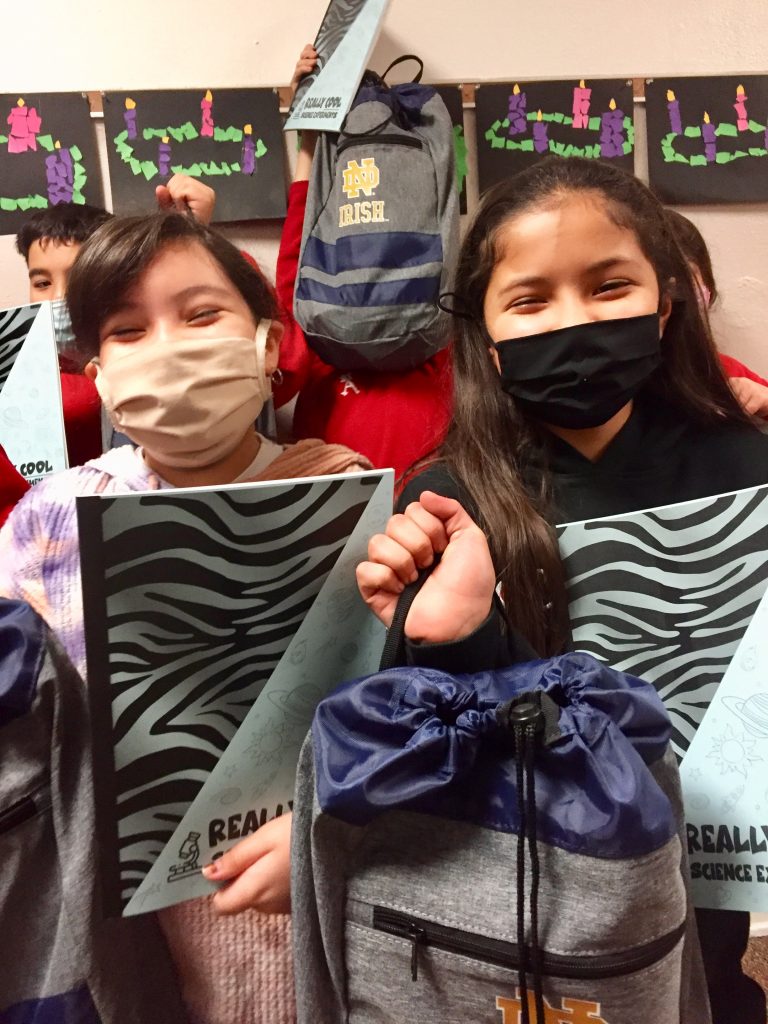 Miller was more than receptive to the idea, in fact. He stated, “It was a great way to get hands-on experience for our students.”

Munsen applied for grants from the Center for Social Concerns at Notre Dame and the National Science Policy Network to purchase materials. She then made a deal with the campus bookstore to acquire backpacks in which the materials could be stored, at a reasonable cost. But before the kits could get into the hands of students, the manual, which had initially been written in English, needed to be translated into Spanish for families at home who were fluent in that language.

After the translation was completed, the kits were assembled at the university and taken to St. Adalbert. One hundred and twenty-five backpacks filled with science kits and experiment manuals were delivered for students to use at home.

The backpacks arrived just before Christmas, which worked out phenomenally, as the students were able to take them home over the break. St. Adalbert began the new semester in virtual mode, so teachers are able to have the children use the materials at home during virtual lessons taught through Google Learn.

According to Munsen, students in grades one through 6 were the first ones to receive the kits, because of the age-appropriateness for the experiments in the manual as well as the funding they had received. She and the rest of the team hope to secure more grant money to create kits for the seventh and eighth graders so that every student at the school has access to the experiments.

The group hopes to continue with this program, partnering with additional schools each year so more and more students might benefit from it.

The kits themselves are comprised of items not typically found in the home, but often needed for science experiments, such as earth magnets, petri dishes with agar, bean seeds, liquid starch and borax. The remainder of the necessary items would be typical household items.

“We’re super-grateful,” Miller said. He told of “how excited our kids were to get these” and the gap that the kits will help fill in their education.