WASHINGTON (CNS) — In the nation’s capital, a $15 museum ticket and pair of 3-D glasses is the passport Christian pilgrims and others need to experience what may be the holiest site in Christianity.

Employing state-of-the-art technology, the National Geographic Museum in Washington Nov. 15 opened an exhibit that virtually transports visitors to the streets of Jerusalem and through the doors of a small church that protects what is believed to be the site of Christ’s burial and, to Christians, the site of his resurrection.

“We put you in the Old City, we talk to you a little about the walls of the city, how they move over time and where the Gospels say that the Crucifixion took place, and try to give you the context,” said Kathryn Keane, vice president of exhibitions for National Geographic during a Nov. 9 interview with Catholic News Service.

After an introductory video explaining some of the tumultuous history surrounding the tomb of Christ site, where structures above have been built and torn down repeatedly over the centuries, visitors walk toward a set where a virtual guide projected on a wall welcomes them to a courtyard just outside the Church of the Holy Sepulcher in Jerusalem. 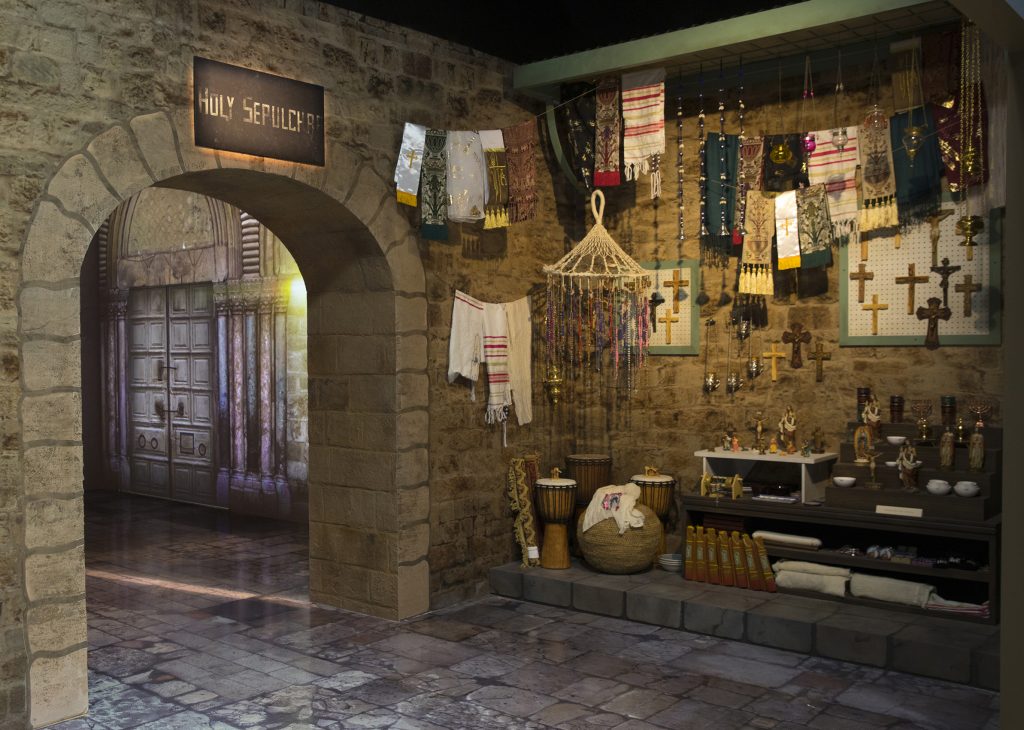 It’s a visual appetizer to get them ready for the experience of, not just entering via 3-D through its doors, but also of flying over it and witnessing, from a bird’s-eye view, a time-lapse of the structure’s physical history.

“We’re not only taking you in the church the way it looks today but we also go up above the church and we take you back through time,” said Keane. “It’s a bit of a time machine and we show you all the evolutions of the building, from the time that it was, under (Roman emperor) Hadrian, a pagan temple.”

“This is not what I would consider a traditional exhibit. It’s more an experience than it is an exhibit,” said National Geographic archaeologist Fred Hiebert, whose unique experience inside the church led to “Tomb of Christ: The Church of Holy Sepulchre Experience,” which runs at the Washington museum until August 2018.

Last year, Hiebert witnessed various stages of a nine-month-long, $3 million restoration of the small shrine within the Holy Sepulcher that protects the tomb of Christ. The shrine often is referred to as the Edicule, Latin for “little house.” During the process, the three religious groups with jurisdiction over the structure, and who had agreed on its restoration — the Armenians, the Franciscans and the Greek Orthodox — agreed to also allow restorers to put a moisture barrier around the tomb itself.

The tomb likely had not been opened in centuries and, at some point, marble slabs were placed on top, perhaps to keep pilgrims from taking home parts of it. It has been venerated since the time of Constantine, the first Christian Roman Emperor who, in the fourth century, sent a team in search of the holy burial site. Soon after, they identified a quarry as that place and Constantine’s mother, Helena, had a shrine built around it.

The exhibit explains how the effects of weather, earthquakes and also great numbers of pilgrims, many of whom light candles that contribute to a buildup of soot, had brought the structure to the brink of collapse.

It also explains the dilemma religious leaders faced when they learned that by injecting liquid mortar into the shrine to reinforce it, it presented the possibility that it would seep into the tomb itself — defeating the purpose of protecting the most important part. They had to swiftly decide to shut down the shrine to allow the team to protect the tomb — and that meant briefly opening it.

When restorers temporarily shut down the site, Hiebert and other members of the National Geographic team were present to witness the opening of the tomb, which exposed the original limestone bed and the walls of the cave, which Christians believe witnessed Christ returning to life.

“To think that we, we were some of the few people who were locked in that church, got to see what people for hundreds and hundreds of years of Christianity hope to see, and we had a chance to see that … if there’s anything that drove me to do a virtual exhibit, it was that guilt,” Hiebert said to an audience gathered at the museum on the opening night of the exhibit. “We have to tell the world about this.”

The National Geographic team scanned the Church of the Holy Sepulcher and the smaller structure inside, the Edicule, in such detail, that visitors who stop by the exhibit can don a VR, or virtual reality, headset and enter the tiny shrine, navigate the small passage way that leads to the tomb, a space that accommodates no more than three or four people, and see an exact visual representation of the tomb, without the real-life inconveniences.

“As tourist, you get maybe 15 seconds in the tomb and then they move you out,” explained National Geographic engineer Corey Jaskolski at the opening night event. “Part of capturing this and being able to share it with the world through the National Geographic Museum is that we can let people spend as long as they want in the tomb. You can go in there and have your own personal experience and be able to see it in all its glory without the interruptions and bustle of the crowd around.”

The exhibit displays the document that Greek Orthodox, Armenian and Franciscan leaders signed in 2016, which made the restoration possible, while also noting in a timeline that the groups had agreed in principle in 1959 that the “little house” needed the renovations.

Hiebert applauded the cooperation among the religious groups as “brave” and said of their ability to agree, “That happens once in a lifetime with these guys.”

The project shows, Hiebert said, that there can be cooperation among different groups in the Middle East.

“Having reviewed the history of the (Holy Sepulcher) church, and realizing that it’s a contested space, in a contested area … here was a project that was bringing people together to do something that was positive,” he said. “That is a metaphor for optimism in the Middle East. In a place as difficult as Jerusalem, as complex as the Middle East, it’s still possible to do an optimistic idealistic project.”

Archaeologist Hiebert said the exhibit, as well as a TV show about the restoration of the tomb of Christ that National Geographic documented, will debut Dec. 3 on its cable channel. The December cover story of National Geographic magazine also focuses on archaeology and what it reveals about the life of Christ. It shows that science and faith can go hand in hand, Hiebert said.

“When we look back on the history of exploration and even the history of National Geographic, we realize that this idea that science is divorced from faith is not true,” he said. “It seemed to me natural that National Geographic would be in a position of, here’s a site, which is sacred and historic, and we’re about to embark on an epic adventure.”