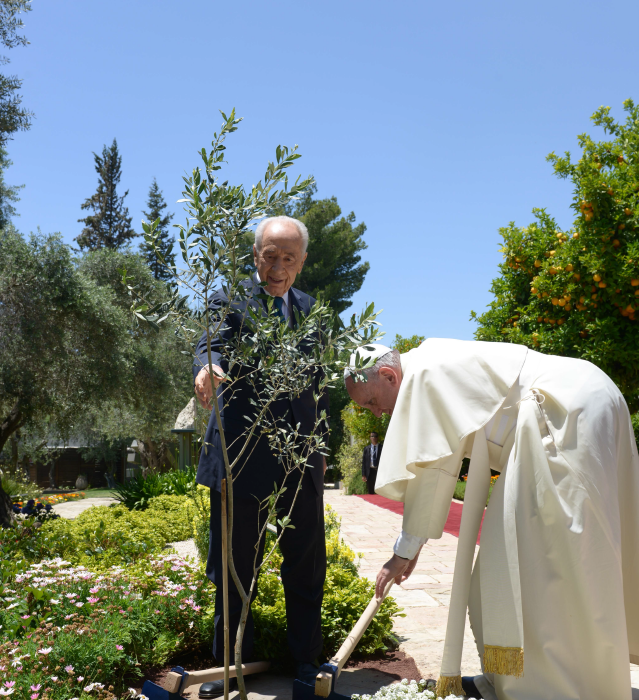 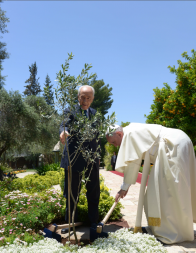 A pictorial exhibit of 44 historic images depicting stirring scenes as well as quiet, intimate moments during papal visits to the Holy Land from 1964 to 2014 will soon be on display at the Jewish Federation of Fort Wayne’s Rothschild Center. The visits were made by some of the most well-traveled popes in history: Blessed Pope Paul VI, St. Pope John Paul II, Pope Emeritus Benedict XVI and Pope Francis.

Jointly sponsored by Aviv Ezra, consul general of Israel to the Midwest, and Bishop Kevin C. Rhoades of the Diocese of Fort Wayne-South Bend, the exhibit is designed to engage the broader community and illustrate the positive interreligious dialogue between Catholics and Jews.

The diocese’s co-sponsorship is an expression of support for the exhibit, noted Bishop Rhoades. Executive director of the Jewish Federation, Jaki Schrier, called it “the Jewish community’s early Christmas gift to the Catholic community.”

Titled “The Popes’ Visits to the Holy Land: Building Bridges of Faith,” the photographs displayed feature papal visits to nearly a dozen Holy Land sites, including the Church of the Holy Sepulchre, recognized as the site of the crucifixion and tomb of Jesus of Nazareth; Yad Vashem, Israel’s official memorial to the victims of the Holocaust; the Cenacle on Mount Zion, traditionally held to be the site of the Last Supper; and the Western Wall.

“I am deeply grateful to the Jewish Federation of Fort Wayne for co-sponsoring the exhibition of the historic visits of our recent Popes to the Holy Land. I am looking forward to seeing the exhibition and encourage the Catholics of our diocese to join our Jewish brothers and sisters in visiting the exhibit,” said Bishop Rhoades, who also shared a personal note.

“I recall with particular clarity watching the visit of Pope Saint John Paul II during the Jubilee Year 2000. It was riveting to watch the frail John Paul, who lived through the terror of the Holocaust in Poland and lost many Jewish friends in that Nazi evil, pray at the eternal flame at Yad Vashem. After silent prayer, he shared that he had come to Yad Vashem ‘to pay homage to the millions of Jewish people who, stripped of everything, especially of their human dignity, were murdered in the Holocaust.’ He said that he wished to remember ‘for a purpose, namely, to ensure that never again will evil prevail, as it did for the millions of innocent victims of Nazism.’ The Holy Father then, as he had so often in his pontificate, condemned any forms of anti-Semitism. The pope then walked slowly and painfully to greet seven Holocaust survivors and took each one by the hand, a sincere and moving gesture of profound respect and love.”

He continued: “Also on that visit to Israel, Pope John Paul II prayed at the Western Wall, the holiest site of Judaism. There he did what so many pious Jews have done through the centuries: he left a prayer-petition in one of the wall’s crevices. I look forward to seeing the photographs of this visit and of the visits of other Popes, visual reminders of the mutual respect, closeness and solidarity we are called to have in our relationship as Jews and Christians, as sons and daughters of God.”

The public is welcome to view the archival images at the Rifkin Campus, 5200 Old Mill Road, Fort Wayne.  The exhibition opens Mon., Dec. 5, and will remain through Thursday, Dec. 15. A special introductory program, also open to the public, will take place Mon., Dec. 5, at 7 p.m. Special guests for the event will be Bishop Rhoades; University of Saint Francis President Sister Elise Kriss, OSF; U.S. Senator Joe Donnelly; and Itai Milner, deputy consul general of Israel to the Midwest. Each will briefly welcome those in attendance.

The keynote speaker for the evening will be Rabbi Yehiel Poupko, Rabbinic scholar at the Jewish United Fund/Jewish Federation of Metropolitan Chicago. His topic will be the advancement of Roman Catholic Church relations with the Jewish people under the stewardship of St. Pope John Paul II, Pope Benedict XVI and Pope Francis. A celebratory reception and refreshments will follow the evening’s program.