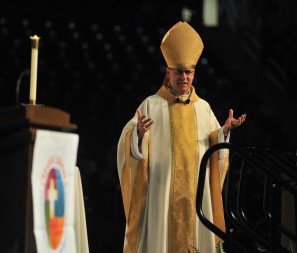 That was the cry uttered by young José Sánchez del Río, a Mexican Cristero, as he was tortured and martyred by Mexican government officials for refusing to renounce his faith during his country’s Cristero War of the 1920s.

The cry was repeated by over 4,000 youth at the Diocese of Fort Wayne-South Bend All Schools Mass in South Bend on Oct. 10.

The Cristeros were citizens and believers who resisted the federal government’s brutal suppression of the Catholic faith. José Sánchez del Río, or “Joselito,” as he was called, was only 13 years old when he refused to apostatize his Catholic faith. He chose, instead, the alternative he was given: to have the bottoms of his feet cut, be forced to walk toward the cemetery and beaten with a machete as he stumbled through town. All he had to do was announce “death to Christ the King” and he would have been spared. Instead, he shouted “¡Viva Cristo Rey!” Upon arriving in the cemetery, and moments after drawing a cross in the cemetery dirt, Joselito was shot and killed. 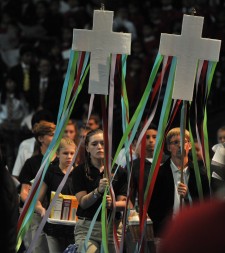 The entrance procession was led by two students bearing crosses. Behind them, a representative of each school brought food donations to be given to a local food pantry.

“José Sánchez del Río was only 13!” Bishop Kevin C. Rhoades, celebrant of the Mass, said during his homily, after telling Joselito’s story. He asked all those present who were also 13 years old to raise their hands. In a booming voice, he announced: “You can be saints!”

Filling the floor of Purcell Pavilion, the fourth-grade students in attendance had each dressed up as their favorite saint. During his homily, Bishop Rhoades invited those dressed as St. Teresa of Calcutta to come to the stage to tell about her life.

St. Teresa “helped the poor and the sick,” bringing them “to a place where they could help them,” said Monica, from St. Joseph parish. “Love,” she added, “is the most important thing Mother Teresa gave the poor.”

The central message of the Mass was that everyone can be a saint, and that we become saints through love. “Love God; Love your neighbor” Bishop Rhoades shared, echoing the words of Jesus in Luke 18.

The invitation to love God and love one’s neighbor was present from the very beginning of Mass, when some students processed down the aisle carrying baskets of food to be donated to a local pantry.

The Mass also focused on the Year of Mercy, with Bishop Rhoades stating this year’s All-Schools Mass was especially important because it took place within the Year of Mercy. During communion, the choir, comprised of students from across the region, sang the World Youth Day theme song: “Blest are the merciful/For it is mercy that shall be shown to those who show mercy”

“Saints,” Bishop Rhoades reminded the youth, “were all men and women who were merciful. All my fourth grade students are dressed as saints here today: Now, go out and be saints!”