The theme of Catholic identity carried through inauguration weekend events that took place Sept. 26 for Father Dr. Eric A. Zimmer, the new president of the University of Saint Francis, Fort Wayne.

Bishop Kevin C. Rhoades spoke about the characteristics of an “authentic” Catholic university education during his homily at a Mass that morning celebrated at the Cathedral of the Immaculate Conception to mark the occasion. During his inaugural address that afternoon at USF’s Goldstine Performing Arts Center, Father Zimmer stressed that USF’s Catholic identity makes it distinctive. He pledged to work to expand the Catholic nature of the school.

“The mission of an institution does not just happen,” said Father Zimmer, who is the 10th president of the university founded and sponsored by the Sisters of St. Francis of Perpetual Adoration. “It is worked on each and every day.”

Attendance was limited to 130 people at the Mass and 250 people at the inauguration ceremony. Those in attendance wore masks and practiced social distancing according to COVID-19 safety precautions. The USF community and the public could watch both events on a livestream on USF’s YouTube channel. 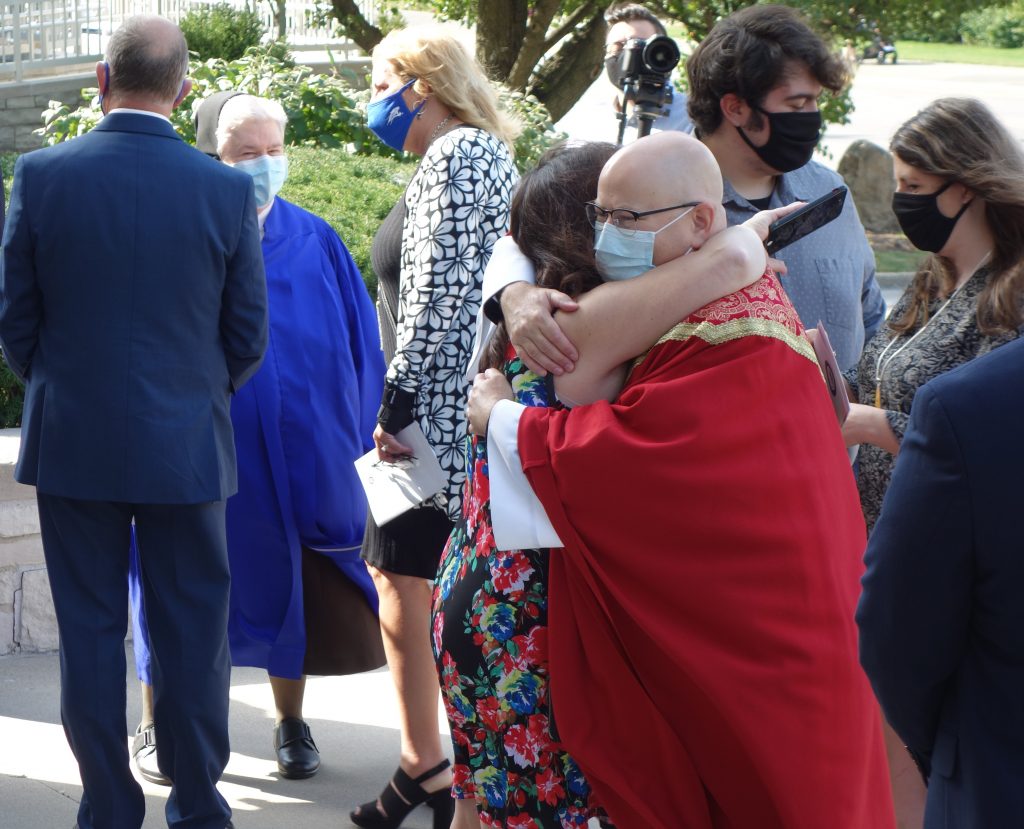 Kevin Kilbane
Father Dr. Eric A. Zimmer hugs a member of his family after the Mass for his inauguration as president of the University of Saint Francis. The Mass took place Sept. 26 at the Cathedral of the Immaculate Conception in Fort Wayne.

Those starting the day with the Mass included members of Father Zimmer’s family and parishioners from St. Patrick Parish in Walkerton, where he had served as pastor from January 2016 until starting work July 1 as USF president. He succeeds Sister M. Elise Kriss, who retired June 30.

The Mass began with faculty and officials in academic robes — some in black and others in USF bright blue — processing down the cathedral’s main aisle to sit in pews at the front of the church. They were followed by several priests and then Father Zimmer and Bishop Rhoades, all in red vestments.

When he asked Father Zimmer what Mass he would like to celebrate for his inauguration, the new president chose the Votive Mass of the Holy Spirit, Bishop Rhoades said during his homily. 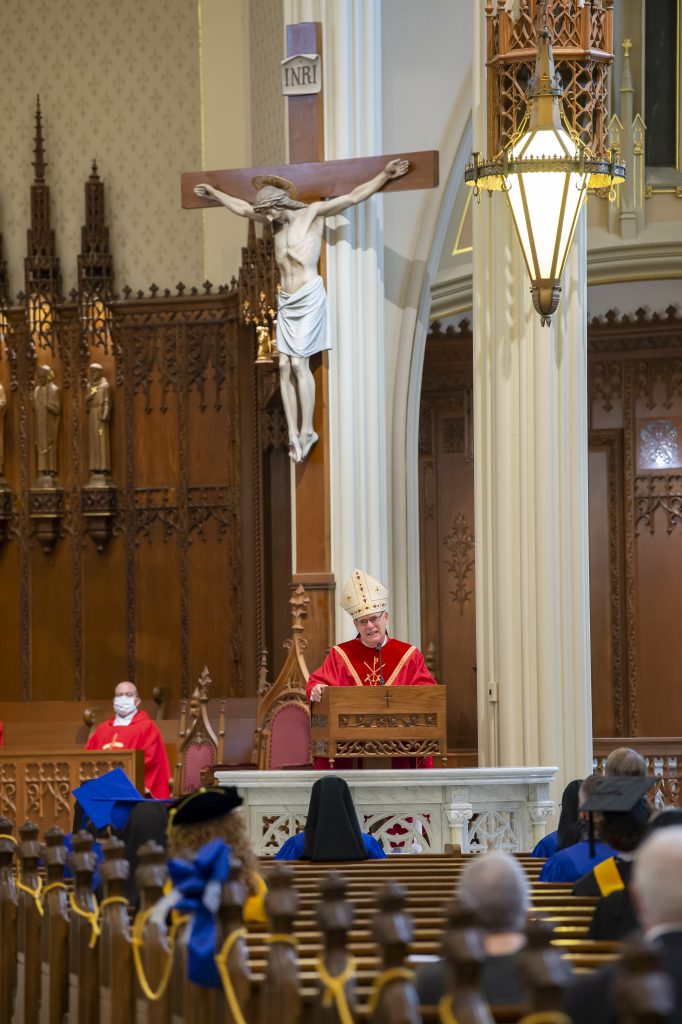 In the Gospel for the Mass, John 14: 23-26, Jesus refers to the Holy Spirit as “the Advocate.” That is a translation of the Greek word “Parakletos” or “Paraclete,” which means someone called to one’s side to assist the person, the bishop said. “We join Father Zimmer today in asking the Holy Spirit to assist him, to counsel him, to guide him in his leadership of the University of Saint Francis.”

Working as president of a Catholic university is one of the most challenging jobs in the Catholic Church, after that of serving as a bishop, Bishop Rhoades noted.

“We are grateful that Father Zimmer has accepted that challenge. He does so with faith and confidence in the Lord and with reliance on the Holy Spirit.” He added that Father Zimmer is committed to providing an authentic Catholic education.

“An authentic Catholic university is a community united in a common effort to find truth, goodness and beauty. It values the rich Catholic intellectual tradition. It sees faith and reason as complementary ways of getting at the truth.” 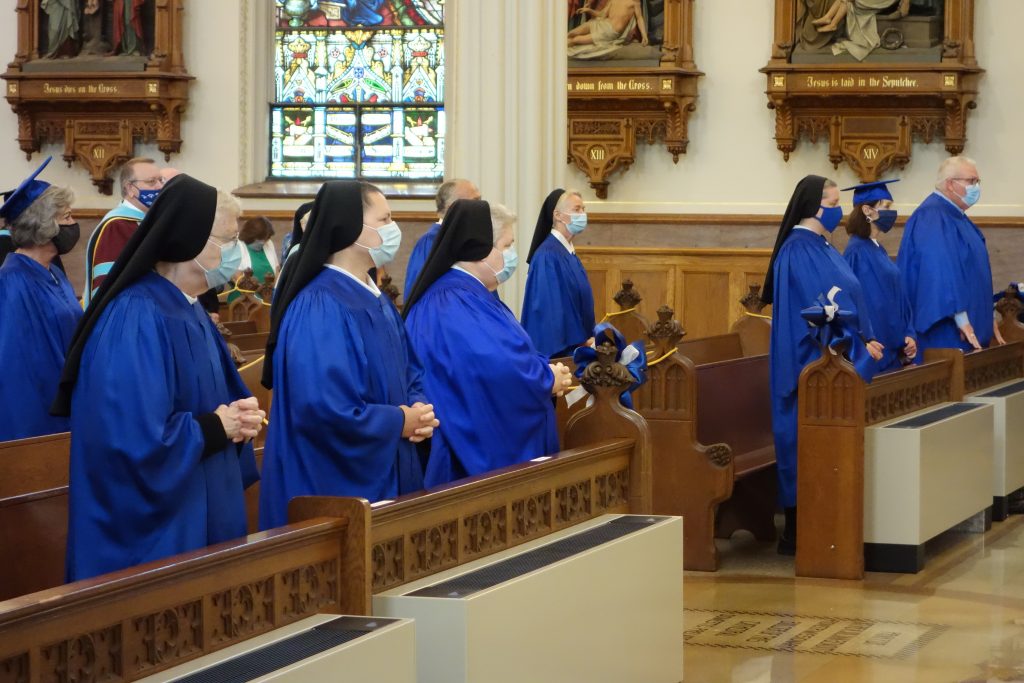 Kevin Kilbane
Members of the Sisters of St. Francis of Perpetual Adoration, the religious order that founded and sponsors the University of Saint Francis, were among those attending the Mass of inauguration of Father Zimmer as USF’s new president.

The bishop also thanked the Sisters of St. Francis of Perpetual Adoration, whose members founded what is now USF in 1890; Father Zimmer; and the USF board of trustees, faculty and staff for their commitment to preserving and strengthening the university’s Catholic identity.

Following the homily, Bishop Rhoades invited Father Zimmer to make a profession of faith and to take the oath of fidelity the Catholic Church requires of all presidents of Catholic colleges and universities. In taking the oath, Father Zimmer pledged to preserve union with the Catholic Church, to adhere to its beliefs and to follow the leadership of bishops and Church leaders. 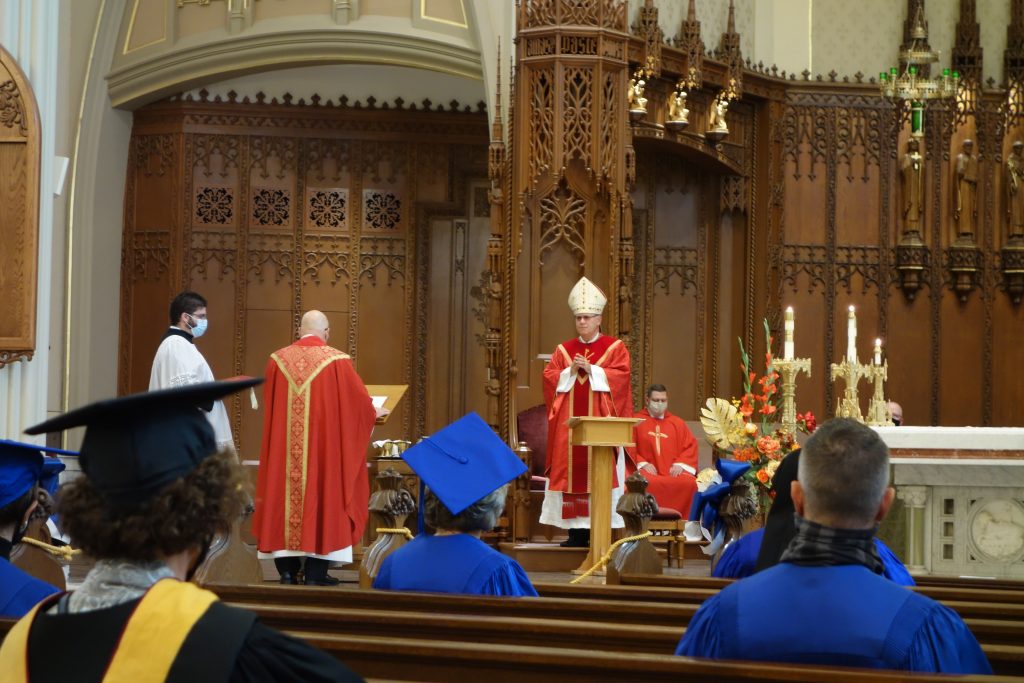 Kevin Kilbane
Father Dr. Eric A. Zimmer, left, made a profession of faith and oath of fidelity to the Catholic Church during Mass on the occasion of his inauguration as the new president of the University of Saint Francis. The Mass was celebrated by Bishop Kevin C. Rhoades Sept. 26 at the Cathedral of the Immaculate Conception in Fort Wayne.

The afternoon inauguration ceremony began with representatives from the student body, faculty, alumni, board of trustees and guests welcoming Father Zimmer and wishing him well in his new role.

The speakers included Sister Clare Reuille, provincial treasurer for the Sisters of St. Francis of Perpetual Adoration, who have their provincial motherhouse in Mishawaka.

This is the first time in USF’s 130-year history that its leader hasn’t been a member of their religious order, Sister Clare said. She thanked Father Zimmer for accepting the job and all those involved in making it possible.

“You are an answer to our prayers,” she told him. “We pledge our continual hourly and daily prayers for you and the University of Saint Francis.”

After stepping to the podium to give his inaugural address, Father Zimmer said many of America’s well-known colleges were founded by a religious denomination or faith tradition. Some of those universities since have shifted their missions away from those roots.

To succeed and thrive, he believes USF must offer students and families a unique Catholic experience.

“I want us to be distinctive,” he said. “I want us to be a place where faith and reason are complementary.” Students and faculty should feel comfortable talking about their faith in the hallways or in classrooms.

The university has taken steps in recent years to strengthen the faith life of students and staff.

In 2016, USF instituted sacred time. Each day at the time Mass is celebrated on campus, no university-sponsored activities can take place on campus so students and staff can attend Mass or take time for reflection or personal prayer. In 2018, USF dedicated its St. Francis Chapel, the first free-standing chapel on its main campus.

In addition, all USF students take core classes that teach them the values of St. Francis and how to use them in their life. Those values are:

— Reverence for the dignity of each person

— Encouragement of a trustful, prayerful community of learners

— Service to each other, society and the Catholic Church

— Working for peace and justice

Father Zimmer said USF will take other steps to strengthen the Catholic nature of the university, a goal requested of him by the Sisters of St. Francis of Perpetual Adoration.

He hopes to hire a priest full time who will staff the St. Francis Chapel and serve as a faith resource for students, faculty and staff.

USF will update its core classes to focus them more closely around the university’s Catholic identity. He also will explore possible use of evaluations to determine if students are learning the Franciscan values taught in the classes.

The university has put into action initiatives to increase the percentage of its students who are Catholic: among those are a new scholarship program started with a gift of $50,000. Currently, about 30% of USF’s 2,271 students are Catholic, Father Zimmer said. He hopes the university can offer more scholarships to students graduating from Catholic high schools, to encourage them to attend USF.

Recent years have been difficult for colleges. Many have closed, including some Catholic universities, he said.

“That will not be the University of Saint Francis,” he vowed.

To view a replay of the USF inauguration Mass, go to https://www.youtube.com/watch?v=qaGJuXTFmbc. 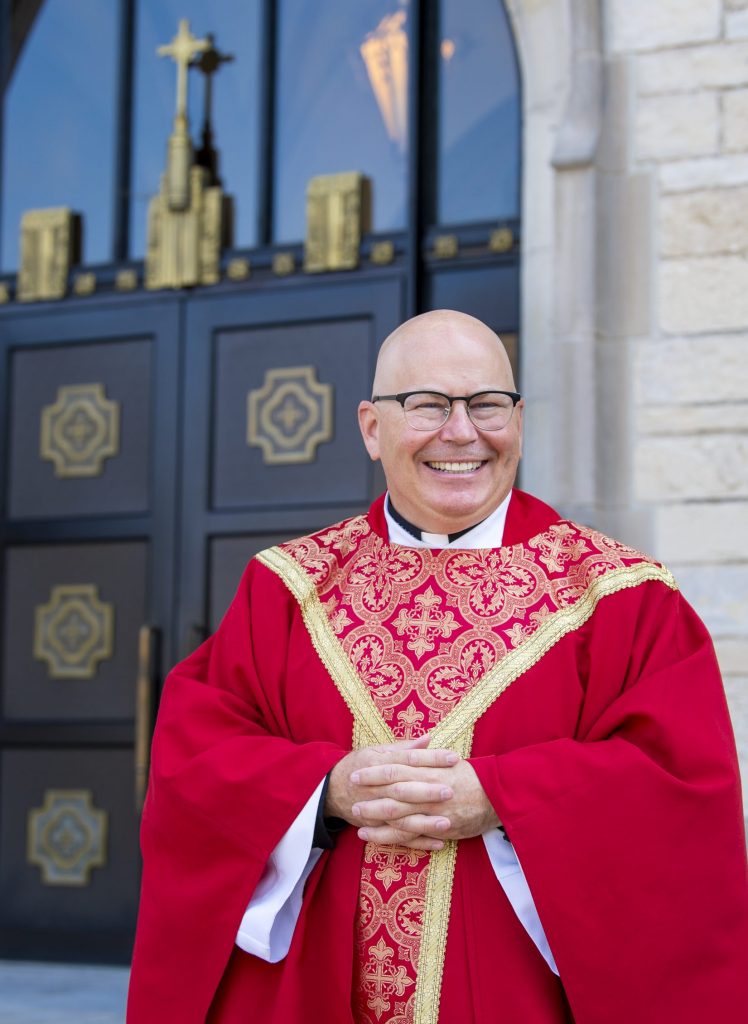 Describing himself in his inaugural address as an “unreformed and unrepentant English teacher,” Father Dr. Eric A. Zimmer brings an array of skills and experiences to his role as president of the University of Saint Francis.

A former Jesuit priest who grew up in suburban Detroit, Father Zimmer is a first-generation American college graduate. His parents immigrated to the United States from Canada in the 1950s. He appreciates USF’s ability to provide a good college education for students who may have trouble getting into college or going away to school.

Father Zimmer began his education career as a high school English teacher and later moved into other fields at the college level. He taught full time for seven years at the Mendoza College of Business at the University of Notre Dame. He taught and served as director of leadership development at the Creighton University School of Medicine in Omaha, Nebraska, and also taught previously at Georgetown University in Washington, D.C., and the University of Washington’s Rome campus.

He helped with fundraising at Notre Dame, Creighton and the National Office for Post-Abortion Reconciliation and Healing. He also created Jesuits.net, an online networking and communications tool used internationally by Jesuits.

Before starting work July 1 at USF, Father Zimmer also served as pastor for more than four years at St. Patrick Parish in Walkerton. Prior pastoral experience includes working with the Hispanic community in Omaha, Nebraska, and inner city and ground zero areas in New York City, as well as serving overseas in areas such as Nepal, India, Chile, France and Italy.

Looking ahead, Father Zimmer sees challenges and opportunities for USF.

A declining U.S. birth rate means fewer students will be enrolling in colleges and universities, he said in an interview before his inauguration. However, about 25% of USF students are Black or Hispanic. Those communities continue to grow in population, which should benefit USF, he noted.

The university broke ground Sept. 18 on a $7 million new building at its Crown Point campus in northwest Indiana. The building will allow USF to double enrollment there to 400 students from the current 200, Father Zimmer said.

The university also is in conversations with health care systems to have USF health career programs embedded in their hospitals, he said. That would give students even more real-world experience.