In the 16th century, Christianity was rocked by scandals and trials, and the Church found herself torn asunder by the Protestant Reformation. Changes needed to happen, and so began the Catholic Counter-Reformation, or the Catholic Revival, an astounding period of vibrancy and renewal that inspired some back to the faith and others to die painful deaths for it. Great saints arose during this time, transforming the Church and spreading its light through the world.

The 21st century is experiencing a different kind of crisis – not that of Christian doctrine, but of a post-Christian world of materialism and secularism. The sacredness of the Eucharist is in question for far too many Catholics. The U.S. Conference of Catholic Bishops has set about to change this with the announcement of the three-year Eucharistic Revival. Its purpose is to promote and deepen faith in the True Presence.

The first major piece of the revival is the Eucharistic Procession and Festival, to be held on June 19 in Warsaw. Chris Langford is the point person for this movement in the Diocese of Fort Wayne-South Bend. He explained his part in the revival as a liaison between the diocese and the USCCB, which provided a framework and “a sizeable list of the fruits that are desired in the Church through the revival,” he said. He works with the parish point persons, who coordinate revival activities in their individual parishes where the next phases will occur.

Of the procession, Langford stated that: “One of the objectives or purposes of having a Eucharistic procession is to give public witness to our faith in Christ in the Eucharist.”

While parishes sometimes host their own Eucharistic processions on public streets, nothing of this scale has been held in the diocese in recent memory. Langford considers this an incredible opportunity to evangelize Christians and non-Christians alike. In fact, he shared that: “As I understand it, there are several non-Catholic churches that will be joining us in the procession.” 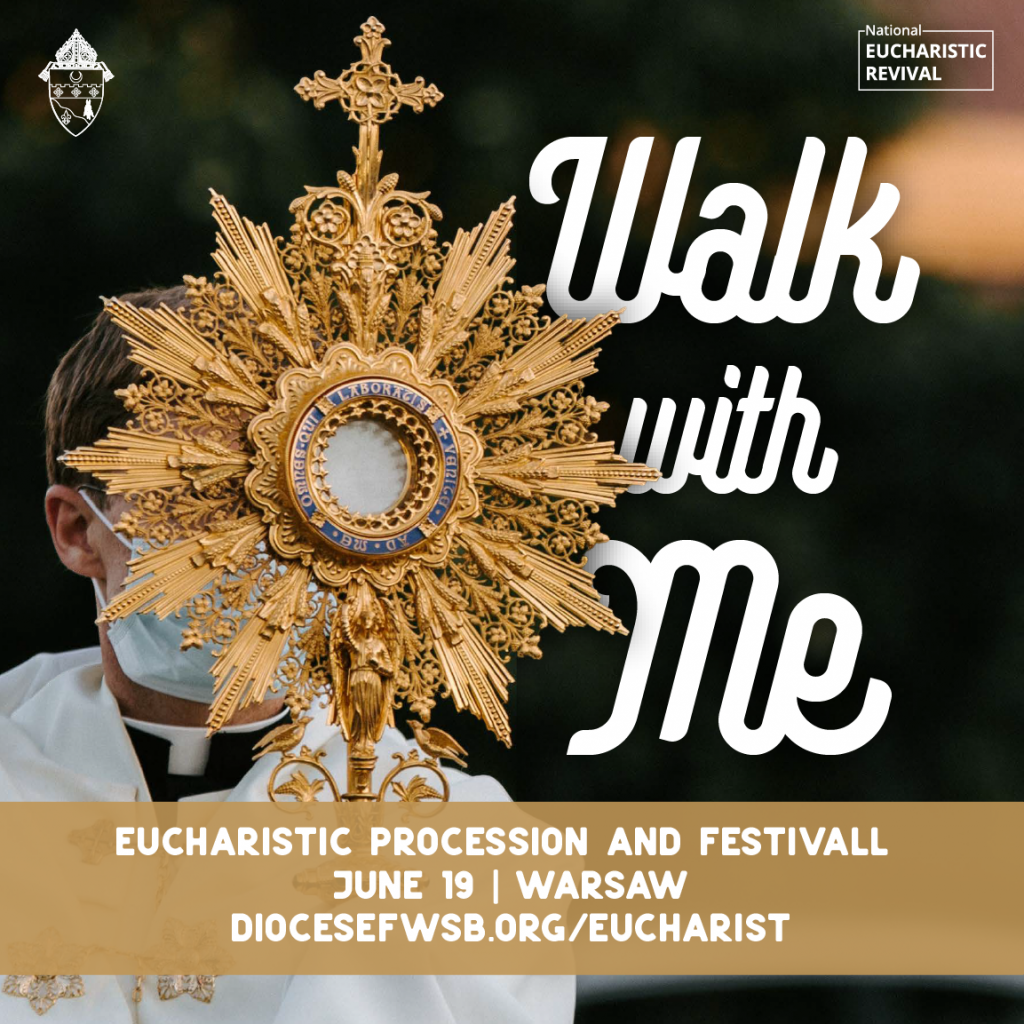 The response at the parish level has been excellent, Langford reported.

Father Stephen Felicichia professed great enthusiasm for the event and promotes it both at St. Elizabeth Ann Seton Parish in Fort Wayne, where he serves as Parochial Vicar, and through “The Deus Vult Podcast,” hosted by him and Father Dan Koehl.

Other groups host parades embracing false religions and ideologies that do not satisfy the human soul, so he believes the Catholic Church can and should do the same to promote worship of the one true God. He stated, “We need to be proudly proclaiming: ‘Jesus Christ is alive, He’s risen, and in our tabernacles, and this is His planet and His territory.’” Eucharistic processions, once regular occurrences, now faded from common practice, were the early Church’s parades.

The 2.8 mile journey might be difficult for some; it might feel uncomfortable to participate in a public demonstration of faith, yet why should Catholics shy away from the most important thing about themselves? It takes a certain level of boldness to make a public stand for what one believes. “But there it is, it demands something of you – worship demands,” Father Felicichia stressed. “Why wouldn’t you embrace the good with all of your heart? You might become a saint.”

He poses this question: “What are you going to do with your time, how do you answer to God for how you spent your time?” If the time and money a person spends in his or her life indicates what they love, a Catholic should love Jesus wholeheartedly enough to spend time with Him, Father Felicichia said.

“Let’s make the diocese 100% Catholic; let that be our goal, because that’s Jesus Christ’s goal,” he continued. 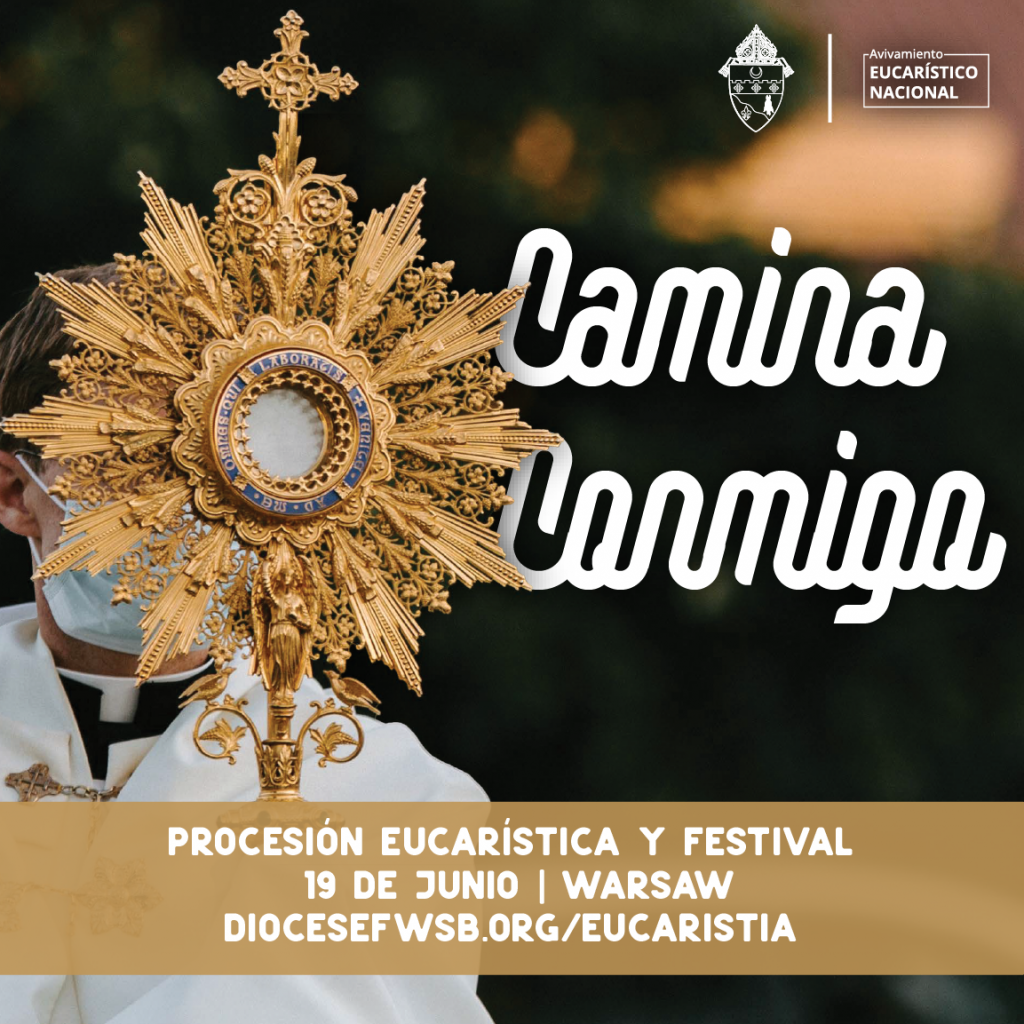 That cannot be accomplished without the cooperative efforts of Church members. To that end, he recommends that those planning to attend the procession notify friends, family members and anyone else they encounter and invite them to come along. The easiest way is by simply asking – by starting conversations about what the Eucharist truly means to oneself and to others.

“Does a good Christian not stand up for Christ? You are being called by your bishop. Go! It’s just that simple,” he stated.

Uniting in worship of Jesus Christ at the Eucharistic Procession does not require a common language, race, age group, or physical or mental ability. In fact, Langford remarked that, “The sacrament of the Eucharist is that instrument that the Lord has given us to bond us together as one.”

“We are also very pleased and excited about the cultural dimension of the procession and the festival,” he continued. There will be three stops along the route where altars will be set up and the procession will pause for benediction. At these stops, hymns will be sung in English, Spanish, Vietnamese, Latin, Burmese and the Igbo Language (a dialect of South-East Nigeria), as well as African Spirituals. At the festival afterwards, many of these ethnic groups will offer international foods for purchase, along with presenting music and dance from their respective cultures.

The route is completely wheelchair accessible. Those who might have difficulty walking the entire route are also welcome to join at one of the partial routes available. Shuttles will move between the altars along the route, some of which accommodate wheelchairs.

If the Church is to experience a revival as it did in the 16th century, Catholic men and women of today must be the ones to stand fast and lead it. For anyone hesitant to attend, Father Felicichia urges, “Approach Jesus Christ to the best of your ability. Is it in your power to go to Warsaw and walk three miles? Is it? Then don’t be afraid; He’s asking you to do this – for the sake of the savior, Jesus Christ.”

Information on the procession is available on the website,
www.diocesefwsb.org/eucharist.