The U.S. Conference of Catholic Bishops, in the middle of drafting a teaching document on the Eucharist, received words of advice from a panel convened July 28 to discuss the challenges facing the American Church as it emerges from the coronavirus pandemic and seeks to overcome divisions that threaten Church unity.

They heard about the importance of bishops being pastors rather than “chaplains to factions,” the need to communicate Church teaching clearly and without fear, and hearing from as many voices as possible in the weeks remaining before they consider the document during their fall general assembly in November.

The 75-minute discussion left Bishop Kevin C. Rhoades of Fort Wayne-South Bend, Indiana, with ideas to share with the document’s drafters working to strengthen the foundation of the Eucharist being the source and summit of Catholic life. 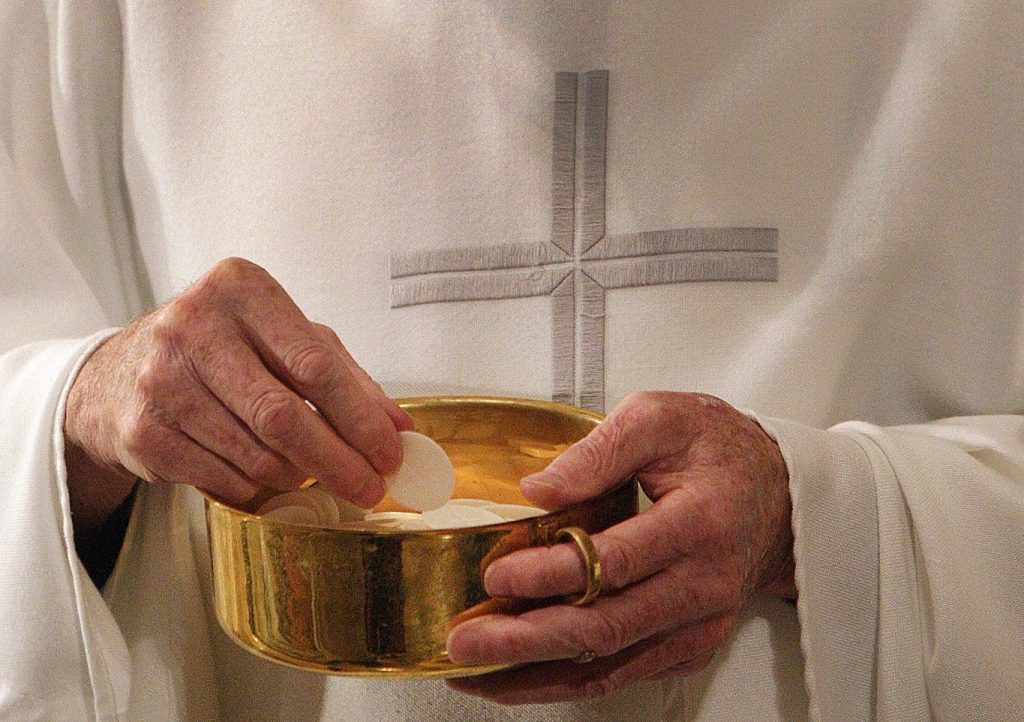 A priest prepares to distribute Communion during Mass in Washington in this 2011 photo. (CNS photo/Bob Roller)

Bishop Rhoades is chairman of the bishops’ Committee on Doctrine, which is charged with drafting the document.

He acknowledged the path ahead poses challenges, but it is one the doctrine committee is prepared to address.

“The goal of the document is to contribute to the eucharistic revival,” he said, recapping the USCCB strategic plan for 2021-24 that is focused on the Eucharist being the foundation of Christian life.

“We’re striving to write a document that will contribute to a real eucharistic revival in the Church in our nation by highlighting the truth about the amazing gift that Jesus gave on the night before He died, the importance of beauty and reverence in our celebration of this great mystery, and the wonderful graces that we receive in the Eucharist to grow in our Christian lives,” he explained.

While the document will include a section focused on eucharistic coherence, the Church’s teaching on the reception of Communion, there is no plan to adopt a national policy to prohibit anyone from receiving the Eucharist, the bishop said.

It’s a statement Bishop Rhoades has repeated several times since the bishops’ virtual spring general assembly in June during which the bishops approved drafting the document. In the vote, 75% of the bishops said “yes,” while 25% said “no.”

During long discussions on the document before the vote, several bishops specifically pointed to President Joe Biden and House Speaker Nancy Pelosi, D-Calif., who are Catholic, for not actively seeking to end legal abortion and called for them to be denied Communion.

Work has begun on sections of the document that pertain to Church teaching while the section on eucharistic coherence will not be drafted until after a series of regional meetings among the bishops concludes by the end of August, Bishop Rhoades said.

As the drafting process continues, the USCCB’s actions related to the Eucharist are being watched around the world, said panelist Cardinal Joseph W. Tobin of Newark, New Jersey. “The Eucharist is on everyone’s mind,” he said. 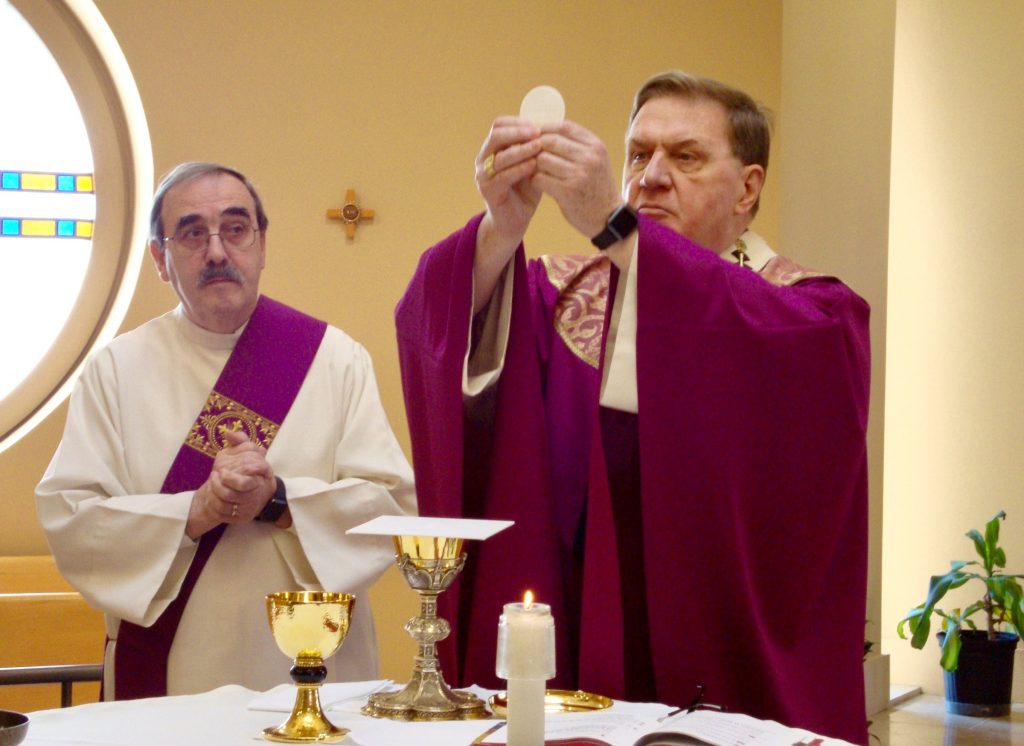 Cardinal Tobin was one of the minority of prelates who voted against drafting the document at the current time. “Having the bishops on a Zoom call is not an opportunity for discernment,” he said.

He called on the bishops to take up Pope Francis’ call to synodality to discuss and hear from many voices before reaching consensus on the issues and concerns facing the Church.

The pandemic has left people separated from the Eucharist and Cardinal Tobin suggested that the bishops reach out and welcome people back to the Church rather than restrict participation in Church life.

The debate that showcased the wide disagreements among the bishops on drafting the document should not be one that causes the bishops to fear developing a document that stresses Church teaching, explained panelist Gretchen Crowe, editorial director for periodicals at Our Sunday Visitor in Indiana.

The OSV Newsweekly published an editorial supporting the vote to draft the document. Explaining the reasoning behind the editorial, Crowe said it is vital for Catholics to better know Church teaching on the Real Presence in the Eucharist.

“In my mind, a fear of division or a fear of anything else really, never should prevent the Church from teaching what it professes about anything, much less what it teaches about the real presence (of) Jesus Christ in the Eucharist,” Crowe said.

However, Mollie Wilson O’Reilly, editor-at-large at Commonweal magazine, expressed concern that a document on the Eucharist would bolster an apparent connection the Catholic bishops have with the Republican Party.

She questioned why some bishops have been so outspoken against Biden, the nation’s second Catholic president, when they failed to be as vocal about the transgressions of former President Donald Trump’s policies that also endangered lives.

Saying she agreed that Democratic politicians should be “pushed” for their support of abortion, Wilson O’Reilly said she believed that Catholics would flee in greater numbers because the document on the Eucharist will be perceived as political rather than genuine teaching.

Panelist John Carr, co-director of the Initiative on Catholic Social Thought and Public Life at Georgetown University, which sponsored the panel, credited Bishop Rhoades for taking on a most difficult task in a time of divisiveness among the bishops and within the Church.

“It’s important to be candid about the differences here,” said Carr, who formerly was executive director of the bishops’ Department of Justice, Peace and Human Development. “How did the Eucharist, which is the sign of unity at our parish and our lives and in our Church, somehow become the thing we fight about in terms of politics? It seems to me like we’ve gotten ourselves in a terrible place.”

Carr said he disagrees with the bishops’ decision to move forward on the document.

“The pastoral dimensions are really serious,” he said. “This is terrible timing and, as people have said, in the midst of a pandemic, racial reckoning, let’s have a fight about whether the president ought to be able to receive Communion. Publicly, this showcases our divisions and is a diversion.”

The program opened with a discussion between Archbishop Christophe Pierre, papal nuncio to the United States, and Kim Daniels, co-director of the Georgetown initiative. The archbishop recapped what he told the U.S. bishops during their spring general assembly in June. 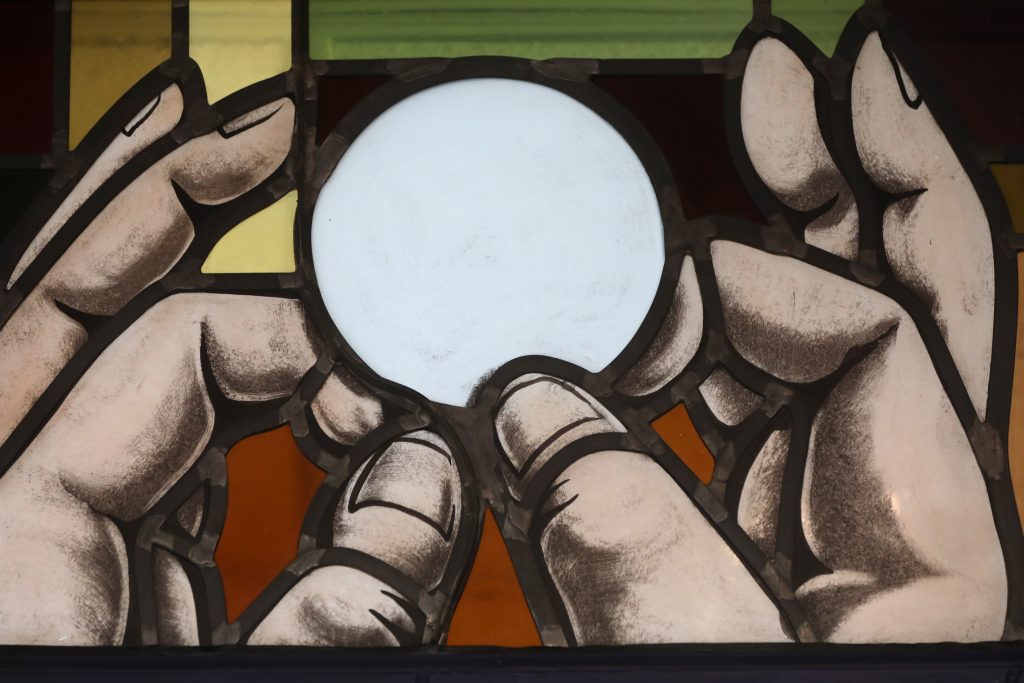 Elevation of the Eucharist is depicted in a stained-glass window at St. Anthony’s Church in North Beach, Md., July 15, 2021. (CNS photo/Bob Roller)

The diplomat said in the discussion recorded July 27 that he had stressed that any work the conference undertakes must be rooted in synodality, as Pope Francis has invited the Church to do. Synodality allows for discerning a path forward through thoughtful and respectful conversation that allows diverse voices to be heard and overcome misunderstanding, he said.

He also called on the bishops to remember that they are teachers and that the pope has invited them to teach about the sacraments “so we can receive the grace of God.” He also cautioned about the “instrumentalization” of the sacrament of the Eucharist lest it become a tool for ideologies to overtake.

“The sacraments of salvation are to be administered often to the people,” he said. “As such the Church should remain united.”

Cardinal Tobin also called for synodality to be part of the bishops’ process as the document is drafted.

“What we need is a broader consultation with the American Church on the mystery of the Eucharist, and not one, like or not, that is perceived as a political action,” Cardinal Tobin said. “We have a perfect invitation from the Holy Father to adopt a more synodal Church, people who are talking together as we walk the same road.”