WASHINGTON (CNS) — When Hannah Miller thinks of what it means to be a pro-life woman, the iconic image of the kerchief-clad Rosie the Riveter flexing her muscles immediately comes to mind.

“It’s like ‘Yes, We Can.’ Yes, we can be a mother, get a college degree and have a career,” the 23-year-old Miller, a parishioner at Ss. Phillips and James Church in Baltimore, said as she attended the National March for Life Jan. 24. “I think that those are things that women are capable of doing. What’s more empowering than that?”

This year, to mark the 100th anniversary of women’s suffrage, the organizers themed the annual march “Pro-Life Is Pro-Woman.” Organizers noted that some of the most prominent trailblazers of women’s rights such as Susan B. Anthony and Elizabeth Cady Stanton also were against abortion.

The march is held each January in Washington to commemorate the Roe v. Wade, the landmark Supreme Court ruling that legalized abortion in 1973. 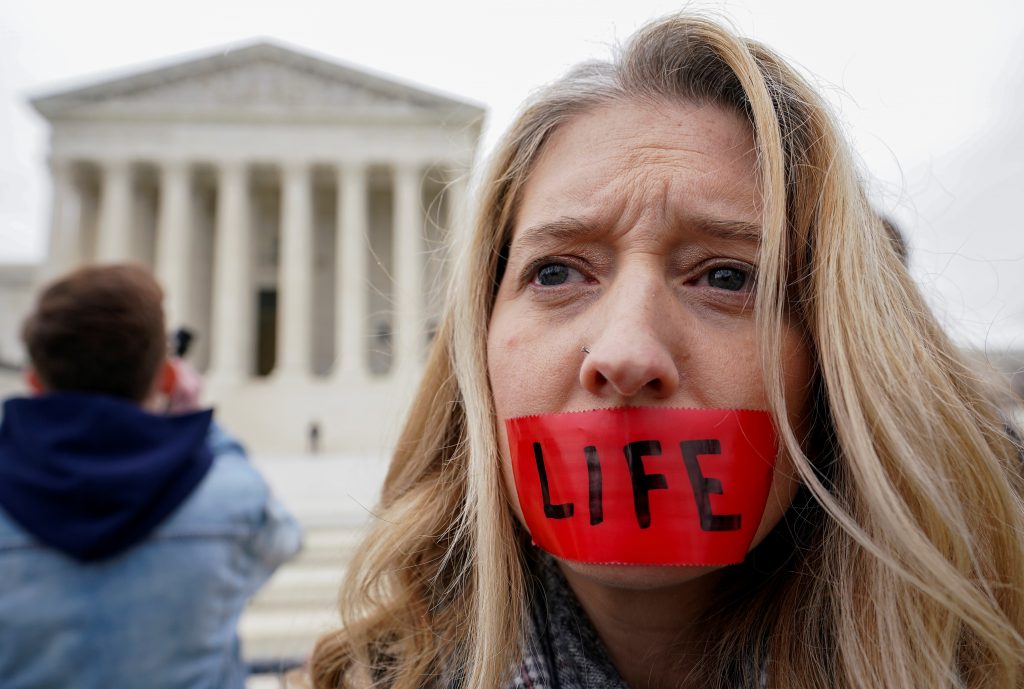 A pro-life advocate stands outside the U.S. Supreme Court during the 47th annual March for Life in Washington Jan. 24, 2020. (CNS photo/Kevin Lamarque, Reuters)

Thousands of people from across the country crowded the National Mall bearing signs that read “Life empowers women” and “#prolifefeminist.” The pro-woman message also shared space with plenty of “Make America Great Again” hats and other pro-Trump paraphernalia as President Donald Trump addressed the march in person, a presidential first.

Homemade signs have almost disappeared from the rally and march in recent years, but there were still quite a few with original slogans: “Make the Womb Safe Again,” “Abortion Is Health Care Like the Showers at Auschwitz Were Hygiene,” “Yo Mama Chose Life,” and, with a drawing of a fetus, “It’s Their Body, So Where’s Their Choice?”

Schools from across the Archdiocese of Baltimore also made the trip joining the thousands who attended the Youth Rally and Mass for Life at the Capital One Arena sponsored by the Archdiocese of Washington to kick off the march. Baltimore Archbishop William E. Lori was among the celebrants at the Mass.

This year’s theme was, in part, a response to the Women’s March after its massive crowds — at least in its initial years — had threatened to overshadow the March for Life. The women at the march said it was important to stress that women’s rights don’t have to be synonymous with supporting legal abortion.

“In my experience, pro-life sees the possibilities instead of the limitations,” said Lauren Opinion, a parishioner at St. Joseph in Cockeysville, Maryland. 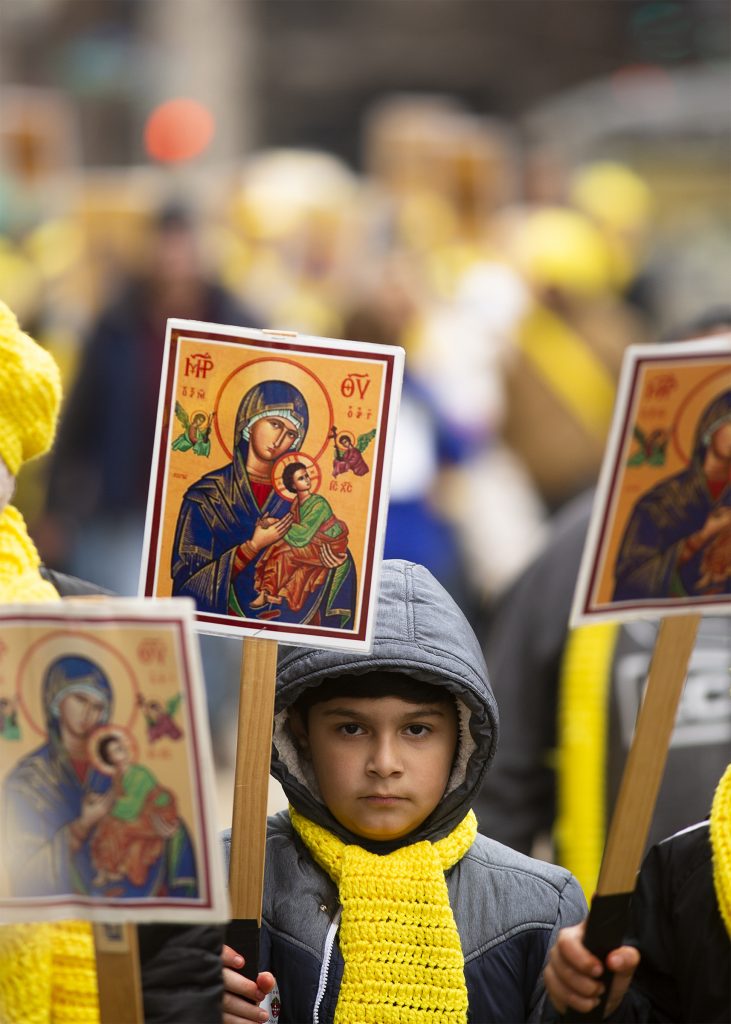 A boy marches during the annual March for Life rally in Washington Jan. 24, 2020. (CNS photo/Tyler Orsburn)

Opinion, 30, finds herself in support of many progressive women’s issues such as greater access to health care, equal pay and paid maternity leave, but she’s still reluctant to call herself a feminist.

“I always used to consider myself a feminist. It’s something I struggle with because that title usually comes with a lot of secular definitions. You have to be pro-abortion,” Opinion told the Catholic Review, the media outlet of the Baltimore archdiocese.

Amy Erardi, who works in the archdiocesan Respect Life office and led a Baltimore group to the march, noted that feminism has two definitions in the dictionary. Erardi prefers the first option: “The theory of the political, economic and social equality of the sexes” rather than “organized activity on behalf of women’s rights and interests.”

Opinion, a new mother and a speech pathologist, said the women’s rights movement should embrace equality for all women, including the unborn.

“Pro-life is pro-women because it recognizes women in the womb. It recognizes the choice of a girl in the womb and sees her potential,” Opinion said.

Erardi’s brand of feminism also has been informed by her work. She splits her time working in the medical field and helping women traumatized by their decision to have abortions.

“Until you see the consequences of abortion. You might not get it,” Erardi said.

Miller, a recent graduate of the Johns Hopkins University, said the pro-life movement is simply trying to bring the women’s rights movement back to its roots.

“I think the movement started out as a response to the disproportionate treatment of women in areas like job opportunities. It was common for women to be at a disadvantage,” Miller said. “But now the pendulum has swung too far — trying to infringe on human rights of others.”

Swift is the social media coordinator for the Catholic Review and the Archdiocese of Baltimore. The Review is the news outlet of the archdiocese. Kurt Jensen contributed to this story.