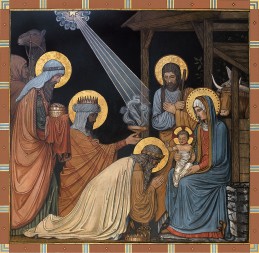 The Epiphany is depicted in a mural titled “Adoration of the Magi” in the Basilica of the Immaculate Conception at Conception Abbey in Conception, Mo. Painted by Benedictine monks in the late 1800s, the artwork is the first appearance of the German Beuronese style in a U.S. church. The feast of the Epiphany is Jan. 5.

I hope you had a very blessed Christmas and a happy New Year. We are still in the midst of the holy season of Christmas. I invite you during these days to continue to contemplate the mystery of the birth of Jesus. Even though in our culture, Christmas seems to be over on December 26th, it is not over in the life of the Christian community. The Christmas season extends through the Christmas Octave and even further until the Solemnity of the Baptism of the Lord which we will celebrate on January 12th.

This Sunday, in the midst of the Christmas season, we celebrate the Solemnity of the Epiphany of the Lord. I invite you this weekend to contemplate the event of the Epiphany, “the manifestation of Jesus as Messiah of Israel, Son of God and Savior of the world” (CCC 528) and its significance. The Son of God did not only come for the people of Israel, represented by the shepherds of Bethlehem, but also for the whole of humanity, represented by the Magi.

This past November, when I was in Germany for the beatification of Mother Maria Theresia Bonzel, I had the opportunity to visit the magnificent cathedral in Cologne, the largest Gothic church in Europe. According to tradition, the relics of the Magi were brought from Constantinople in 344 to Milan and then brought to Cologne in 1164. A shrine was constructed for the relics with beautiful gold sculptures of the Adoration of the Magi, scenes from the life of Christ, as well as prophets and apostles. The Cathedral was built to house this Shrine of the Magi. The Cologne Cathedral became a popular pilgrimage site. It was wonderful to see the Shrine, a large gilded and decorated triple sarcophagus behind the high altar of the great cathedral.

It is said that the Feast of the Epiphany is celebrated every day in Cologne because of the people’s veneration of the Magi and the influence of the Shrine and the Cathedral on the life and history of the city.

The Magi remind us of the catholicity or universality of the Church. These wise men from the East represent the peoples of the whole earth who set out in search of the new-born King of the Jews. They went to Bethlehem to adore Him. They offered Him symbolic gifts. They are forerunners of all the peoples of different races, languages, and cultures who, through the centuries, seek Jesus and meet Him in His Church.

We perhaps take for granted the universality of the Catholic Church. It is an important “mark of the Church.” We believe that God calls all people to salvation and that the Gospel is meant to be spread to the nations of the whole world. The Second Vatican Council taught that this gift of universality which adorns the People of God is a gift from the Lord Himself whereby the Catholic Church ceaselessly and efficaciously seeks for the return of all humanity and all its good under Christ the Head in the unity of His Spirit (Lumen gentium 13).

We see this universality right here in our own diocese. We are blessed with a diversity of races and cultures. I think of the beginnings of the Church in the territory of our diocese, the French and German missionaries and immigrants, the Native Americans, and the African Americans. Then the immigration of Catholics from other European countries like Ireland, Poland, Hungary, Belgium, and Italy. In more recent decades, the immigration of Catholics from Latin America, Vietnam, and Burma. Our roots remind us that the light of Christ has spread throughout the world. The universal call to salvation is meant for all peoples.

Pope Francis reminds us that “Christians have the duty to proclaim the Gospel without excluding anyone” (Evangelii Gaudium 14). As we remember the Magi, we are reminded of our duty to spread the light and joy of the Gospel. Pope Francis tells us that we are not only to be “disciples,” but “missionary disciples.” In a sense, we can say that the Church’s missionary activity had its start and its universal scope in the feast of the Epiphany.

So many people today are searching for truth and meaning in life, for goodness and love. The Magi were also searching. They followed the star. They were searching for the true light that could enlighten the path of their life. God guided them by the star. They perceived God in creation. And then, in amazement, they found God in the Child Jesus. They found the King of the universe among the poor and humble in the little town of Bethlehem.

Like the Magi, in our lives we can perceive God’s presence in creation. But it is in the Word made flesh that God definitively reveals Himself to us. Christ is the true Light that illumines our lives. Jesus said: I am the light of the world; he who follows me will not walk in darkness, but will have the light of life” (John 8:12). And it is this light that we are called to spread to others. The Church is called to offer the light of the Gospel to all people of every nation, race, and culture.

May you have a blessed Feast of the Epiphany! May the Lord bless you with spiritual joy! May we all walk in the light of Christ during this New Year!