The long days of summer approach, complete with visions of lazy days on the beach, relaxing nights around a campfire – and bored kids on car trips. Hot and humid summer days are a perfect time to encourage children to keep their minds engaged with the pastime that is completely cord-free – a good book.

Whispers of God’s presence can be found in any aspect of life and many books bespeak His existence, whether intentionally or embedded in a story’s narrative. Author C.S. Lewis once said that: “A good story which will give innocent pleasure is a good thing.” He believed that a written work did not always need to be theological in nature, but elements of a Christian writer’s beliefs would undeniably find their way into a good story, as seen in the allegories in his “Chronicles of Narnia” series.

J.R.R. Tolkien, a Catholic writer and lover of mythology, wrote his “Lord of the Rings” trilogy without the intention of making it a decidedly Catholic read. But he could not deny that his faith permeated the story, “unconsciously at first, but consciously in the revision. … the religious element is absorbed into the story and the symbolism.”

Encouraging children to read books based on faith and morals or even to see such allegories buried in a good novel can nourish the inclination to look for God in everyday life. Many of these titles can be purchased at local Catholic bookstores or special ordered through places like Good Shepherd Books and Gifts and Divine Mercy Gifts. 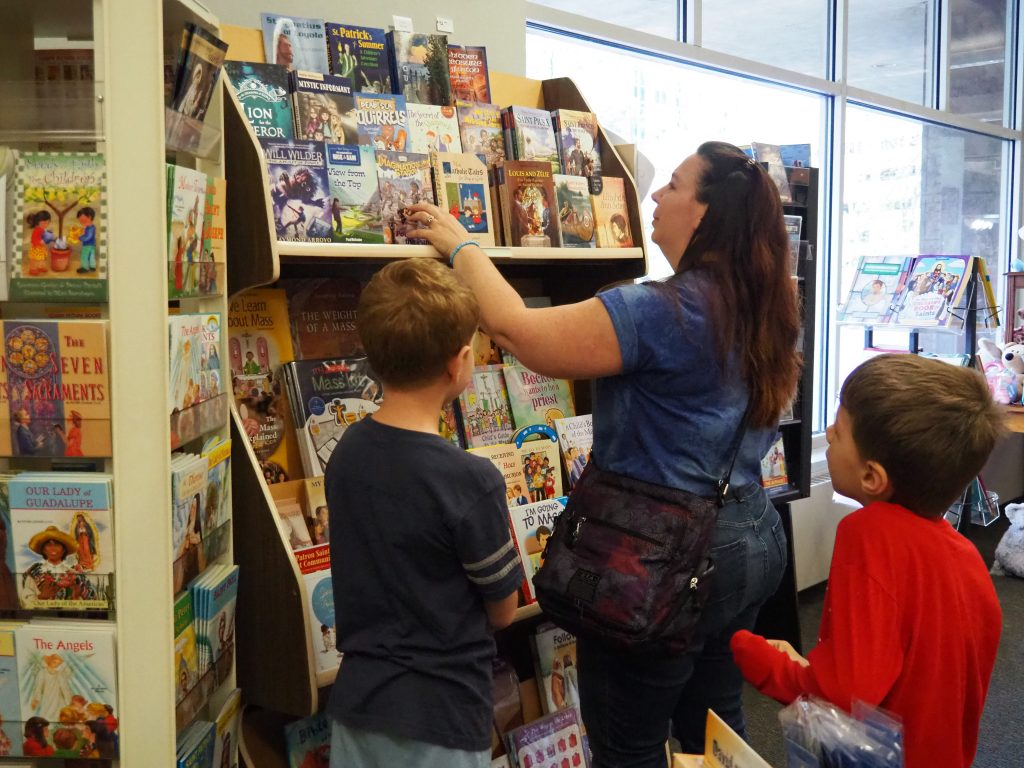 Anita Rader helps her sons Sebastian and Maximus choose books to read during the summer from Good Shepherd Books and Gifts in Fort Wayne. — Photos by Jennifer Barton

Fiction:
Grade school
“This I Know: Seeing God in the World He Made,” Clay Anderson: Based around the children’s song “Jesus loves Me,” Anderson explores how the world that God created shows His love for all mankind.

“Prince Martin” series by Brandon Hale: Follow a young prince as he undertakes adventures to protect his kingdom and learns virtues such as courage and loyalty along the way.

“Gospel Time Trekkers” series by Sister Maria Grace Dateno: Four siblings are transported back in time to the days of Jesus, following Biblical stories such as the Nativity and the Resurrection.

“The Dead Sea Squirrels” by Mike Nawrocki: At an archeological dig in the Holy Land with his father, young Michael finds two petrified squirrels that he takes home and discovers are still alive. Full of humor and moral lessons, these fun stories are appropriate for young readers ages 6-10.

Middle school
“Will Wilder” series by Raymond Arroyo: Written in the vein of “Percy Jackson,” Will Wilder is a 12-year-old who discovers “otherworldly” powers and the impact even a child can make in the world.

“The Chronicles of Narnia,” C.S. Lewis: Brimming with Christian allegory, the Narnia series originally follows the Pevensie children’s adventures in this magical land, but explores the ideas of heaven and creation, right and wrong, love and self-sacrifice.

High school
“The Lord of the Rings” by J.R.R. Tolkien: The trilogy that virtually gave birth to the fantasy genre; written by Catholic author Tolkien and chock-full of Christian imagery, flawed and noble characters and flowery prose, not to mention the excitement of a battle for the fate of the world as a group of Hobbits know it.

“The Shadow of the Bear,” “The Midnight Dancers,” “Waking Rose” by Regina Doman: Catholic writer Doman’s retelling of fairy tales with a modern take and an emphasis on morality. Note: “Rapunzel Let Down” is not recommended due to mature content.

Historical-based fiction
*There are numerous fictionalized accounts of saints and historical events appropriate for young readers; too many to list all here.

Grade school
“The Weight of a Mass” by Josephine Nobisso: Beautifully written and illustrated, this children’s story is based on a tale of a similar miracle at the butcher’s shop in Luxembourg, proving the power of a single Mass devoutly attended.

“Chime Travelers” by Lisa Hendey: Twins Patrick and Katie are swept up in time-travel adventures to aid saints such as Francis and Clare of Assisi in their God-given missions and find their way back home.

Middle school
“The King’s Prey” by Susan Peck: A fictionalized story about the life of Saint Dymphna, whose father went insane after the death of his wife and attempted to marry his own daughter. This is the story of Dymphna’s flight across Ireland from his unthinkable plans.

High school
“The Sword and the Serpent” trilogy by Marshall Taylor: Travel back to the Roman Empire, when persecution of Christians was at its height. This novelization of the life of young St. George introduces other saintly figures such as Catherine of Alexandria, Christopher and Nicholas of Myra. It is an epic adventure that spans the borders of Rome and keeps the pages turning for any reader who enjoys books in a similar vein as “Lord of the Rings.”

“Holy Mysteries! 12 Investigations into Extraordinary Cases” by Sophie de Mullenheim: For the child who is into mystery stories, this book is a wonderful introduction to unexplained phenomena within the Catholic Church, including select Marian apparitions and other wonders they may not yet know about. Arranged with short text boxes and actual photographs, it is meant to be engaging for young readers.

High School
“The Shadow of his Wings” by Gereron Goldman: The true story of a young German seminarian who managed to stay the course of his priestly training, even while drafted into Hitler’s SS during World War II. The graphic novel of this book could be appropriate for middle school students.

Social/Family/Relationships
Middle School into High School
“A Single Bead” by Stephanie Engelman and “Agnes’ Gift” by Kristelle Angelli: Both of these stories focus on loss, relationships and the journey two young women make in deepening their Catholic faith through the power of the rosary and the devotions of the lost loved ones.