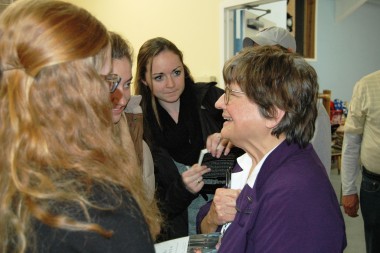 Students from the University of Notre Dame talk with Sister Helen Prejean about what they’ve learned about the death penalty.

SOUTH BEND — Sister Helen Prejean smiled warmly as she scanned the crowded dining room at South Bend’s Our Lady of the Road Catholic Worker Drop-in Center. On Tuesday of Holy Week, students, mostly from Notre Dame, sat on the floor on blankets, relinquishing the center’s chairs to older knees and backs.

Sister Prejean, a Sister of St. Joseph, nationally recognized advocate for abolishing the death penalty and the author of the bestselling book, “Dead Man Walking,” seemed particularly happy to see dozens of young people seated around her podium. Several student leaders had told the group they were studying the death penalty and circulating petitions to end it.

Sister Prejean remarked that she had been speaking out for the abolition of capital punishment for almost 30 years. But, she said, she always begins with her own story and how she “woke up” to what the Gospel really means.

Sister Prejean was born and raised in Baton Rouge “in privilege.” The daughter of a lawyer, she attended private, Catholic schools. While growing up, she said, she had no contact with those in need, particularly with African-Americans. “It was Jim Crow days. Even Catholic churches were racially separated,” she said, “but I never questioned it.” In fact, she added, “For a long time, I didn’t even understand that the Gospel of Jesus was also about justice and mercy. I thought it was just about being charitable, being nice to everyone.”

When she began to serve in the all-Black St. Thomas Housing project in New Orleans, she began to see that many people were being denied charity and justice. She began to “wake up” to the Church’s call for a “preferential option for the poor” and what it meant. 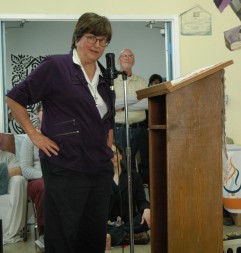 Sister Helen Prejean makes a point during her talk about the death penalty
at Our Lady of the Road Catholic Worker Drop-in Center in South Bend.

In 1981, Sister Prejean began to write to a death row inmate at the Louisiana state prison. A second sort of awakening was about to begin, she said. She had learned that those in prison were typically poor and people of color. Sister Prejean’s two-year friendship with Patrick Sonnier began. Sonnier was awaiting the death sentence for the murder of 18-year-old Loretta Bourque and her boyfriend, 17-year-old David LeBlanc. Sonnier, a Catholic, soon asked Sister Prejean to be his spiritual advisor. Though she didn’t realize it then, this role status would officially allow her to attend Sonnier’s execution.

As Sister Prejean got to know Sonnier, she avoided reaching out to the families of his victims who were also Catholics. “That was a mistake,” she said bluntly. “I felt guilty because they were in such great pain. But, I wrongly believed that I had to be on one ‘side’ or the other. I didn’t think I could advocate for Patrick Sonnier and minister to the families of his victims.”

When she met Lloyd LeBlanc, her awakening continued. LeBlanc, the father of the murdered boy, had undergone a conversion. Originally, he was filled with anger and desire for revenge. He’d dreamed of pulling the switch for “twin electric chairs” — one for Patrick and one for his brother and accomplice, Eddie Sonnier.

But, LeBlanc soon saw what hatred was doing to his life and peace. “They killed my son but I’m not going to kill them,” he finally told himself and later told Sister Prejean. “Jesus is where life is. I found life going down the road of forgiveness.” Sister Prejean was deeply touched by the man’s Christ-like compassion and love. “He’s really the hero of my book, ‘Dead Man Walking,’” she said.

Meanwhile, Sonnier urged his spiritual advisor and friend not to attend his execution. He feared that it would scar her emotionally. But, as Sister Prejean explained, she told Sonnier that he should have “one face there who would represent the face of Jesus and love.” On April 5, 1984, she chose to accompany Patrick Sonnier, a “dead man walking,” who looked into her face before the leather mask was put on.

“I came out of the electric chair chamber that night, and there were sisters waiting for me. It was cold, and it was about 1 a.m. in the morning. I just threw up. It was so horrible. But, it was all legal. The Supreme Court had said it was okay. From that moment on, I felt called to tell Americans about this.” Executions are done in our name, in the name of the citizens of the state, she said. Many don’t understand what’s being done because it’s hidden.

In 1993, Sister Prejean wrote “Dead Man Walking: An Eyewitness Account of the Death Penalty in the United States.” A year later, actress Susan Sarandon, who had read the book, contacted her in hopes of making it into a film.

Today, Sister Prejean said that she is encouraged to see more people rejecting capital punishment. State-sanctioned executions, she said, represent violence — killing — done in the name of the people of a state. Referring to frequent calls for mercy from Pope Francis, she added that the families of victims are now frequently asking for mercy for those who have killed their loved ones.

Sister Prejean’s talk was part of a yearlong series about the death penalty sponsored by the St. Peter Claver Catholic Worker community of South Bend. It was also sponsored by the Michiana Coalition to Abolish the Death Penalty and the University of Notre Dame’s Center for Social Concerns.