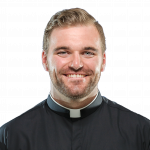 Like too many people in a post-fall world, I am someone with a deep father wound that, despite the immense love I have been surrounded with throughout my life, results in me living most days out of a lie. This lie takes on different forms and consequences: It sounds something like “I am not …” “I am just …” “I’ll never …” and worst of all, “I am not lovable.”

When I step outside of myself and remove myself from those interior feelings, I recognize how little sense they make. But like all attacks from the enemy, there is no sense to be had because the devil is the father of lies and confusion.

The months leading up to January of 2019 were flat-out difficult. Prior to leaving for World Youth Day in Panama, I was in a low place, struggling with prayer, belief in my own goodness, my vocation and hoping in my salvation. I boarded the plane with the hope of experiencing some vocational clarity, but little expectation of this actually occurring.

On Wednesday our group spent the afternoon and evening at the Fiat Festival organized by the U.S. bishops, Fellowship of Catholic University Students and Knights of Columbus for English-speaking pilgrims. During this event, myself and two fellow seminarians went to the back of the expo hall to pray Evening Prayer. As we were about to begin, our bishop walked up and asked if he could join us. It was so ordinary, yet so remarkable. As we finished praying, I walked back to my seat and remarked to one of the other guys, “Wow. That was really cool. It was just like our dad asking to spend time in prayer with us.” It was both an odd experience and statement for me, because prayer was not something I experienced with my biological father.

Later that day, a group of us ended up wandering around a market and eating dinner with our bishop. This was a rare opportunity to spend quality time with the person who God has ordained to be my spiritual Father. The person of the bishop is the one whose role as successor to the Apostles does not just guarantee valid sacraments but sustains the love of the Father made known through Jesus Christ in the Church for all of time. In this moment, God the Father had lavished His love on me through the bishop. On the surface this was not a grand experience of prayer, but don’t most fathers love in ordinary ways every day?

Saturday night, after a long and stressful journey to join hundreds of thousands of other pilgrims at Campo San Juan Pablo II for the prayer vigil with Pope Francis, myself and another seminarian journeyed off to find a priest for confession. “I’m going to go find a priest who I will never see again to hear my confession,” I told the other seminarian. Even in this simple statement I was speaking out of the lie that “I am not lovable.”

After a while we met Father Dan, who happily agreed to hear our confessions. I gave my sins to Jesus Christ, and acting in the person of Christ this priest raised his hands over me and began to pray the prayer of absolution. As this was happening Pope Francis stood up on stage and I was looking directly at Peter as the mercy of the Father first poured out on the cross was pouring over me and purifying my soul. As St. Peter’s successor, the Holy Father leads the Church on earth all because the Father knew man needed the sacraments found in the Church and wanted to leave us a safe vessel back to Him all for the sake of love. I returned to my seat, but the Father was not done.

Later, as I was walking around I ran into Father Dan again. He asked, “Could I come into your guys’ section and hang out for a little bit?” He talked with us and eventually knelt down next to me in adoration of Jesus in the Eucharist for an hour. A priest, seminarians and pilgrims at World Youth Day kneeling in adoration of Jesus: Pretty expected, maybe. Yet, it hit me: God the Father had attacked the lie I had been living in this simple gesture. I thought this priest would only look at me and see my sins, yet here he was spending time with me worshipping our God together. The Father was showing me that even as sinners He desires to be with us. Our time with the Father does not have to be some emotional mountaintop experience but can occur in the most ordinary of exercises.

Having reflected on these experiences and many others throughout the week, I returned to the hotel. It was our last night in Panama and the pilgrimage had come to an end. Following dinner another seminarian and I had plans to pray with two religious sisters. At 10 p.m. on the floor of a hot banquet room in the hotel, I found myself surrounded in prayer by them and three lay people from the sisters’ community. They prayed over me, calling on the Holy Spirit, and others joined the group. As the others who I barely knew laid hands on me, the Holy Spirit spoke through them. The man in the group who I knew the least began to speak directly to me about the love of the Father for me and attacking the lies that I live out of. He even quoted the very Scripture that I had prayed with just hours before, in private. The Father was speaking directly to me. I lack the words to adequately express the truths that were spoken to me, the feeling of love that swelled up in my heart and the gratitude that I have for them but above all the Father, who had arranged my entire pilgrimage for this moment.

There are many lessons in this experience. First, we need the Holy Spirit. We cannot ignore Him! Just as God sent Jesus Christ on that first Christmas to reveal His great love for us, He sent the Holy Spirit down at Pentecost to continually strengthen us and draw us back to Himself. We must not neglect this great gift.

Secondly, we need each other. We cannot be afraid to pray for and with one another. One of the most important moments of my pilgrimage occurred because I was open to an invitation to pray with others and accepted the reality that I cannot do this alone and that I am not alone.

Finally, the Father is one who never stops loving: He will reveal His love to us in whatever way possible, even when you are exhausted and sweating like never before on the floor of a hotel in Panama.

In his homily at the official opening Mass of World Youth Day, Archbishop José Domingo said: “This meeting of you young people with Jesus Christ should lead you to confrontation with yourselves.” In Panama I confronted myself not with eyes infected with the cataracts of lies placed there by Satan, but the eyes of the Father, who looks at me and says, “You are good.”