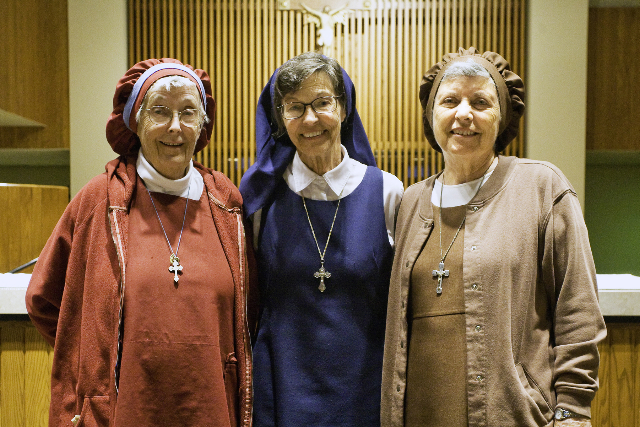 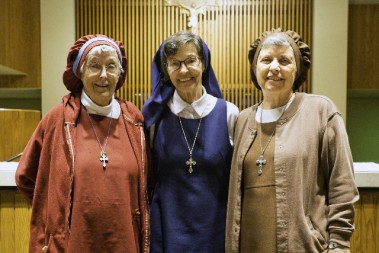 From left are Sister Jane Brackebush, Sister Mary Ann Burkhart and Sister Nancy Frentz, the three canonical hermits of the Diocese of Fort Wayne-South Bend. The July 8 photo was taken following the Mass celebrated by Bishop Kevin C. Rhoades at St. Charles Borromeo Church in Fort Wayne in which Sister Burkhart professed her first vows as a hermit.

FORT WAYNE — As the Church celebrates the Year of Consecrated Life as declared by Pope Francis, its faithful gives thanks for those who live out their religious vocation in service to the Lord and His people. Most are familiar with the vocations of religious brothers, sisters and priests, most of whom live in religious communities. But here in the Diocese of Fort Wayne-South Bend, three women have chosen a unique vocation that begs solitude rather than community — the life of a hermit.

Sister Nancy Frentz, who has been a canonical hermit for two years, Sister Jane Brackebush, who recently observed her first anniversary of consecrated life as a hermit, and Sister Mary Ann Burkhart, the newest member of the eremitical life, having professed first vows at a Mass celebrated by Bishop Kevin C. Rhoades at St. Charles Borromeo Parish in Fort Wayne on July 8, have chosen the life of solitude and silence.

In his homily at the Mass on July 8 Bishop Rhoades instructed the congregation, “The lives of hermits were marked by solitude and prayer. The Second Vatican Council acknowledged and affirmed this ancient form of consecrated life and it is described in the 1983 Code of Canon Law in this way: ‘In addition to the institutes of consecrated life, the Church recognizes the eremitic or anchoritic life by which the Christian faithful devote their life to the praise of God and the salvation of the world through a stricter withdrawal from the world, the silence of solitude and assiduous prayer and penance.’” The code also says that “a hermit is recognized by law as one dedicated to God in consecrated life if he or she publicly professes in the hands of the diocesan bishop the three evangelical counsels, confirmed by vow or other sacred bond, and observes a proper program of living under his direction.”

All three women had once lived out the vocation of marriage in their lives. Two of the women have children and grandchildren. Later in life, as responsibilities shifted, each sought to live their calling to religious life and joined a religious congregation. Eventually, each sister discerned a call to the eremitical life and contacted Bishop Rhoades for his approval. They each professed first or temporary vows with Bishop Rhoades and have three years from their first profession to discern the vocation before professing permanent vows. The bishop serves as their superior.

Each hermit has a rule of life approved by the bishop. Sister Frentz lives in her own home, which she shares with Sister Brackebush. They each contribute through their retirement funds to the upkeep of the home. Sister Burkhart lives in her own home and supports herself through retirement funds as well. They live separately and sparingly, and have no televisions in their homes. Each sister wears a habit, though it is not required. It is, they say, a witness to their faith.

Their days consist of daily Mass, Eucharistic Adoration, recitation of the rosary, praying the Liturgy of the Hours, and much more. Though they have been set apart from the community and required to refuse participation in social gatherings, they can speak to others while attending Mass and their family members, and go out for groceries and the like. Loneliness is a non-issue, they say, because they reside in the presence of God. The hermits report that though they spend the bulk of their days in prayer, none adhere to any specific time schedule.

Father Mark Gurtner, pastor of Our Lady of Good Hope Parish in Fort Wayne and judicial vicar, notes that prayer is the spiritual engine of the diocese. “A life of prayer helps bring spiritual blessings on the diocese,” he says, adding that the life of a hermit is a witness to all to live as Christ did. “Their service,” he says, “is prayer and witness.”

As each professes a calling to this unique way of life that affords them the solitude to draw ever closer to God and His people through prayer and penance, Sister Burkhart says, “The goal is to do God’s will always. Poverty, chastity and obedience helps.”

• Hermits “devote their life to the praise of God and salvation of the world through a stricter separation from the world, the silence of solitude and assiduous prayer and penance.”

• There has been an increase in the hermitic life due to the 1984 promulgation of Canon 603, which allowed bishops to accept within their own dioceses hermits who were not affiliated with religious orders.

• Canon law allows men and women in later life the opportunity to discern whether they have a call to the hermitic life.

• A hermit professes temporary vows of poverty, chastity and obedience, and has three years of discernment before the profession of permanent vows.

• The diocesan bishop is a canonical hermit’s superior.

• A canonical hermit lives by the specific rule of life discerned with his or her bishop.

• A hermit has a specific apostolate.

• A hermit supports him or herself financially.

• Though hermits are set apart from the community they can still talk with people.