WASHINGTON (CNS) — Even as the government of El Salvador announced a nationwide quarantine, hundreds flocked to a pilgrimage site March 12 to remember a Jesuit priest and his companions killed 43 years ago and declared martyrs by Pope Francis in February.

A Mass for Salvadoran Jesuit Father Rutilio Grande at the site where he was martyred along with two parishioners March 12, 1977, near his hometown of El Paisnal, was canceled after the government prohibited gatherings of more than 250 as a precaution to prevent coronavirus from spreading. Instead, the Archdiocese of San Salvador asked parishes to celebrate “our martyrs” in their respective localities. 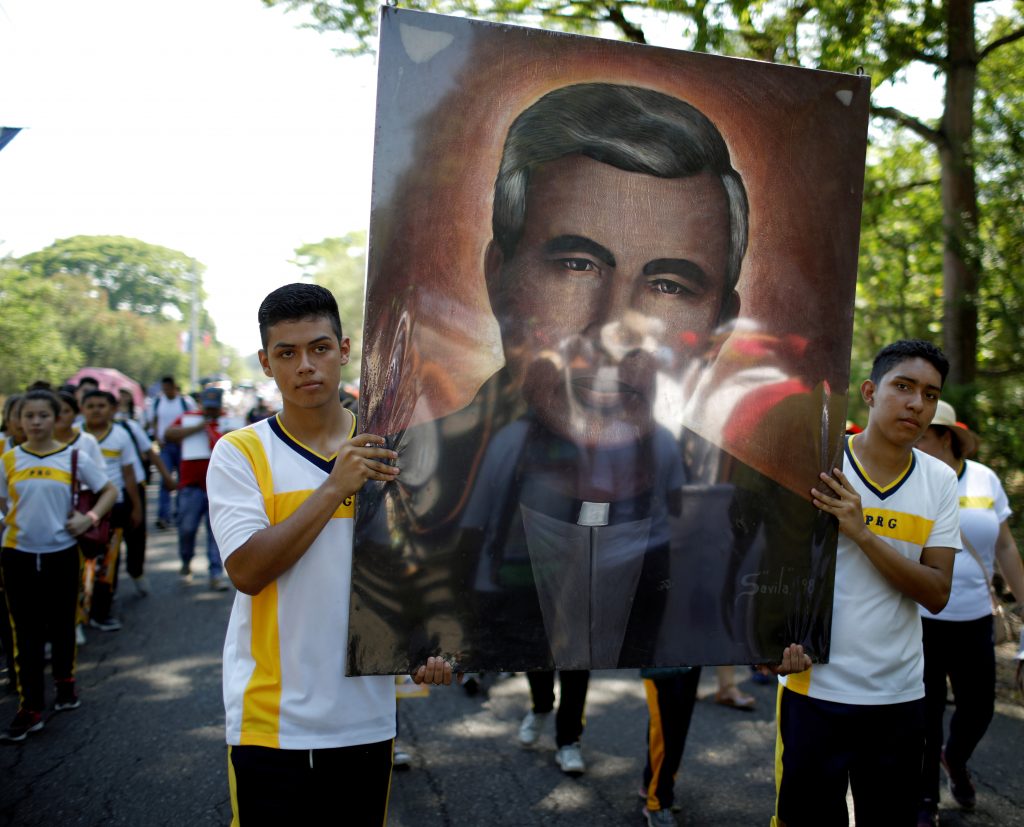 Catholic school students participate in the commemoration of the 1977 murder of Jesuit Father Rutilio Grande in El Paisnal, El Salvador, March 12, 2019. March 12 marks the 43rd anniversary of when Father Grande was killed while on his way to a novena. (CNS photo/Jose Cabezas, Reuters)

The three were murdered en route to a novena to celebrate the feast of St. Joseph, though the main target was Father Grande, killed because he helped the poor.

In his efforts to teach the poor to read using the Bible, Father Grande also organized them so they could speak against a rich and powerful minority: the coffee farmers and landowners, who oppressed them.

On March 12, the Salvadoran Catholic TV station Television Catolica showed hundreds headed to the church where Father Grande is buried, along with elderly parishioner Manuel Solorzano and teenager Nelson Rutilio Lemus, who died with him.

The Vatican announced Feb. 22 that Pope Francis has recognized their martyrdom. Papal recognition of their martyrdom clears the way for their beatification, although the Vatican has not announced a date or place for the ceremony.

Archbishop Jose Luis Escobar Alas of the Archdiocese of San Salvador began the day celebrating a Mass for the three in a chapel at the archdiocese. In a statement late March 11, he said that because of government regulations, groups of 100-150 at a time would be allowed into the church where the three are buried, for those who wanted to pay their respects on what some of them have long-considered a type of feast day.

For years, the crowds of those making the March 12 pilgrimage to El Paisnal have grown. The municipality is close to where Father Grande and a group of Jesuits and other lay missionaries worked with farmworkers in the 1970s.

Lauding Father Grande, the archbishop said the Jesuit offered his life and gave it freely, defending the poor because “in them, he found Christ.”

“God has rewarded him because the name of his executioners isn’t known. They’re hidden,” he said. “Instead, the name of our martyrs is exalted, and they have been rewarded … they are taking part in the eternal banquet because God is just.” He characterized their assassination as a “crime against humanity,” but one of thousands suffered by many other Salvadorans killed during the country’s civil conflict that raged in the 1980s.

“Blessed is our homeland that was received the blood of our martyrs,” he said, adding that only God can make something good out of something bad.

In a time in which many live in fear of coronavirus, Archbishop Escobar told those gathered for Mass to pray for the intercession of the martyrs, for their protection because they were offered as examples of how Christians should live but also to intercede for others in heaven.

“We invoke them knowing they are with us,” he said.

El Salvador does not have any confirmed cases of the disease COVID-19, but the Salvadoran government announced late March 11 that it would not allow foreign nationals — with the exception of diplomats and residents — to enter for 21 days as a measure of preventing the virus from spreading among its population.