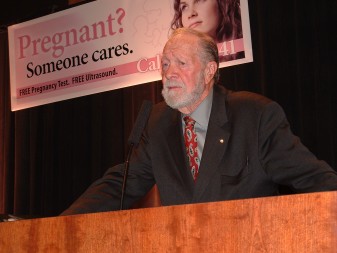 SOUTH BEND — As a young boy of six, Joe Scheidler was deeply impressed with an image of an angel with a spear he saw at Sacred Heart Church at Notre Dame and a picture of St. George slaying the dragon he saw at his uncle’s house.

He asked his aunt what these figures were doing, and she replied that they were fighting Satan.

“Wow!” the youth exclaimed, “This is the Church to belong to!” Scheidler commented, “That’s exactly what we are. We are the Church militant, not the Church milling around worrying about what’s happening.”

Scheidler was the keynote speaker at the 20th annual Saint Joseph County Right to Life dinner Oct. 6, in South Bend. He would grow up to be one of the most effective soldiers in the battle against abortion.

Scheidler founded the Pro-Life Action League in 1980. His pro-life activities were so effective that the National Organization of Women and two abortion clinics sued him in 1986, using anti-racketeering RICO law against him. Originally found not guilty, he was subsequently found guilty in the ensuing legal battles until he was finally found innocent by the U.S. Supreme Court in 2006.

Scheidler joked that he is a “racketeer emeritus” and proud of it. Quoting Hamlet, he said “time is out of joint,” and that society is sick.

Scheidler’s perspective is that we are fortunate to be born in a time of crisis because we know exactly what we have to do.

The veteran pro-lifer encouraged his listeners to continue to persevere and to strengthen their faith. He encouraged the attendees to do something every day for the pro-life cause, not just show up for a yearly march.

Scheidler said there is a price to pay for pro-life activism.

“We’ve saved thousands of lives,” he continued. Abortionists and clinic workers have been converted.

Scheidler said that showing the public pictures of aborted babies plays an important role in ending abortion. He pointed out that it was only after actual photos of child labor were published that child labor laws were passed. The slave trade was ended in Great Britain when people saw pictures of slaves in chains packed into galleys.

Honorary dinner chairman Mark Jamrog put the abortion crisis in focus with some statistics. Since 1973, approximately 58,600,000 American babies have been killed. Notre Dame stadium holds 80,795 people. The stadium would have to be filled and emptied every day for almost two years before the number of abortion victims would be equaled. The figure for Saint Joseph County is between 35,000 and 41,000 deaths, about 40 percent of the population of South Bend, or one-half of Notre Dame stadium.

Jamrog appealed for prayer, financial support and volunteer work to support Saint Joseph County Right to Life. A major goal of the fund-raiser dinner is to pay for two pro-life billboards on either side of the approach to the South Bend abortion business that cost $30,000 annually.

The organization’s president, Tom Gill, said that “since you got up this morning,” 58,000 babies have been killed by abortion worldwide, 115,000 every full day and 42,000,000 every year. “There is a real danger that we become desensitized. We need to get people to come back to this issue,” Gill said.

He lamented that attendance at pro-life demonstrations has fallen off considerably in recent years. He asked everyone there to commit to come to the October Life Chain event and the South Bend federal courthouse march in January. He underscored that numbers are important and that people need to stay engaged in the battle.

Virginia Black was posthumously honored with the Annette M. Macknick Courage Award. Ray and Anne Black were presented with the Pillar of Life Award. The Brother John Lavelle, CSC, Scholarship was awarded to Corrie Ann Belobraydich, president of Bethel College Students for Life.

Scheidler concluded his talk with a quote from Shakespeare’s Henry V. The scene is the morning of the Battle of Agincourt in 1415. The king addresses his relatively small force of warriors about to face off with a better equipped French army about five times their size. Speaking of the battle soon to take place he said:

But we in it shall be remembered —

We few, we happy few, we band of brothers;

For he today that sheds his blood with me

Shall be my brother … And gentlemen in England now-a-bed

Shall think themselves accurs’d they were not here,

And hold their manhoods cheap whiles any speaks

That fought with us upon St. Crispin’s day …