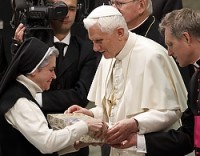 A nun presents a gift to Pope Benedict XVI during his general audience in Paul VI hall at the Vatican Jan. 19. (CNS photo/Paul Haring)

VATICAN CITY (CNS) — The search for Christian unity has not been easy, but it already has drawn Christians closer to one another and made Christianity more attractive to those who do not believe, Pope Benedict XVI said.

A sense of brotherhood among Christians “is the most tangible sign of unity, especially for those outside” the Christian community, the pope said Jan. 19 during his weekly general audience.

As he does each year at his audience during the Week of Prayer for Christian Unity, Pope Benedict dedicated his talk to explaining the theme chosen by the Vatican and the World Council of Churches for the week.

The theme for 2011 was: “One in the Apostles’ teaching, fellowship, breaking of bread and prayer.”

Pope Benedict said the theme, drawn from the Acts of the Apostles, contains the four characteristics that made the early church community in Jerusalem “a place of unity and love.”

The first, essential characteristic, he said, is that Christians remain faithful to the Gospel and the teaching of the Apostles, which is the foundation of Christian faith.

Second, he said, there is fellowship and fraternity, the experience of each person sharing and caring for one another.

“The history of the ecumenical movement is marked by difficulties and uncertainties, but it also is a story of brotherhood and cooperation, of spiritual and human sharing, which has significantly changed relations between believers in the Lord Jesus. All of us are committed to continuing on this path.”

The pope told the estimated 2,500 people at his audience, “Communion with God creates communion among us and must necessarily be expressed in concrete communion” and sharing with one another. “No one in the community should be hungry, should be poor. This is a basic obligation,” he said.

The third element is participating together in “the breaking of the bread,” in which Christ makes himself present, the pope said. Sharing the Eucharist is the sign of fully sharing faith, which is why the Catholic Church insists that divided Christians cannot normally share Communion, he said.

Especially during the week of prayer, he said, Christians should feel “regret for the impossibility” of sharing the Eucharist.

The fourth characteristic of a united community is a constant tendency toward prayer, he said. In prayer, people recognize themselves as children of God and, therefore, brothers and sisters to one another, the pope said.

Editor’s Note: The text of the pope’s audience remarks in English will be posted online at: www.vatican.va/holy_father/benedict_xvi/audiences/2011/documents/hf_ben-xvi_aud_20110119_en.html.

The text of the pope’s audience remarks in Spanish will be posted online at: www.vatican.va/holy_father/benedict_xvi/audiences/2011/documents/hf_ben-xvi_aud_20110119_sp.html.