Among Catholics in other parts of the world are numerous Easter traditions that local Catholics might consider incorporating into their own Easter celebration. The Diocese of Fort Wayne-South Bend is made up of people from many of those different countries and ethnic backgrounds, who celebrate Easter in fascinating and unique ways. While some of these traditions may have been forgotten over the course of generations, families may find this period of social isolation and spiritual waiting the ideal time to recapture some of these and incorporate them into their in-home Easter celebrations. 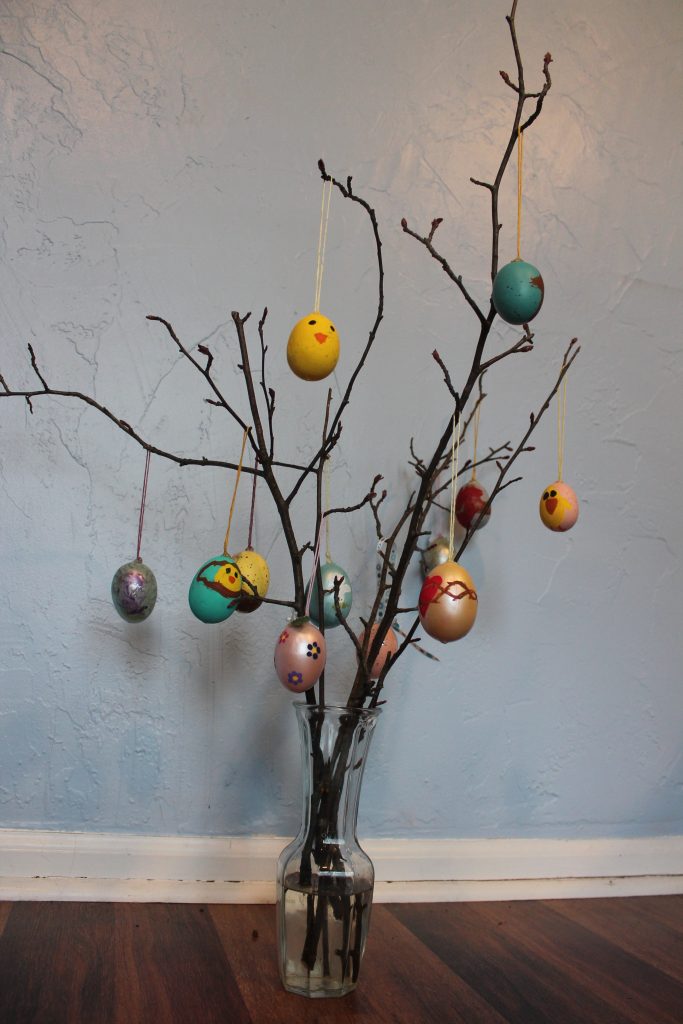 Jennifer Barton
In the German culture, an Easter tree can be an actual tree adorned with colorful eggs, or branches, preferably in bloom, trimmed and brought inside to brighten the home.

The Fort Wayne area has a large German-descended population, and Easter traditions in Germany are deeply rooted.

Eggs get a unique twist in Catholic areas of Germany, where Osterbaum — or Easter trees — are very popular. Whether using an actual tree or branches cut from a tree and brought inside, these trees are decorated with painted Easter eggs. A similar tradition is the Osterkranz, or Easter wreath, which is decorated with colorful eggs and hung from the ceiling.

Germany is also the originator of the Easter Bunny. But the event of greatest interest in Germany happens once every 10 years, held this year, is the Easter Passion Play in Oberammergau. It began close to 400 years ago in 1633 when villagers promised to continue it if God would spare the village from the plague. Plague-related deaths ceased.

At home, cut fresh branches from a tree or bush and place in a vase inside the house. Eggs may be in short supply during Easter this year, so rather than dyeing eggs, a little ingenuity can create “eggless” ones made from materials found around the house such as yarn, paper or decorated plastic eggs to tie from the branches.

In Spain, Easter celebrations begin before the actual holiday with what is called “Semana Santa,” Spanish for Holy Week, with great pageantry. Parades that date back hundreds of years take place on Palm Sunday and throughout the week as Catholics build floats covered in flowers, candles and most importantly, an elaborate statue of either Jesus or the Virgin Mary. The floats are carried on the backs of dozens of men and paraded around particular cities in Spain. Part of these processions are the inclusion of hundreds of people dressed in robes, often white or black, with tall pointed hats and carrying large, lighted candles. These hooded costumes are hundreds of years old and represent penitence. The penitents’ faces are covered to show mourning due to the shame of sin.

Though Semana Santa processions in Spain have been canceled, most Catholic homes have statues or pictures of Jesus and Mary that could be decorated with flowers and other symbols to commemorate this celebration of Holy Week.

Similar to Spain, Italy holds solemn processions on Good Friday or Holy Saturday with costumed participants carrying statues of Jesus and Mary through the town. Some towns also stage Passion plays or Stations of the Cross on Good Friday. Italian Easter bread is braided with three strands to represent the Holy Trinity and shaped in a crown like the crown of thorns with colored eggs baked into the bread. Some areas of Italy bake their bread in the shape of a dove to symbolize hope.

With plenty of time in the home, families can experiment with baking bread for Easter. Various recipes for braided Easter bread, both with and without eggs baked into it, are available online.

Many of the traditions that originated in Spain were carried to their colonies in Central America and South America hundreds of years ago. Processions on Palm Sunday are traditional in some cities in Mexico, commemorating Jesus’s triumphal entry into Jerusalem. The town of Iztapalapa holds one of the largest Passion plays, known as the Via Crucis.

If children are mature enough, families can watch the crucifixion scene from the 1977 miniseries “Jesus of Nazareth” on YouTube together or pray a virtual Stations of the Cross. 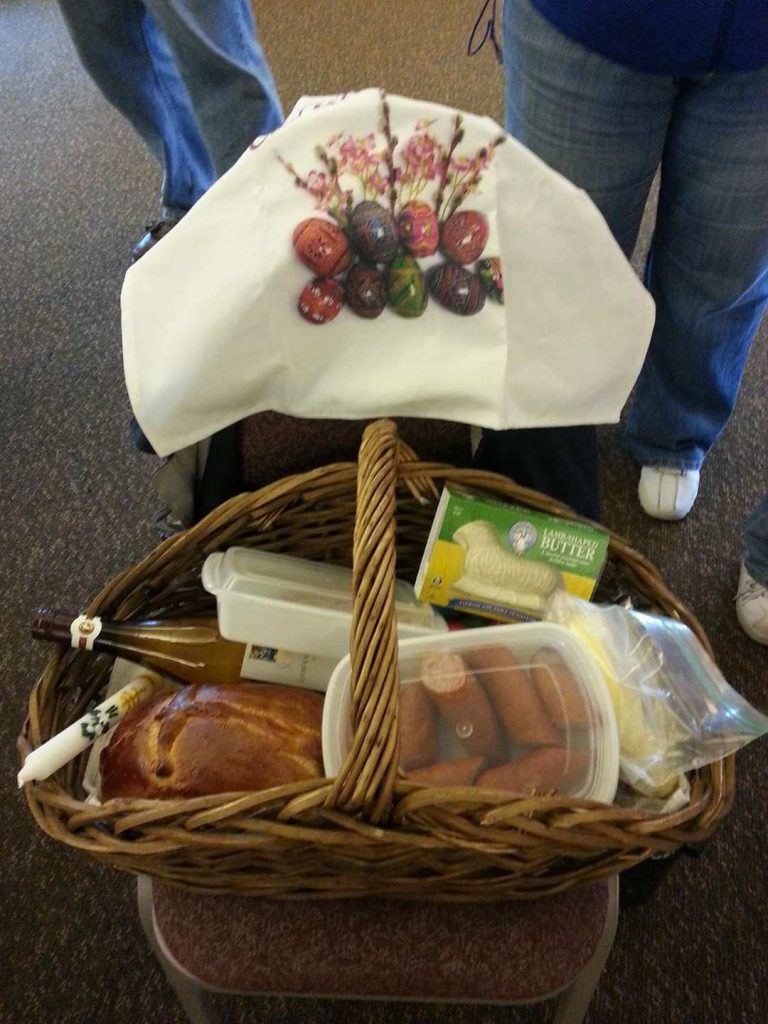 Provided by Kathy Fech
Example of a traditional Slovakian Easter basket to be blessed at Mass. The baskets usually contain food items such as sausage, lamb-shaped butter, eggs and an Easter candle meant to be lit during Mass.

In the South Bend area, there are many churches founded by people from Poland and other Eastern European countries. In places like Poland, Slovakia and Hungary, the tradition of placing a basket filled with certain foods at the altar of the church to be blessed is popular and has transitioned to the United States with these immigrants. Each food item has meaning in Christianity. Some popular items are butter, generally in the shape of a lamb, which symbolizes Christ’s goodness; meat in whatever chosen variety as a symbol of God’s generosity; and, interestingly, horseradish mixed with grated beets represents Christ’s passion and bloodshed. These baskets are typically covered with an elaborate cloth to resemble Christ’s burial shroud. And, of course, eggs are part of Easter tradition as a sign of new life, painted most elaborately in some Eastern European countries like Romania.

At home, an Easter basket can still be put together by a family, with items chosen for their symbolic natures — even if there is no Mass at which to bless the basket.

Ireland holds rather low-key celebrations for Easter. Good Friday is a solemn day in which eggs are collected, but not eaten. Bread is marked with a cross when it is baked on Good Friday, similar to hot cross buns in England. Catholics attend Mass on Easter Sunday, usually wearing new clothes, then return to their homes for a large meal. Homes are also prepared in advance for a priest to come and bless them on Easter Sunday.

At home, Irish soda bread can be baked on Good Friday with a cross cut into the top of the bread before baking.

Where in Germany the Easter Bunny is the one who delivers the eggs, in France eggs are dropped by the flying bells of churches as they wing their way “back” from Rome on Easter morning. The bells in French churches are silenced on Holy Thursday and are said to “fly” to Rome to be blessed by the pope before ringing out the Resurrection on Easter Sunday. The eggs that the bells supposedly scatter in gardens along their flight path become part of the children’s traditional Easter egg hunt. And in one town in France, Bessieres, it has been a part of their Easter tradition for the past 40 years to create the world’s largest omelet using around 15,000 eggs to feed the town.

At home, the ringing of the bells of St. Peter’s Basilica in Rome can be played through YouTube videos or families can ring bells through their own homes, after which Easter egg hunts can take place inside or outside the house.

Food, of course, is central to most celebrations, and Easter is no exception. While every nation and family have their own traditions in terms of the Easter feast, some foods have become almost universal in their affiliation with Easter. Eggs, of course, represent new life. Lamb as a traditional dish is a nod to Catholicism’s Jewish roots and the Pascal Lamb. Bread is also a staple in some form in nearly every country, as Jesus called Himself the Bread of Life in the Gospel of John.