After the somber 40 days of Lent with little or no ornamentation in churches, the profusion of flowers that burst forth at Easter Masses can lift the spirits of worshippers and serve as a reminder that through Christ there is life after death, just as the dreary winter gives way to the rebirth of spring.

There are no requirements on what types of flowers can be used to adorn the altar at Easter, yet one in particular stands as

a symbol of the Pascal celebration — the lily. This flower also has particular significance in Catholicism in general. 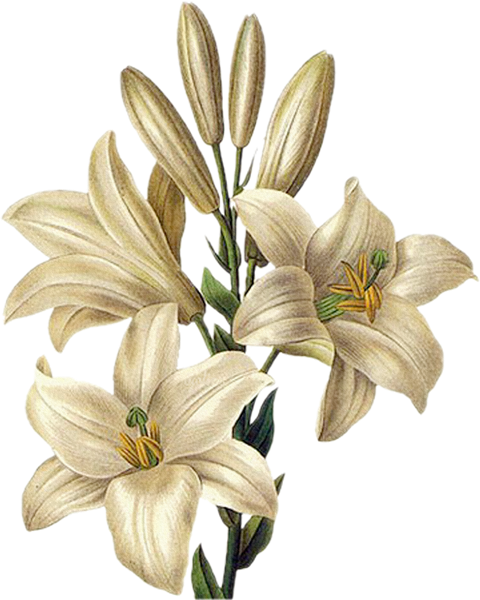 A prolific spring-blooming flower, the pure-white lily has come to represent Easter. There is a vast and beautiful variety of colors and types of lilies, but the Easter lily is unique in its meaning in relation to Jesus’s resurrection. Easter lilies have a distinct trumpet shape, which signifies Jesus’s triumph over death at the resurrection. The white of the Easter lily symbolizes rebirth and purity. A popular legend says that in the Garden of Gethsemane, lilies sprung up from the drops of blood that Jesus sweated during His agony.

Interestingly, what many Christians think of today as the traditional symbol of Easter is not very traditional at all in the Western world. Lilium longiflorum — known as the Bermuda or Easter lily — is a native of Japan, having been introduced to the United States in the 1880s, where it grew well in the climate of Bermuda. The species was nearly wiped out there by a virus and was reintroduced to the United States after World War I by a returning soldier. It eventually became a lucrative business for growers in the Pacific Northwest during World War II. Easter lilies came into great demand for two reasons: because they could be forced into bloom at Eastertime and because their white blooms had a long association with Mary, Joseph and many other saints.

There is another lily that sometimes is confused with the Easter lily. It’s known as the Madonna lily, scientific name Lilium candidum. In medieval times, the Madonna lily was closely associated with the Virgin Mary. The archangel Gabriel is sometimes portrayed as presenting Mary with a lily at the Annunciation, and her acceptance of the flower is a visual representation of her fiat to God. Prior to the introduction of the Easter lily, this flower, native to Europe and the Middle East, was the one known to most Western saints and therefore seen in portraits and statues. The Madonna lily is a temperamental grower and does not like to be forced into bloom, which is why it’s not as commonly used in church decoration.

Provided by Father Ryan Pietrocarlo, CSC
St. Casimir of Poland is represented in the stained-glass window of St. Casimir Church in South Bend, one of many saints depicted holding what is probably a Madonna lily as a sign of his peaceful nature and chastity.

The white lily has become the emblem for other saints known for their chastity, such as saints Maria Goretti, Kateri Tekakwitha and Dominic. There are two saints particularly associated with white lilies who are namesakes for churches in the Diocese of Fort Wayne-South Bend.

One such saint, who may not be widely known outside of Eastern Europe, yet is revered in South Bend, is St. Casimir. St. Casimir was a prince of Poland and Grand Duke of Lithuania in the 15th century. He is pictured in one of the parish’s stained-glass windows holding a lily of peace.

Born in 1458, Casimir was the third child of King Casimir IV of Poland. He chose a life dedicated to God rather than to the ambitions of his father. A legend surrounding St. Casimir is that at around age 15, he was sent to take the throne of Hungary by force, even though it seemed to him that such an act of war was not godlike. His soldiers began to desert and he himself abandoned the campaign and returned to Poland, choosing to follow God’s will instead. The young prince died of tuberculosis in his early 20s. He was known throughout Poland as a devout Catholic who spurned a life of luxury.

Due to his peaceful nature and desire to remain celibate, St. Casimir is often seen holding a lily. A portrait of him hangs in the Vilnius Cathedral in Lithuania in which he was buried. In the portrait, he has three hands; two right hands, one imposed upon the other and both holding lilies. Legend has it that the painter attempted to paint over one, but it reappeared; others say that the two hands were intentional and symbolized the prince’s generosity.

St. Anthony of Padua has two churches in the Diocese of Fort Wayne-South Bend named for him, one in South Bend and one in Angola. He has a connection to lilies as well. The saint often spoke of white lilies in reference to the purity of the Virgin Mary in his sermons. He was also known for his gentle nature and his integrity, which the lily represents.

There are two stories of miracles surrounding St. Anthony and lilies. In one, according to the Messenger of St. Anthony online magazine, a white lily was placed in the hand of a statue of the saint in Austria and the flower remained fresh and fragrant for over a year. Another miracle occurred on the French-controlled island of Corsica. During the French Revolution, religious orders such as the Franciscans were persecuted and forced to leave the island. Devotees of St. Anthony, left without their priests, placed lilies before a statue of him in an abandoned monastery. The lilies remained alive and vibrant months later, while the other flowers placed there had withered. Pope Leo XIII allowed lilies to be blessed in St. Anthony’s honor and there have been reports of miracles from touching the blessed petals, specifically healings of the sick.

While a popular choice for altar decorations, Easter lilies are certainly not the only flowers with meaning in Catholic tradition. Irises are known as a sign of royalty and are often seen in paintings of Mary. Tulips bring lovely color into church displays and symbolize belief and forgiveness.