Morning sun streaming through stained glass illustrated the joy of the Resurrection at St. Francis Xavier Church, Pierceton, on Sunday, as the rural parish celebrated the presence of Bishop Kevin C. Rhoades to celebrate the sacrifice of the holy Mass on Easter morning.

Worshippers filled the last seat of each pew for the solemnity. Led by the bishop and pastor Father Charles Herman, they renewed their baptismal promises during the Mass and proclaimed the miracle of their salvation throughout the liturgy with singing that testified to the faithfulness of the 150-year-old community.

“The tomb is empty!” … “He is risen from the dead,” the bishop proclaimed, just as the faithful had testified with choruses of “Alleluia” during the Gospel acclamation.

The Resurrection is the core teaching of the Church through the ages, Bishop Rhoades said.

“We proclaim this mystery of faith at every Mass when we sing after the consecration: ‘We proclaim your Death, 0 Lord, and profess your Resurrection until you come again.’ 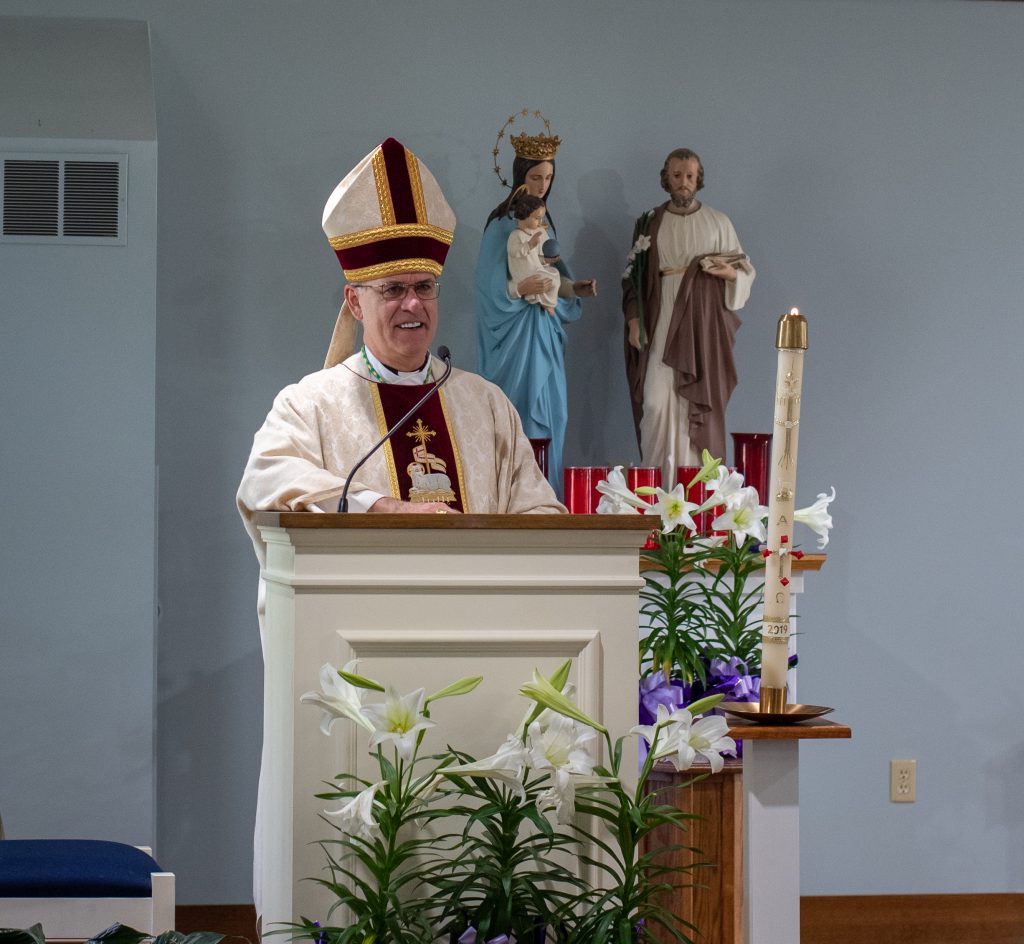 Pleased to say Easter Mass in a cozy parish church like Pierceton, Bishop Kevin C. Rhoades speaks on the promise of the Resurrection and later prayed for Christians in the country of Sri Lanka, more than 300 of whom had died earlier that day while worshipping. — John Martin

“After 40 days of Lent, a time in which we did not sing alleluia, today we again sing ‘Alleluia,’ a Hebrew word meaning ‘God be praised.’ We praise God with great joy today as we celebrate the resurrection of His Son, Our Lord Jesus Christ, from the dead,” he shared. “Easter is the Church’s greatest feast, not just one feast among others, but the feast of feasts, the solemnity of solemnities. Without the Resurrection, we would not even be here. The Church would not exist. If the Resurrection had not happened, there would be no Christianity. As St. Paul wrote to the Corinthians: “If Christ has not been raised, then our preaching is in vain and your faith is in vain.”

The resurrection of Jesus was a real, historical event, not a mythological story, he emphasized. “There was an empty tomb. That was enough for the beloved disciple, St. John, to believe. As the Gospel for the morning stated, when St. John entered the empty tomb, “He saw and believed.” 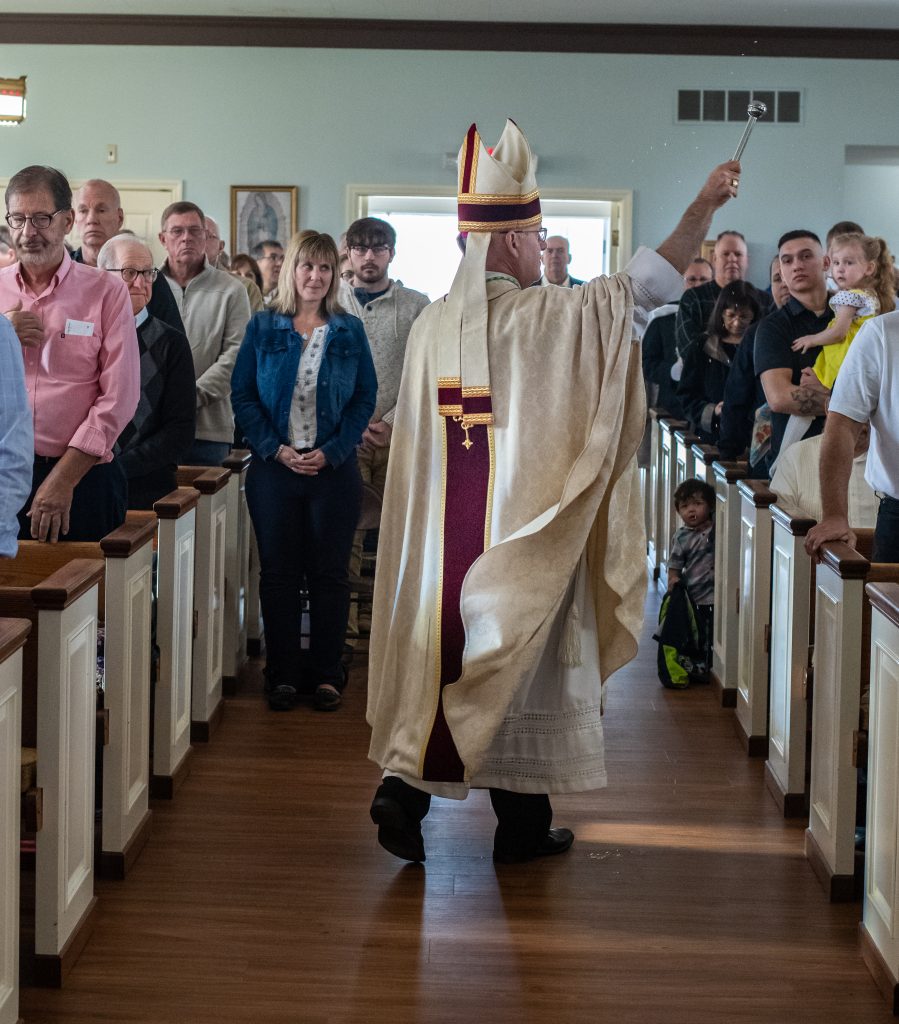 But there was more than an empty tomb. It was the appearances of the risen Jesus later that convinced Mary Magdalen, St. Peter and the other apostles and disciples of the truth of His Resurrection — disciples who, a few days earlier, had been devastated by the events of Good Friday.

“Their hopes were dashed. They probably thought Jesus’ mission was a failure, and that His message may not have been true. But the Resurrection confirmed their faith in all that Jesus had said and done while He was with them in His public ministry. Filled with joy in the resurrection, with faith that Jesus is the Resurrection and the Life, they would go out to all the world and proclaim this Good News. They would also go out, as Jesus commanded them, to baptize in the name of the Father, and of the Son, and of the Holy Spirit.

“How can the Resurrection of Jesus reach us and touch us and transform and lift up our lives?” he asked. “The answer is ‘Faith and Baptism.’ The saving event of Christ’s death and resurrection came to us in our Baptism, the sacrament of new life in Christ. According to St. Paul, the believer enters through Baptism into communion with Christ’s death, is buried with Him, and rises with Him.

“Think of those powerful words of St. Paul to the Romans which were read last night at the Easter Vigil: ‘Do you not know that all of us who have been baptized into Christ Jesus were baptized into His death? We were buried therefore with Him by baptism into death, so that as Christ was raised from the dead by the glory of the Father, we too might walk in newness of life.’

Because of baptism, in which Christians become one with Christ and His Body, the Church, we live in Christ, he continued.

“The Resurrection of Jesus seized us. We thus can live our life in Christ as a journey of faith. Amid the challenges and sufferings of life, and even in the midst of the greatest trials, including death, we live in hope.

“My brothers and sisters,” he concluded, “the tomb is empty. The Resurrection of Jesus is the crowning truth of our Christian faith. Easter is the Church’s greatest feast.

‘This is the day the Lord has made; let us rejoice and be glad.’ Alleluia!” 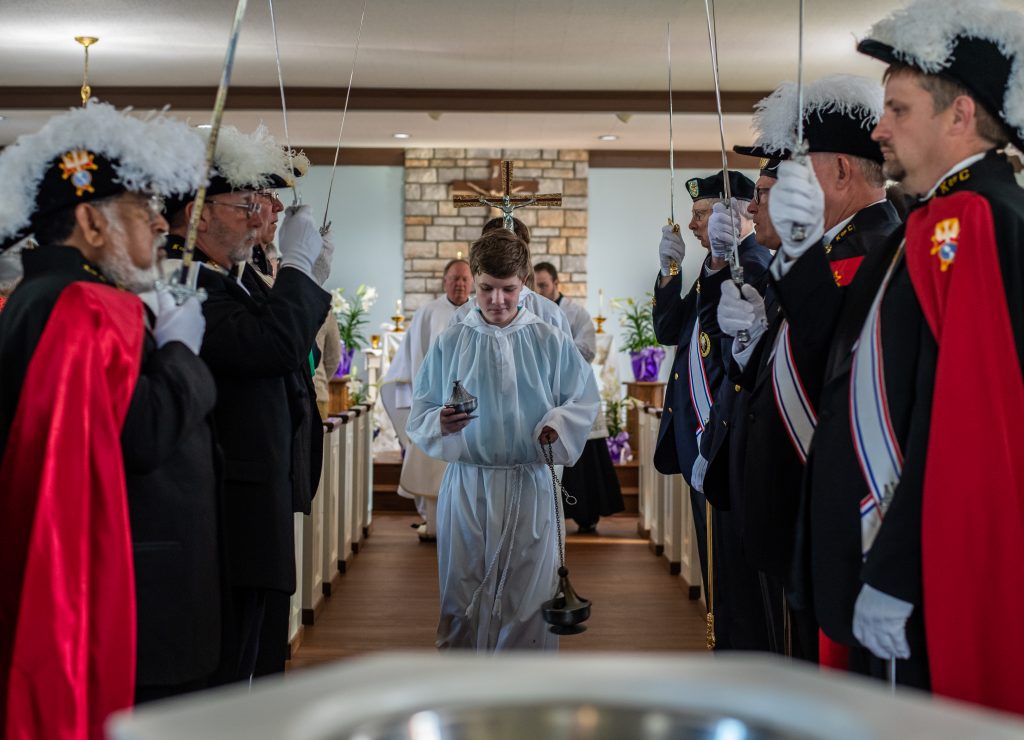 The bishop’s visit at St. Francis Xavier was appreciated by many, including Austin and Lisa Mutchler and their daughter Madison, who worshipped in celebration of the Resurrection, the bishop’s visit and Madison’s 22nd birthday. Participation in the Mass by the Bishop Pursley Assembly 1974 Knights of Columbus, in full regalia, also acknowledged the honor of receiving the bishop.