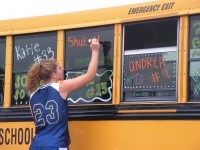 Junior catcher Elaine Rorick puts finishing touches on the team bus windows before the Bishop Dwenger Lady Saints board the bus and head for their first-ever state softball appearance.

FORT WAYNE — In his early duties as the new principal at Bishop Dwenger High School, Jason Schiffli prepared powerful, celebratory remarks to sendoff the Lady Saints before a first-ever bus ride south to Indianapolis for the Class 3-A IHSAA state championship softball game on Saturday afternoon in the school’s parking lot.

Joined at the podium by three priests representing St. Jude, St. Vincent and St. Charles parishes, where many of the players are members, Father Tony Steinacker, parochial vicar at St. Charles, felt Schiffli’s comments were “hard to follow” and felt “ditto” was all he could add.

The principal reminded the girls that great moments are born from great opportunities and told them that winning becomes a habit when you make a habit of doing things right. He felt the girls had been “doing things right” this season and it showed on the field all season long.

He referred to personal quips about several of the girls’ fancy latte drinks and designer sunglasses, but more importantly how much each player believed in the teammate next to them. Schiffli concluded by asking each member of the team to think of one special person to dedicate their game to and then requested they also remember their outgoing athletic director, Andy Johns, and retiring principal, J. Fred Tone.

Although not able to be present for the game because of a long- standing prior family commitment, Tone, one of the Lady Saints’ biggest cheerleaders, left instructions to “Win One for the Toner.”

Head Coach Dave Moyer was brief, simply turning the microphone over to senior Maureen Denihan who took on the job of inspiring the team the whole year long. The first baseman told fans how much her group thrived on their unity and charged down the lineup giving high fives. 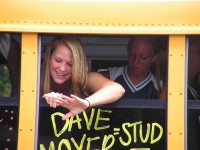 Johns chimed in what many fans and parents in the crowd were also feeling: “Back in March and early April, this team started playing well. I knew we had something special.”

Coach Beth Peters recalled her prediction earlier in 2010 how she would be busy this particular weekend in June.

Following Father Steinacker was Father Tom Shoemaker, pastor of St. Jude Parish, who shared with the girls that the gifts that got them to this point are God’s gifts. Father Jason Freiburger, parochial vicar at St. Vincent de Paul Parish, added what impressed him most about this team was their teamwork. He concluded, “Make history today, girls!” 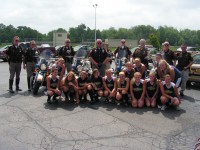 Before loading the bus for the state softball championship, the Bishop Dwenger Lady Saints pose for a picture with an entourage of sheriffs, who led the police escort with sirens blaring to the county line.

And make history Bishop Dwenger did. Rated No. 8, the Lady Saints posted not just their first-ever softball state championship win, but an unbelievable, come-from-behind 9-8 win against the top-ranked, 34-1, Lady Pioneers from Booneville.

Down 1-7 in the fifth inning, Andrea Filler led the start of an amazing Saints’ rally with a three-run homer to dead center. The scoring frenzy continued when Kelsey Richard singled in another run by Elaine Rorick to close the gap, 5-7.

In the sixth inning, the leadoff lefty, Erica Miller singled and Laura Merz sacrificed a run. Then shortstop Ashley Burkhardt had a crucial double to bring in Miller. Now the Saints were down just a single run, 7-8.

Erin Boedeker singled to drive in Rorick in the bottom of the seventh. Then Sara Spaulding sacrificed Boedeker to third just before the freshman (Miller) knocked her in for the win. The first run of the game was scored by Maureen Denihan crossing the plate on one of two huge doubles from Rorick. In the No. 6 spot, Rorick went 4-4 in the championship game.

With three freshmen in the starting lineup and just the three seniors listed on the roster, the Saints may be a heavy favorite for a 2011 repeat trip of a lifetime. In addition to their explosive hitters from top to bottom, their relentless defense and ace pitching, junior catcher Rorick detailed how well the Lady Saints get along on and off the field — a special team chemistry and a special team comradere that is hard to describe — evidently, a vital piece to winning a championship. The backstop summarized the whole season culminating in a state title as “just unreal.”