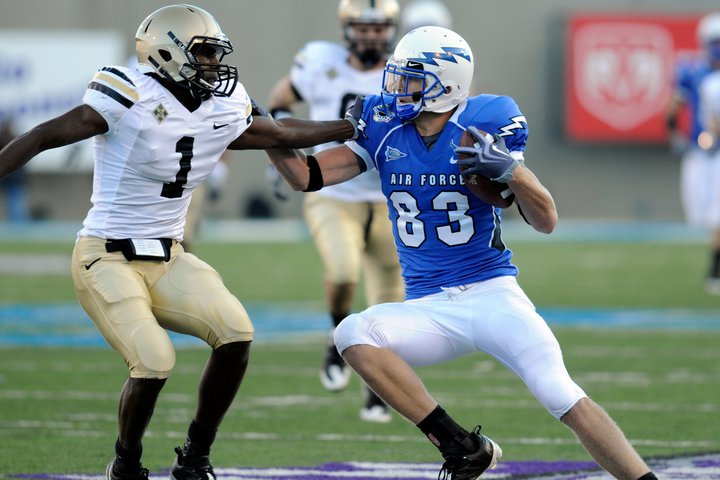 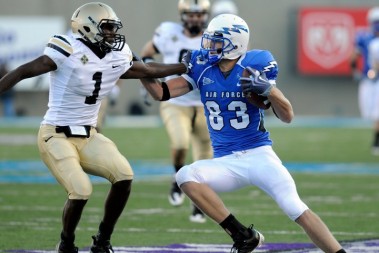 COLORADO SPRINGS, Colo. — Fort Wayne native and former Bishop Dwenger High School gridiron standout Kevin Fogler is nearing the end of an illustrious football career and an outstanding four-year deployment to Air Force Academy where he has been a star both on and off the field.

Wearing No. 83 for the Falcons, the 6-foot 5-inch, 215-pound wide receiver led his team as a junior with 25 receptions, 567 receiving yards and five touchdown catches averaging 22.7 yards per catch. He was ranked ninth in his conference in receiving yards per game.

Because he has been on the dean’s list five times for academic excellence and is carrying a 3.61 grade point average, Fogler has recently been named to the CoSIDA ESPN Academic All-District® football team as released by the College Sports Information Directors of America.

Fogler earned first-team District VII honors in the university division and will be on the ballot for Academic All-America honors to be announced in late November. Capping off his senior year highlights was a recent nomination by the National Football Foundation and College Hall of Fame (NFF) as one of 121 semifinalists for the 2010 William V. Campbell Trophy. Although he did not advance to the final round of 15, being chosen as one of the brightest and the best in his field was quite an honor.

In a phone interview with Today’s Catholic from Colorado, Fogler explained, “It is a great honor and very humbling experience to be nominated for these great awards.” NFF Chairman Archie Manning, whose sons Peyton (1997 Campbell Trophy winner) and Eli were named NFF Scholar-Athletes in 1997 and 2003, respectively, explained, “This year’s Campbell Trophy semifinalists embody the NFF’s mission of building leaders through football. ”

He added that the schools represented by a semifinalist should take great pride in being represented by such well-rounded young men who will undoubtedly go on to do great things in life. To be nominated by his school as a candidate for the esteemed group, Fogler had to meet the following criteria: be a senior student in his final year of eligibility, maintain a GPA of at least 3.2 on a 4.0 scale, have outstanding football ability as a first team player and have demonstrated strong leadership and citizenship. Florida’s Tim Tebow was the 2009 recipient.

Fogler, who is majoring in management and minoring in Spanish, spent part of the summer of 2009 in Spain training in language immersion. He also completed the powered flight program and worked the assault course during Basic Cadet Training this past summer.

Fogler, who enjoys golf and snowboarding, is the son of Bruce and Sue Fogler, of St. Charles Borremeo Parish in Fort Wayne. His siblings include Beth, Brian and Anne and his grandmother is Carol Eifert of St. Vincent Parish. After graduation, Fogler hopes to go to pilot training somewhere in Mississippi with a long-term goal of becoming the CEO of a major company.