The two met at the Mishawaka high school when Speece was 15 and Hoff was 17. Their art teacher had encouraged them to write a song that represented Marian as part of a statewide arts competition.

“And I was kind of into Jillian,” Hoff recalled, “but didn’t really think the feelings were reciprocated. So we wrote the song together, and the music kind of brought us together in a way that we were able to start working with each other, and through that blossomed a relationship.”

“I was actually very lucky that songwriting was one of my gifts because it actually brought us together,” he said.

Speece noted that Hoff “was really quiet in high school,” and that she was “not sure what to do with him.”

“But then, when we started writing the song together, I would go to his house, and then we’d be talking for hours. I’m like, ‘Oh, he’s actually really funny. And he was just shy.’ Then the music brought us together. We were writing and performing together, and we had a lot of chemistry on stage, which helped a lot.”

Hoff’s musical journey began at St. Jude School in South Bend. One of his art teachers lent him a guitar, and he used a penny as a guitar pick to learn how to play the instrument. 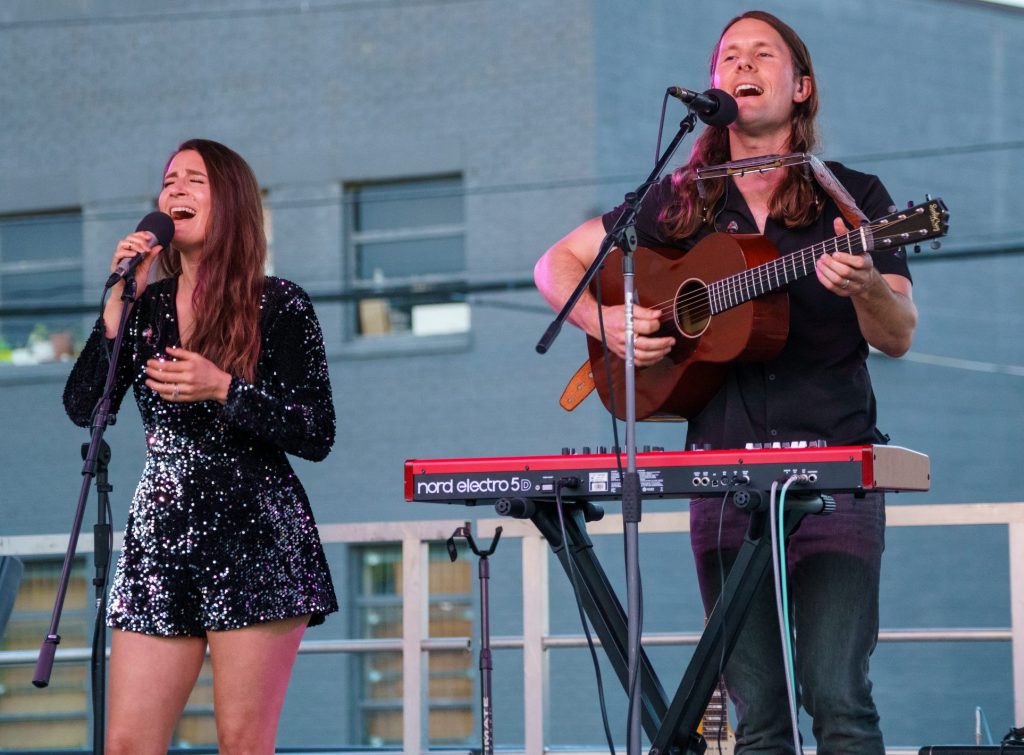 Speece developed her talent when she would come home from school at Corpus Christi in South Bend, and play cassettes of Norah Jones and the Beatles and learn how to sing the songs while she did her homework.

“I loved singing – I loved performing. I would practice every single day and I was enthralled by music. I started writing songs shortly after,” she said.

“And I was very lucky because, the way I looked at it, I felt like I was being called to be able to play golf all day long and then play music in the evening. And that kept me out of trouble and focused. I was very thankful for that.”

“I ended up getting a full ride to IPFW where I played golf and it was really impressive, highly competitive, which I loved. I learned a lot about character building from golf. I learned a lot about work ethic and also just about myself and having a really good temperament and staying cool and zen under pressure.”

The two athletic musicians followed the same daily routine in college. They completed workouts in the early morning, attended classes, then practiced with the golf team. After practice, they wrote songs together.

At that point, they realized that they needed a name.

They recalled that Hoff went to lunch one day at a co-op and found a bergamot essential oil. After thinking its aroma was “uplifting,” he showed Speece and they realized that they could name their duo after the oil.

“The whole vibe of bergamot is uplifting one’s spirit,” she said, “and that’s what we want to do with our music.”

From there they began touring.

At one point, The Bergamot was invited to open a show for One Republic, but the performance was canceled when the COVID-19 pandemic struck.

“It was a moment where we found ourselves at probably our closest breakdown point because we lost all of our income for two years,” Speece said, “and that’s never happened to us before. And COVID shut down the music industry so hard. We had to come and grieve this.”

She says that they had to “lean into” their faith and pray to God because they didn’t know where to go.

“And then within 12 hours, a patron of the art who loves our music called us and said, ‘Hey, get in your van and drive to Sedona. We’ve got a second house that you guys can live in for free. Nobody knows what’s happening. We want to make sure you’re safe.’”

Speece said that miracles would arise from similar “tragic experiences” over the past two years, calling them “huge faith builders” and noting that these experiences also gave them the opportunity to produce a documentary.

“The idea was to go to all 50 states,” Hoff explained, “to have people take our touring vehicle, which at the time had 264,000 miles on it, and to take that to all 50 states and have people sign it with their message of unity during the 2016 election cycle.” 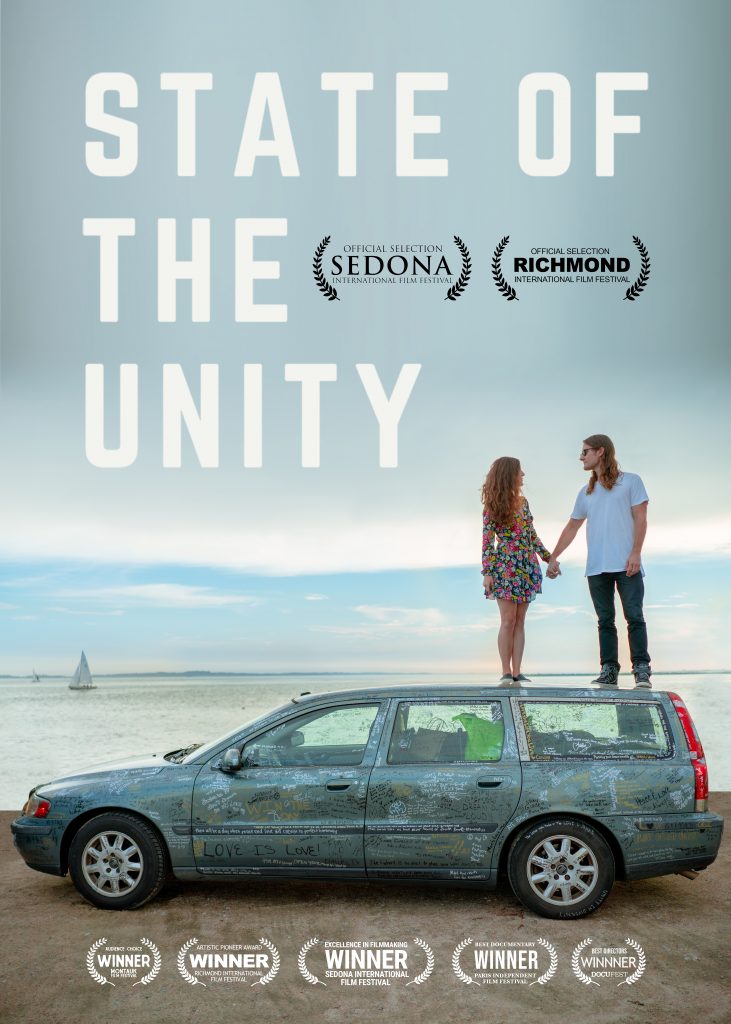 While they had set out to make a film about going to all 50 states, what they ended up with, according to Hoff, was a documentary that furthered an “understanding of unity, what it looks like, what it actually is, and what it actually isn’t, and ways that we can grow forward.”

After several years of post-production, they finally released the documentary, “State of the Unity,” in early 2022. In the end, they auctioned the car off and gave the proceeds to Memorial Children’s Hospital in South Bend (now Beacon Children’s Hospital).

The two have a particularly close and unique tie to the Catholic community in South Bend. Hoff’s great-uncle was Father Leonard Chrobot, a priest who served several South Bend-area parishes and was a professor at the University of Notre Dame.

“I was able to work with him on a lot of things growing up when I had a lot of questions about religion,” Hoff remembered, “questions about faith and understanding and when I was doubting certain parts of my own faith, my own journey. He was just such a very soft-spoken but also well-versed person.”

Hoff and Speece went through marriage preparation courses with Father Chrobot, who ultimately married the couple in South Bend.

“It was just so amazing getting to do our course with a family member who was a priest,” Speece said, “because we could talk in depth and ask questions … and he would just smile and he’d say, ‘Well, let’s talk about it.’”

She remembered that Father Chrobot would come to Hoff’s family members’ homes to celebrate Mass on Christmas and other special holidays.

“It was just so special because, like, who gets to do that? It’s really cool, and it made me feel really connected with Jesus’ actual journey. Because, if you think about it, they were traveling in and out of people’s houses, all throughout Jerusalem and Galilee and Nazareth, and it was very intimate and very raw.”

Hoff said that, overall, his experience with The Bergamot changed his life and helped him understand more about his life and religion. 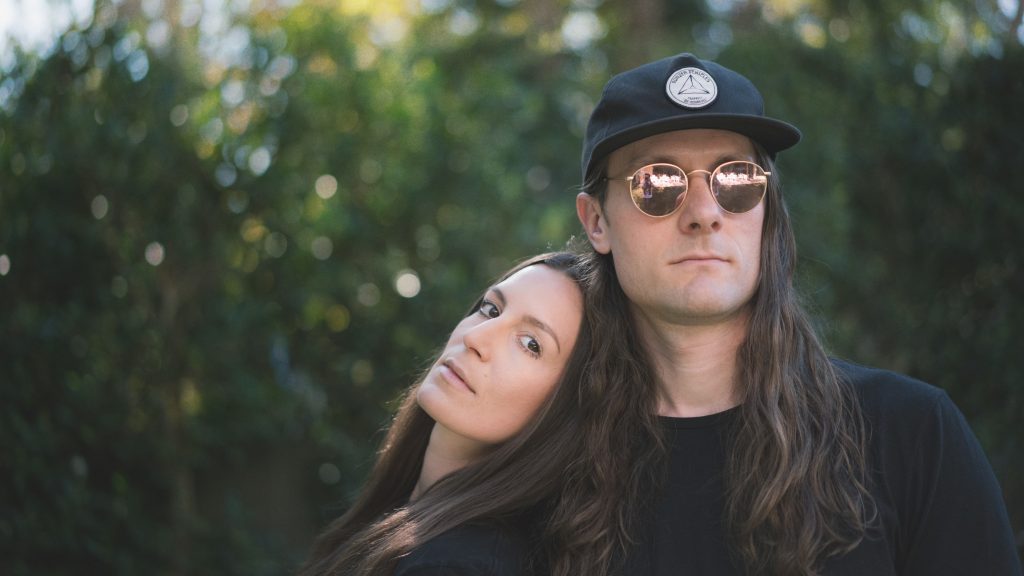 “I think about Jesus’ journey. And I think about his connection with people from all parts of society, and how he was kind of an outcasted individual. I think about the journey that we’ve been on as musicians, like I said jokingly – taking that vow of poverty that we’ve had over the last 10 years.”

He added that a lot of what he learned in his time in Catholic schools gave him the tools to deal with the problems that he encountered throughout his time with The Bergamot and in his life.

“I just feel really lucky that I grew up in the Midwest, and I have these roots,” Speece concluded, “because I feel like my faith has guided me to this point and keeps the art alive: keeps what we’re doing alive. There’s a lot of really cool miracles that have happened in our life constantly. And I would say, especially over the last two years, I just feel really grateful to God for all of those.”

Those interested in hearing The Bergamot perform live can catch them at their “Ogden Dunes Beach Party” on Sept. 3, and at the Morris Performing Arts Center in South Bend on Oct. 1. More details can be found at www.thebergamot.com.