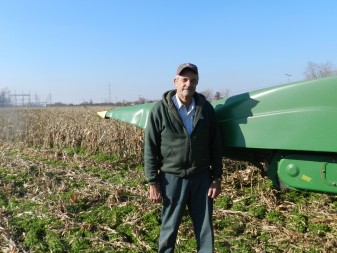 Mick Lomont stands with his combine. The Allen County farmer and member of St. Louis Besancon Parish in Monroeville relies on his faith in his profession.

NEW HAVEN — During his 73 years on the farm, Mick Lomont, of rural New Haven, has seen dreadful crop conditions, but never quite like 2012. “It was the poorest corn crop I ever remember,” confirmed the life-long, full-time farmer.

What made for such an difficult growing season was the severe lack of rain coupled with extreme heat during the crucial window for flowering and corn pollination.

According to the National Weather Service observations at Fort Wayne International Airport, the month of July touted 17 days of consecutive temperatures reaching 90 degrees or higher — five of those days topping 100 degrees, setting all-time records. Just as damaging, there was not more than a trace of precipitation logged for those same 17 days in a row.

Gonzalee Martin, agriculture and natural resources educator with Purdue University’s Allen County extension office, added, “Many parts of Allen County went 60 days with no rain.” The extensive heat, along with the lack of rain proved to be back-breakers for the corn crop when harvest time came.

Martin reports that just a year ago, the average corn yield was 132 bushels per acre with some fields as high as 225 in 2011. This season, some corn produced no ears at all. Allen County averaged a miserable 40-100 bushels per acre severely slashing the profit for the farmer.

“The combine monitor actually registered zero (when measuring the yield) in some parts of certain fields,” explained Lomont.

Even with the low yield this year, for many farmers crop insurance policies will kick in to provide some cushion. Most lending institutions require a producer who carries an operating loan to have some level of coverage against loss.

Lomont, for instance, carried coverage referred to as G.I.R.P. (guaranteed income revenue protection). When input costs, along with cash rent, can run as high as $500/acre, a failed crop can be financially devastating. As he watched the conditions worsen during the summer months, Lomont explained, “It was a huge relief to know that at least we would be getting a portion of our expenses back.”

Also, qualified farmers may be eligible for low-interest emergency loans as announced by Indiana’s Lt. Governor Becky Skillman and Indiana State Executive Director of the Farm Service Agency Julia Wickard. As of Sept. 5, 2012, all 92 Indiana counties were designated primary natural disaster areas by the U.S. Department of Agriculture (USDA) due to the impact of excessive heat and drought. The USDA reviewed the Loss Assessment Reports and determined sufficient production losses to warrant such a declaration.

“It’s been one challenge after another this year for our farmers, who provide so much for all of our families,” said Skillman. “This is another great step in the recovery process, and we remain committed to helping members of our agricultural community get through these difficult times and move forward with renewed optimism.”

Remaining optimistic in difficult times is a challenge for people in any profession, but especially farmers when much of what impacts their livelihood is out of their control. Lomont’s father worried constantly. “The sky was always falling down,” Lomont recalls affectionately.

Over the years, the younger grain operator realized the worrying changed nothing. When other family members and neighbors start to panic and ask, “Aren’t you worried?” the faith-filled member of St. Louis Besancon Parish typically remains calm and relaxed. “Although it can be human nature, I try hard to keep in mind that the Bible calls us ‘not be worry or be anxious’ (Phil 4:6-9). I get concerned, but trust that God will always provide,” he said.

Although he admitted this year, “It got almost depressing,” when referring to his practice of weekly crop tours to check on his fields during the growing season. Experiencing the drought has Lomont more appreciative of the rains and the rich soils, “You take for granted the rains will come when you need them. When they don’t, it makes you all the more grateful for the years they do. All you have to do is look around the world and see how blessed we are to have such fertile ground here in the United States.”

Lomont grew up under guidelines not to work on Sundays and has strived to remain faithful to his upbringing regardless of unfavorable forecasts and crunch time situations. He said, “It was always a day of worship, rest and family time.”

Lomont’s father also instilled in his three sons the importance of being good keepers of the land, “Dad always told us to ‘leave the soil in better condition than you found it.’ We are just stewards passing through.”

There was a positive for grain operators in 2012: soybean fields produced a bumper crop. Lomont detailed, “Unlike corn, beans are forced to root deeper when there is not enough surface moisture. This provided excellent results when the late rains finally did come.” Martin’s data for Allen County showed that 2011 bean fields yielded 43 bushels to the acre on average. This year, it was not uncommon for a plot to top 70.

“Another ‘first in my lifetime’ came when bean fields yielded more than the corn fields,” added Lomont.

However, the widespread drought took a heavy toll on grazing land. When pastures in rolling areas of the country dried up, livestock producers were forced to sell off herds of their breeding stock or pay sky-rocketing hay prices. This will significantly impact the cost of meat at the grocery store. Although they may remain normal for the short-term, Martin predicts corn related products, along with beef and pork prices will reach record levels in 2013 for the consumer. The poor corn yields will create a short supply, but consumer demands will drive prices higher and higher.