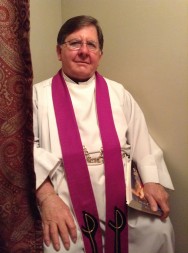 Msgr. Bernard Galic is shown in the confessional at St. Aloysius Church in Yoder.

YODER — Pope Francis, at a recent weekly general audience inside St. Peter’s Square, encouraged the faithful to be “Be courageous. Go to Confession.” The pope added, “Don’t be afraid of Confession.”

The priests of the diocese would share the pope’s words of encouragement as well. Msgr. Bernard Galic, pastor of St. Aloysius, Yoder, and the diocesan vocation director, has spoken about Reconciliation at parish missions, and recently shared some highlights of the sacrament with Today’s Catholic.

Reconciliation is the perfect Easter gift

Msgr. Galic explained that Confession was an Easter gift that Jesus bestowed upon the Church on the night of His Resurrection. Jesus appeared to the Apostles, breathed on them and said, “Receive the Holy Spirit. Whose sins you forgive are forgiven.” That was the institution of the sacrament of Reconciliation.

“When you think about it, it was the perfect gift,” reflected Msgr. Galic. “The reason He came into this world was to free us from the tyranny of sin, and He accomplished that by dying on the cross.”

In empowering the Apostles and the Church through them to forgive sins until the end of time, He continues to do the work that He accomplished by His death on the cross, freeing us from the grip that the devil has on us, Msgr. Galic said. “So it’s a perfect Easter gift.”

“What Jesus does for us in the sacrament of Reconciliation,” Msgr. Galic noted, “is restore us to innocence.”

“When He forgives our sins, He forgets them,” Msgr. Galic said.

When making a good Confession, Msgr. Galic said, “we have the innocence that was ours on the day of our Baptism.”

“And that is so significant,” he said. “There is no record of our sins once we’ve gone to Confession. God doesn’t keep records.”

And God never tires of forgiving us, Msgr. Galic added. “He never brings up our past against us once we are forgiven. That’s the beauty of the sacrament. We can leave all of that behind.”

When Jesus died on the cross, He wanted to take the burden of guilt from us.

“For us to wallow in the misery of our past sins,” Msgr. Galic commented, “would be to effectively say, ‘Thank you, but no thank you’ to Jesus. He took that burden when He died. He wants us to be free of the burden. That’s why forgiveness is so complete and we begin again — literally made over.”

“So what is there to fear?” Msgr. Galic asked. “There is everything to be gained and nothing to be lost.”

For those people with a troubled conscience, Msgr. Galic said they should see the sacrament of Reconciliation as an opportunity — not just forgiveness of sins — but for guidance for spiritual growth, guidance for dealing with temptations, guidance for discerning the path God wants them to walk for salvation.

“All of that is available through the sacrament of Reconciliation, along with absolution for your sins,” he said.

Gift of the Priesthood

The two most unique aspects of the ordained Priesthood, Msgr. Galic said, is the fact that the priest has the power to change bread and wine into the Body and Blood of Christ and the priest has the power to absolve people from their sins. “Those two things are given to no other person, only the ordained priest,” Msgr. Galic said. “And it’s an enormous privilege to be able to administer both of those sacraments.”

“When we’re talking about the sacrament of Reconciliation, it’s a humbling experience,” Msgr. Galic said. “Sometimes when we listen to confessions, we wish we had the virtue of those people who are confessing to us.”

It’s humbling because “we know that when we absolve sins, they’re free,” Msgr. Galic said.

“To be at the bedside of someone who is dying and who has been away from the Church, to know that when I have given them absolution or given the apostolic blessing at the time of death, these people are going to close their eyes in this life and open them in paradise because of the power that Jesus entrusted to the priests through the Church. It’s an awesome responsibility,” Msgr. Galic said.

“But the advantage to regular Confession,” he said, “is that ‘regularly,’ one examines his conscience, ‘regularly’ he identifies for himself where his strengths lie, or where his weaknesses are. And knowing his weakness, he knows clearly where he needs God’s help the most.”

St. Paul says, “I glory in my weakness because they bring me to God.”

Regular Confession helps one know oneself, Msgr. Galic noted, even when one confesses just venial sins.

Msgr. Galic’s advice to people, especially when instructing someone in the faith, is “as we pray regularly, as we participate in Mass regularly, as we receive the Eucharist regularly, we should be receiving the sacrament of Reconciliation regularly to help us stay on the path leading to Christ, to help us grow in virtue, to help us be aware, so we can overcome our weaknesses when they can be overcome and to depend on God’s grace on those weak moments of our lives.”

Regular Confession raises a consciousness or a need for that.

“I suggest every month is a good practice,” Msgr. Galic offered. “It’s a good way to keep in touch with myself. I think if we go less often than that it becomes too easy to overlook the sacrament.”

One of the difficulties, Msgr. Galic said, is we can become comfortable with the habits of venial sin. “And venial sin can make us more liable to fall into serious sin if we become less concerned about venial sin,” he said

Every sin is an offense against God, who is all good. Scripture, he instructed, makes the distinction, however, that not all sins are deadly.

“If I wait until I am guilty of mortal sin before I go to Confession, then my use of the sacrament of Reconciliation marks the low points in my spiritual life,” he said. “I kind of find myself crawling on my belly looking for forgiveness.”

Away for some time

When someone has been away from the sacrament for some time, Msgr. Galic said he would say, “Thank God you are here. You are right where God wants you to be.”

He would tell the penitent if they are not sure how to start, just say, “Father give me some help,” and he will help walk them through a good Confession, starting with a examination of conscience.

For those who confess the same sins when using the sacrament, Msgr. Galic said, “The fact that you recognize that says, ‘Now I know where I am weakest. Now I know where I most need God’s help in my life.’ So when I am approaching those situations when I find myself weakest, I reflect on the need to ask God to help me deal well with this situation.”

“Some of our weaknesses never change,” he noted, but, “we don’t overcome every weakness. Some we can overcome, but others we learn to live with, with the help of God’s grace.”

“Sometimes people think they are going to shock the priest,” Msgr. Galic said. “I don’t think anybody needs to worry about anything he is going to say to the priest, or worry about upsetting him or shocking him.”

He could not think of a sin that he has never heard.

“Jesus welcomed sinners and dined with them,” Msgr. Galic said. “That was a big criticism of His enemies. And the priest is in the confessional to welcome sinners.”

The Light is On For You

The Light is On For You is a diocesan outreach for all parishes to offer Reconciliation. It’s an effort to alert people to the fact that priests are available for the sacrament of Confession on Wednesday, March 12, from 6-8 p.m.

“The fact is,” Msgr. Galic said, “priests are available for that sacrament every day, even without worrying about what times Confessions are scheduled.”

Any time someone asks a priest, ‘Father, do you have time for a Confession?’ a priest will always say, “yes.”