SOUTH BEND (CNS) — The University of Notre Dame observed the conclusion of Religious Freedom Week in the U.S. with a Religious Liberty Summit June 28-29 that invited ecumenical leaders and scholars from around the nation to discuss the various challenges to religious liberty.

Religious Freedom Week is observed June 22 to June 29 each year. The annual observance, sponsored by the U.S. Conference of Catholic Bishops, always begins on the feast of two English martyrs who fought religious persecution, Sts. Thomas More and John Fisher, and ends with the feast of two apostles martyred in Rome, Sts. Peter and Paul.

Cardinal Timothy M. Dolan of New York, chairman of the U.S. bishops’ Committee for Religious Liberty, set the tone for the Notre Dame conference in his keynote address, observing that religious freedom is a human right, “essential to the dignity of the human person and the flourishing of all that is noble in us.” 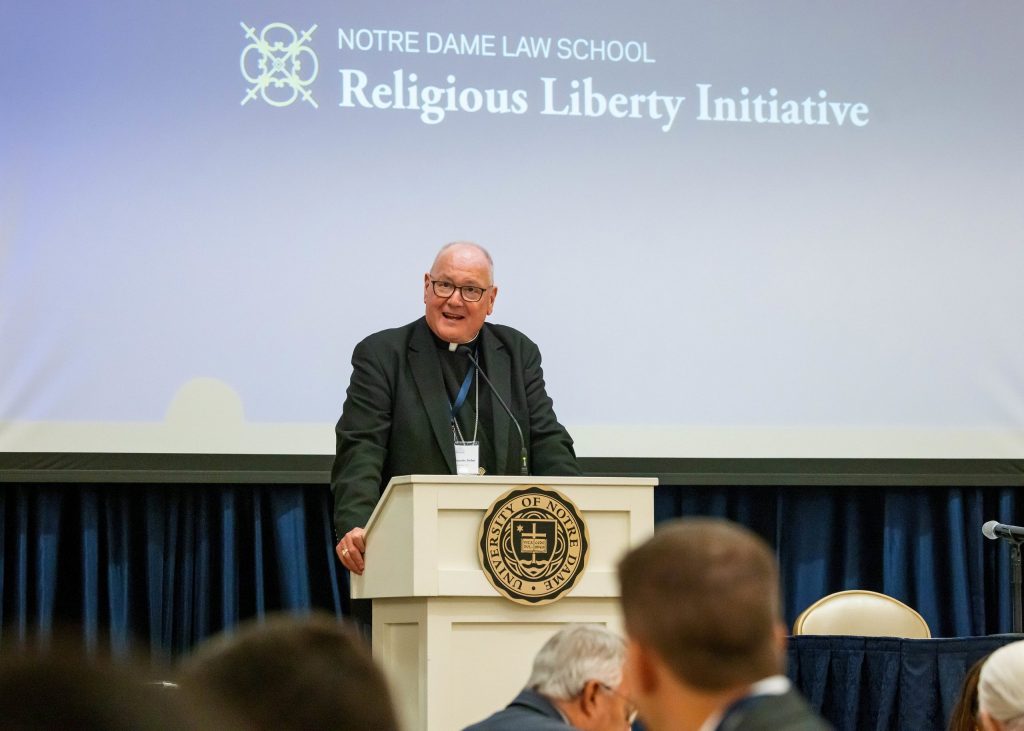 He noted that defending religious freedom used to be “a nonconfrontational no-brainer,” as American as “mom, apple pie, the flag and Knute Rockne.” Now, he continued, defense of religious liberty has become “caricatured” as an “oppressive, partisan, unenlightened, right-wing crusade,” even considered by some to be discrimination.

This false narrative must be corrected, Cardinal Dolan stressed, and he proceeded to do so by discussing the concept of religious freedom enshrined in the founding documents of the United States. He made four major points in his keynote, titled “Correcting the Narrative.”

Second, religious liberty is not a conservative issue, but historically considered part of a movement that is “progressive and reforming.” Cardinal Dolan, who has a doctorate in American church history, observed that freedom of religion is “the first line of defense of/and protection of all human rights.”

Further, religious liberty has been “the driving force of almost every enlightening, unshackling, noble cause in American history,” he said, including movements such as abolition of slavery and the campaigns for voting rights and civil rights.

Third, “religious freedom is enshrined not to protect the government from religion, but religion from the government,” Cardinal Dolan explained.

The various religious groups who first settled in this country did not want special treatment from the government, but rather just wanted to be left alone to practice their faith, worship in their tradition and follow their consciences in the public square. Thus, freedom for religion became a keystone in the country’s founding documents.

Fourth, throughout most of history, American culture welcomed religious voices in the public square, Cardinal Dolan said. Then the culture moved to neutrality before arriving at the present moment, in which believers face “downright antagonism,” and the message that we must leave our conscience behind when we enter the public square.

Panelists of various faiths who spoke at the conference indicated no disagreements with Cardinal Dolan’s assessment, and in fact stressed the necessity for all people of faith to work together to defend and promote religious liberty in this country and abroad.

In a panel on “Overcoming Polarization of Religious Liberty,” Asma Uddin, a Muslim attorney and scholar, said that people of various faiths have to stop berating each other if believers are to move forward in obtaining and preserving religious freedom.

The author of “The Politics of Vulnerability: How to Heal Muslim-Christian Relations in a Post-Christian America,” Uddin said that people will feel less threatened if they stop emphasizing their differences and focus on their common status as human beings.

A panel on “International Threats to Religious Liberty” featured international speakers, including a representative of the Aid to the Church in Need, Marcela Szymanski. She reported that 62 countries present a danger to their citizens when it comes to religious liberty, even though most of those countries have signed the International Treaty on Human Rights.

A panel on “Religious Liberty and the Press” included representatives of the secular media and one Catholic spokesperson. Gretchen Crowe, editorial director for Our Sunday Visitor periodicals, explained that the Catholic press seeks to form and inform its readers to advance the mission of the Church. That can include filling in gaps, correcting misinformation from the secular media and providing clarity on significant issues, she said.

Bishop Kevin C. Rhoades of Fort Wayne-South Bend, who is a member of the bishops’ religious liberty committee, welcomed participants to the diocese and praised the Notre Dame Law School for establishing the Religious Liberty Initiative.

That initiative, begun by Dean G. Marcus Cole of the law school, will assemble international scholars to study the issue, train law students to defend religious freedom by pursuing claims in the courts, and organize events like the June summit. Two future summits are planned for Rome in 2022 and Jerusalem in 2023.

Bishop Rhoades told the conference that not only was the initiative a great service to the Catholic Church and to all communities of faith, but also a service to our nation at a time when not just freedom to worship is threatened, but so too is the freedom to live out our faith and bear witness to its moral truths in social services, schools and other institutions that serve the common good.

“Religious freedom allows the Church and all religious communities to live out their faith in public and to serve the good of all,” Bishop Rhoades said.