WASHINGTON (CNS) — Expressing concern for the doctrinal soundness of some of the lyrics of Catholic hymns now available for use in Catholic liturgies, the U.S. bishops’ doctrine committee in a forthcoming report suggests guidelines for bishops in evaluating hymn lyrics and for selecting hymnals being considered for use in churches.

An accompanying memo said the document is to “assist bishops in their oversight of liturgical celebrations in their dioceses and in the granting of the imprimatur.”

It also encouraged bishops to “share this resource with composers and hymn publishers in their dioceses” as well as “diocesan worship officers, pastors and parish musicians.” It also said that the doctrine committee “is available for any bishop who desires assistance in the evaluation of hymns or hymnals.”

The committee document identified six areas of particular concern, a principal one being the treatment of the Eucharist. It warned that “a steady diet” of doctrinally deficient hymns “would erode Catholic sensibility regarding the fullness of Eucharist teaching, on the Mass as sacrifice and eventually on the Church, as formed by that sacrifice.” 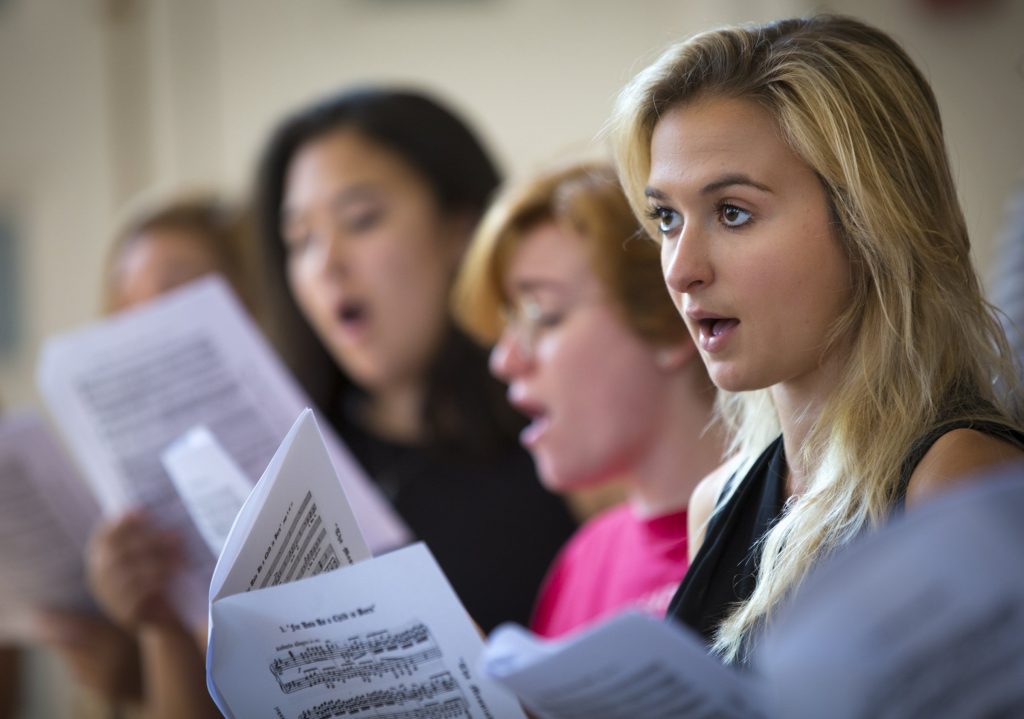 Members of The Catholic University of America Chamber Choir sing during an Oct. 10, 2017, rehearsal at St. Vincent de Paul Chapel on the campus of the Washington university. The U.S. bishops’ doctrine committee, in a forthcoming report, suggests guidelines for bishops in evaluating hymn lyrics and for selecting hymnals being considered for use in churches. (CNS photo/Chaz Muth)

The document, titled “Catholic Hymnody at the Service of the Church: An Aid for Evaluating Hymn Lyrics,” was produced by the Committee on Doctrine of the U.S. Conference of Catholic Bishops.

A copy of the report and memo were obtained by Catholic News Service.

The report acknowledged several areas of doctrinal deficiency in some contemporary hymns and suggests two guidelines in “determining whether a hymn is doctrinally suitable for liturgical use”:

— “Is the hymn in conformity with Catholic doctrine?”

— “Is the hymn expressed in image and vocabulary appropriately reflective of the usage of Scripture and the public liturgical prayer of the Church?”

In a memo accompanying the document, the committee said its report is modeled on a 1997 report by Indianapolis Archbishop Daniel M. Buechlein on “Ten Common Deficiencies in Catechetical Materials.”

Archbishop Buechlein’s report prompted a long-running and wide-ranging review of catechetical materials used in religious education. The bishops’ Subcommittee on the Catechism met annually with religious publishers and set up an exhaustive voluntary review process to determine if texts were in conformity with the Catechism of the Catholic Church.

The memo accompanying the hymnal document acknowledged “over the years concerns have been raised regarding the lyrics of hymns and songs used in the liturgy that may be misleading or lacking in substance.”

“Given the power of music to reinforce the words that are sung by the people, great care must be taken to ensure the doctrinal integrity of the lyrics,” it said.

The first and lengthiest area of concern in the document focused on the presentation of eucharistic doctrine, reflecting a growing urgency among the bishops to address deficiencies in how some Catholics understand the Eucharist.

The document cited examples of current hymnody that fail to make the distinctions required.

The concern, the bishops said, is that “Catholics nurtured on a steady diet of certain hymns will learn from them that at Mass we come together to share bread and wine, which remain bread and wine, a common meal, even if under special circumstances.”

Further, “these hymns correspondingly also downplay or eliminate entirely reference to the sacrifice of Christ, his priesthood, and his status as both priest and victim, as well as to the role of the ministerial priesthood in the church.”

Regarding the doctrine of the Trinity, the report criticized hymns where there appeared to be a “reluctance to use the word ‘Father.’” Sometimes the word “Creator” is substituted for Father, although it applies to all three persons of the Trinity, and may imply that the Son and the Spirit are not God. “This is (the heresy of) Arianism, however unintentionally,” the report concluded.

The document concluded with an exhortation that “sacred song united to the words … forms a necessary or integral part of the solemn liturgy.”

“It is our hope,” added the bishops, “that this guidance will help ensure that all the sacred music employed in liturgical celebrations will achieve its purpose, which is the glory of God and the sanctification of the faithful.”