WASHINGTON, D.C. — Each year, on the Second Sunday of Easter, the Church celebrates the Sunday of Divine Mercy. On this day, Catholics contemplate the fullness of the Paschal Mystery — Christ’s Passion, death and resurrection.

The basis of the whole Easter Mystery is the merciful love of God. From the beginning of creation, throughout Scripture and most perfectly in the life, Passion, death and resurrection of his Son, Jesus, God is revealed as love itself. In that infinite love, God desires nothing more than to forgive our sins and offer His mercy.

The world’s need for the message of Divine Mercy took on new urgency in the 20th century. It was during this time that the world witnessed the rise of Nazism and communism and experienced the horrors of the world at war. Civilization was losing the understanding of the sanctity and inherent dignity of every human life. 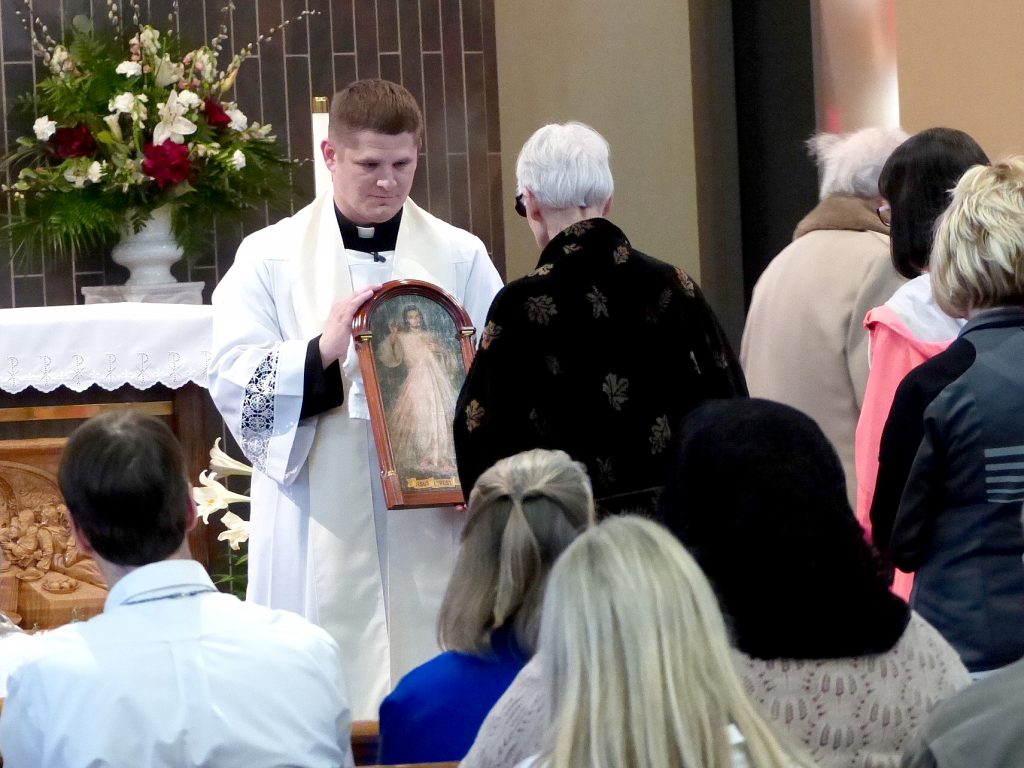 Bob List
During a prayer service on Divine Mercy Sunday last year at Sacred Heart Parish, Warsaw, those present were given an opportunity to venerate the Divine Mercy image individually. Father Jonathan Norton explained that the image was painted according to a vision of the Lord experienced by St. Faustina 89 years ago.

As these evil ideologies were taking shape, Jesus appeared to a humble Polish nun known as St. Maria Faustina Kowalska. As He continued to appear to St. Faustina, she recorded His messages to her in her diary. On one such occasion, Jesus said to St. Faustina:

“My daughter, tell the whole world about My inconceivable mercy. I desire that the Feast of Mercy be a refuge and shelter for all souls, and especially for poor sinners. On that day the very depths of My tender mercy are open. I pour out a whole ocean of graces upon those souls who approach the Fount of My Mercy.”

St. Faustina’s diary records 14 occasions when Jesus requested that a feast of mercy be observed. On May 5, 2000, five days after the canonization of St. Faustina, the Vatican decreed that the Second Sunday of Easter would henceforth be known as the Sunday of Divine Mercy.

In the Gospel reading for this Divine Mercy Sunday, we hear the story of Jesus’ appearance to the disciples after His death. Jesus comes to them and exposes the wounds of His hands and His side — the wounds He endured for our salvation. And as the resurrected Lord stood in their midst, the first words He spoke to them were, “Peace be with you.” (John 20:19)

Many of these disciples had abandoned Jesus during His Passion. During Christ’s moment of greatest need, they scattered, leaving Jesus alone in His sacrifice. Many might think what the disciples had done was unforgiveable. Yet Jesus appears to them and offers them His peace. And then He breathed on them and gave them the power to forgive sin, to extend His own mercy.

Now, Thomas was not present when Jesus appeared, and he refused to believe the disciples when they told him the Lord had appeared to them. Thomas needed to see to believe, and so Jesus returned and revealed himself eight days later, on the Octave of Easter. Jesus showed Thomas His hands and His side, saying, “do not be unbelieving, but believe.” This is also found in the Gospel reading for Divine Mercy Sunday, Verse 27.

How often have we doubted the Lord like Thomas? How often have we hidden in fear, unable to bear the shame of our mistakes and failures? What sins have we painfully buried in our hearts rather than exposing them to the healing light of God’s mercy? Have we failed to confess and seek reconciliation for sins of adultery, violence, hatred or participation in an abortion? Have we rejected the Church’s teachings on contraception, sexuality or marriage? Have we hardened our hearts, giving ourselves over to envy, greed or dishonesty?

When we enter the confessional and seek God’s forgiveness, in a way, Christ breathes on us as He did the disciples, wiping away our sins and offering us His peace.

Since the legalization of abortion in the United States, millions of women, men and families have been hurt by abortion. By the age of 45, as many as one in three women have had an abortion, and a similar number of men and family members have been involved. Many inaccurately believe that abortion is “the unforgivable sin.” They need to hear that God forgives every sin of a repentant heart, even the sin of abortion.

Project Rachel is the abortion-healing ministry of the Catholic Church in the United States. It is a diocesan-based network of specially trained priests, religious, therapists and laypersons who provide a team response of care for those suffering in the aftermath of abortion. In addition to referring for sacramental reconciliation, the ministry provides an integrated network of services, including pastoral counseling, spiritual directions, support groups, retreats and referrals to licensed mental health professionals. For more information contact the Diocese of Fort Wayne-South Bend Office of Family Ministry at 574-234-0687 or visit www.diocesefwsb.org/MarriageandFamily.

Information provided by the U.S. Conference of Catholic Bishops in the 2019-20 Respect Life Program.