Bishop Kevin C. Rhoades offered Mass on Thursday, Nov. 2, at Catholic Cemetery and blessed the newly constructed Divine Mercy Funeral Home on cemetery grounds. On Friday, special guests were invited to tour the facility, followed by tours for the general public on Saturday.

Ground was initially broken last February for the first Catholic funeral home in the Diocese of Fort Wayne-South Bend, in an event attended by local and diocesan dignitaries. Bishop Rhoades sprinkled holy water on the ground and invoked God’s blessing on the facility and its mission. He said at that time, “I am hopeful that this new ministry of the Catholic Cemetery Association will bear much good fruit in serving the Church’s mission of mercy.” That vision has come to fruition in a beautiful, stone-enhanced, 14,000-square-foot building topped with three gold crosses — representing the Holy Trinity — and interior appointments that represent Catholic faith and traditions. 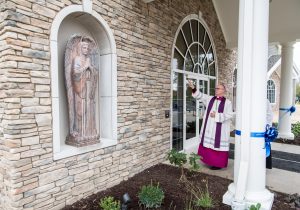 The beauty and richness of the Catholic faith is evident the moment one approaches the building and the two life-size stone angels who stand guard at its imposing entrance. A mosaic image of the Divine Mercy, created in Italy by artist Chris Botti and reconstructed on site, graces the foyer. Photographs of the altars from 17 area Catholic churches line the walls, and passages from Holy Scripture appear throughout the facility. 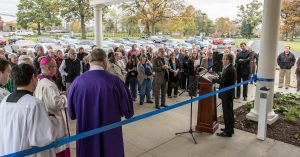 Executive director Casey Miller said, “We feel the magnitude of what we’ve done here” in constructing the first Catholic funeral home in the diocese. Its distinctly purposeful and powerful Catholic difference was approved by Bishop Rhoades and overseen by Father Dan Scheidt, pastor of St. Vincent de Paul Parish, Fort Wayne, who was appointed by the bishop to choose the Bible passages and select the funeral home’s interior appointments.

The funeral home features two spacious, light-infused visitation rooms, the St. Faustina Kowalska room and the St. John Paul II room. Each can accommodate a wake, vigil and rosary for the deceased, has an adjoining private family room and is decorated with glass-enclosed cabinets displaying liturgical artifacts on loan from Cathedral Museum. And each has beautiful, restful exterior views of the adjoining Catholic Cemetery grounds. 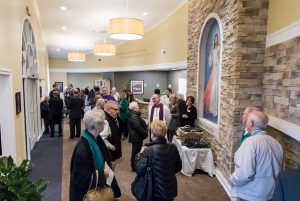 The facility contains administrative offices, a vesting room for priests with a small altar, a conference room for funeral planning, a selection room where families may choose caskets and vaults, as well as a crematorium and embalming facility. A plaque appears on the door of that room to remind workers of the reverence to be accorded the body in death. “It is the most sacred room in the building,” Miller pointed out. He was also quick to add that the funeral home will be used for visitation only, since the funeral Mass will always be held in the decedent’s parish church.

Divine Mercy Funeral Home will have an organist on site, as well as two licensed funeral directors, Bob Jesch and Monte Freeze.

“This funeral home is a gift from the diocese,” said managing director Jesch. Miller explained that because it is a nonprofit entity, “We, as Catholics, own this funeral home.” He added, “We have been diligent in keeping prices as low as possible … Families will be pleasantly surprised.” He also noted that pre-planning arrangements made elsewhere can be transferred to Divine Mercy. “That’s been the number one question.” 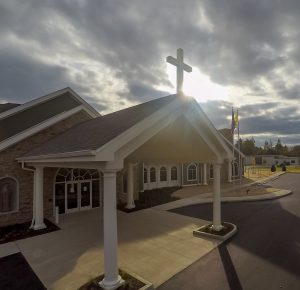 According to its mission statement, “Since 1873, it has been the sacred mission of Catholic Cemetery and now the Divine Mercy Funeral Home to bury the dead and care for those who mourn. As a nonprofit ministry in the Fort Wayne-South Bend diocese, we offer complete funeral and cemetery services in keeping with our Catholic faith. Because God created us in His own image and likeness, we show a deep respect for the dignity of the body, which is a temple of the Holy Spirit. When the time comes for you or a loved one to be with Our Lord, Divine Mercy Funeral Home and Catholic Cemetery will be there to comfort and serve your family, honorably fulfilling the corporal work of mercy of burying the dead and the spiritual work of mercy of comforting those who mourn.”

Miller expressed thankfulness for the assistance and support of the many who collaborated to make Divine Mercy Funeral Home a reality; primary among them, Bishop Rhoades. “Without his leadership and guidance, (this) would not have come to fruition. I also thank the priests, deacons and all of the leadership of the Diocese of Fort Wayne-South Bend, and Father Dan Scheidt … his contributions were vitally important to the mission of the funeral home.” 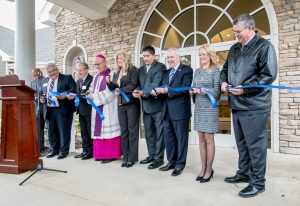 Mayor Tom Henry, Schenkel Construction and its workers and contactors, the professional staff and board of directors of Divine Mercy Funeral Home and Catholic Cemetery, and the Fort Wayne community were also among those for whom Miller voiced appreciation.

The response from visitors to the Saturday open house was very positive. Marlene and John Deisert, parishioners at St. Charles Borromeo, thought the facility was “excellent” and liked the artifacts. Teresa Walker admired the passages from sacred Scripture on the walls. Emma Momper noted the artwork, and its appropriateness to the name of the funeral home. “He died for us, and His mercy is there,” she said. JoElla and Don Gregg thought the facility was “absolutely beautiful,” with a pleasant and relaxing atmosphere.

Carol and Carl Herman have been watching progress on the facility and declared themselves “very impressed” with the end result. Cathedral parishioner Richard Wade said, “I’ve been wanting this for years. I’m very supportive. I’m spreading the word … everything is done properly and with reverence.”