Described in its mission statement as a “multi-racial faith community, rooted in the African-American tradition,” St. Augustine Church in South Bend was originally formed in the late 1920s as a parish dedicated to African-American Catholic evangelization and worship. The movement to build the church was led by Father George O’Connor, a Caucasian Holy Cross priest who was raised by African-American parents after his own family died tragically when a tornado ripped through their farm. 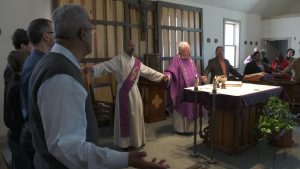 Between 1961 and 1972, during the height of the Civil Rights movement, Father Dan Piel served as the parish’s pastor. Father Piel is well-known for his work as chairman of the National Association for the Advancement of Colored People. Indiana University South Bend Heritage Center has referenced the parish as one with “a diverse congregation with a long-running commitment to human and civil rights.”

Today the parish is led by Father Leonard Collins, CSC, who has served as the pastor for nearly a decade.

“An interesting thing in my life is that, in 1968, I served as deacon at St. Augustine’s with Father Dan Piel and (I am) now just turning 75,” Father Collins said. “Isn’t there something about the circle being unbroken?” 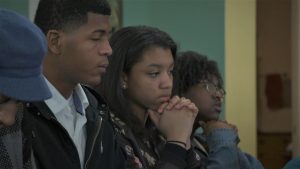 Deacon Mel Tardy also ministers to the parish. He is known for his dynamic preaching, leadership in youth ministry and creative community gatherings, including themed Bible studies.

“St. Augustine’s is truly a special parish,” Deacon Tardy said. “Not only for its unique black Catholic heritage and historic dedication to civil rights and interracial harmony, but also for its faithful devotion to God and community. I am humbled and inspired to serve this parish and our surrounding community alongside Father Len and our many servant leaders and volunteers.”

True to the parish’s roots, the choir focuses on gospel music. St. Augustine’s website reads, “The choir has in the past, as well as currently, delivered a soulful sound as traditional gospel songs are sung, as well as current selections.”

This focus has made this vibrant and uplifting music a signature of the parish. Many of the songs are reminders of how God walks his people through their struggles.

“We are blessed to have our gospel choir of gifted musicians adding so much to our heritage of African-American culture,” Father Collins said.

St. Augustine is active in the surrounding community. It supports St. Vincent and has set up its own independent soup kitchen that serves lunch to those in need three days out of the week.

“Our many volunteers in the soup kitchen and the St. Vincent de Paul Society continue to help the neighborhood,” Father Collins said.

The parish also hosts coffee after Sunday Mass as a way to offer an opportunity for parish members to enjoy each other’s company.

“Eating while sharing fellowship after each Mass at coffee is another community-building activity,” Father Collins said.

The Tolton Society is another of the ministries hosted by St. Augustine. The society is named after Father Augustus Tolton, a former African-American slave who later became the first recognized black priest in the U.S.

“Father Tolton is known for his dedicated service to poor, oppressed blacks on the streets of Chicago and for breaking down the racial barrier for African-Americans to become priests; but really, he inspired and evangelized many whites, too,” Annie Tardy, president of the society, said. “The society seeks to honor and continue this broad legacy of Father Tolton and to promote his worthy cause for canonization to sainthood.”

One can attend this diverse parish of 130 families for Mass each Sunday at 8:15 a.m., which is a cantored Mass, and at 10:30 a.m., at which time the gospel choir accompanies the liturgy.

Reconciliation: after Mass or by appointment