WASHINGTON (CNS) — The disappointment of not being able to celebrate Easter Mass in churches across the country this year might have been most strongly felt by the thousands who planned to join the Catholic Church at the Easter Vigil.

The vigil Mass — which starts in darkness and is brightened by an outdoor flame that spreads to the Paschal candle and individual candles — is rich in liturgical symbols about darkness and light, doubt and faith, old life and new. It highlights not only the resurrection of Jesus but the new life experienced by believers that is visually demonstrated by the baptism of those joining the Church.

This year, amid the coronavirus pandemic and state restrictions to curb the disease’s spread that prevent gatherings of 10 or more, Catholic churches in the United States have been closed for public Masses. Many parishes and dioceses are livestreaming their services with simply the celebrant and maybe a lector or cantor present.

As this has been the new normal for parishes across the country, RCIA coordinators and diocesan leaders realized in late March that they would very likely have to postpone rites of initiation. Many started setting their sights on Pentecost, which is May 31, but they also have said no date can be set, obviously, because no one can predict when churches will reopen.

“It is very disappointing to be in this process for a long time and have the finish line in sight, and now the line has been moved,” said Sara Blauvelt, director of catechesis for the Archdiocese of Washington. “It’s hard not to be discouraged, but we have to remember there is great hope in Christ, and that is what we have to cling to.” 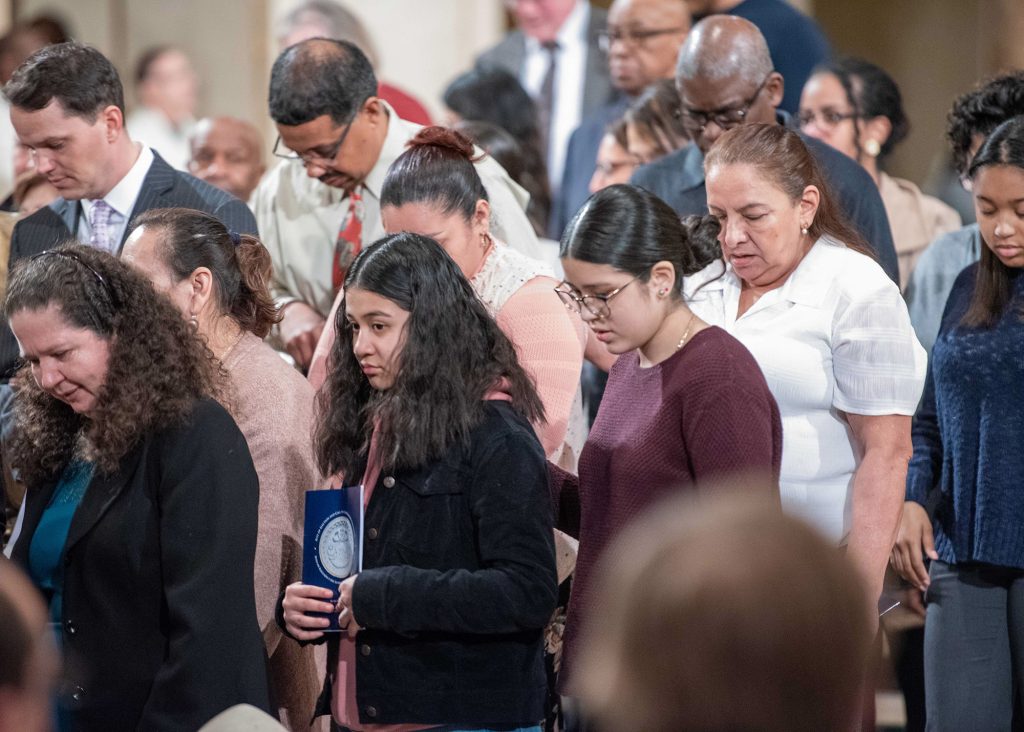 People at the Basilica of the National Shrine of the Immaculate Conception in Washington participate in the Rite of Election and Call to Continuing Conversion March 1, 2020. (CNS photo/Mihoko Owada, Catholic Standard)

As far as a rescheduled date, she too is hoping for Pentecost but said: “We can’t promise anything at this point other than to promise they will receive the sacraments when it is the right time.” She said this is a sad time for the Church, but she also believes “new life will come after the pandemic, and new life in Christ will come for our candidates and elect.”

That’s the hope of Dustin Pollock, who planned to join the Church and receive sacraments of initiation at St. Rose of Lima Church in Layton, Utah, this Easter.

Pollock’s parents were baptized in The Church of Jesus Christ of Latter-day Saints, but they did not practice the faith, and he grew up without any religion. He found the Catholic Church through his second wife, who is a practicing Catholic. After attending Mass with her, initially so she wouldn’t have to go alone, the faith began to mean something to him personally and he started the RCIA process.

In recent weeks, he and his wife have been watching Masses online, but they are looking forward to the day when they can go to Mass in person and receive the Eucharist together. For now, Pollack said he is determined to wait and “stay in touch with the Lord through prayer and meditation, but it’s hard.”

As a service provider at a tire store, Pollock is performing essential work and as such still goes in every day and interacts with many people. Not knowing if he is unintentionally being exposed to the virus is difficult.

“Silently, in my head, I am constantly praying,” he said. “It’s so stressful every day; if I didn’t have my faith, I would be going crazy. I couldn’t make it through without it.”

“I definitely look forward to moving forward in this. I will forever be in this faith,” he added.

And in this waiting period, candidates and catechumens have been encouraged to keep up with the faith they’ve been studying and discussing for weeks via Zoom conference calls and Google hangouts.

Michael Bayer, director of evangelization and adult formation at St. Clement Catholic Church in Chicago, said that since the parish has finished all of its RCIA formation classes, program leaders are encouraging participants to become involved in broader parish ministries, even though for now these ministries are all virtual, such as couples groups or weekly Bible studies.

He said the RCIA participants are very understanding. “Several work in health care, including a couple of nurses, so people certainly comprehend the gravity of what we are facing with the coronavirus threat.”

Sister Rosanne Belpedio, a Sister of St. Joseph of Carondelet, who is director of the Office of Worship for the Los Angeles Archdiocese, said the pandemic similarly challenges the faith of those in the Church and those waiting to be a part of it.

She has encouraged RCIA directors not to lose momentum and to urge participants to reflect on what they are going through by asking: “Where is God acting in my life in this unusual circumstance?” and also “What do these times require of me?”

“We don’t know what life will be like” after restrictions are lifted, she said, but she also said the Church can’t lose sight of this opportunity to deepen faith and to bring the community together, reminding everyone of their obligations to one another.

The faith lessons learned now will certainly carry over for those who have started their journey to the Church in this unexpected year. In the Los Angeles archdiocese alone, there are more than 1,600 catechumens and nearly the same number of candidates.

In the meantime, Blauvelt, from the Washington archdiocese, said the whole Church should be disappointed about the delay in welcoming new members.

“Every parish is enriched by new family members. Every time someone joins the faith — comes to Christ in the Catholic Church — we are richer. So, we are impoverished as we wait with them,” she said, adding: “We are serious about welcoming them.”

Contributing to this story was Richard Szczepanowski, managing editor of the Catholic Standard, newspaper of the Archdiocese of Washington, and Linda Petersen, a reporter for the Intermountain Catholic, newspaper of the Diocese of Salt Lake City.