(CNS) — Patrick Raglow and the resettlement staff at Catholic Charities of the Archdiocese of Oklahoma City expect to be very busy very soon.

They are preparing to welcome to Oklahoma 1,800 Afghans who were part of the emergency evacuation in August as the Taliban regained control of Afghanistan’s government.

“We expect a trickle by the end of the month (September) and then a more rapid flow of people the remainder of the year,” Raglow, the agency’s executive director, told Catholic News Service.

The program had been expecting to welcome Afghans transported to the U.S. who are classified as Special Immigrant Visa holders for weeks, but not quite so many at first. Originally, he said, the agency was preparing for 720 people.

After an appeal from Oklahoma’s Republican Gov. Kevin Stitt to agencies throughout the state, Raglow brought the staff together and they agreed to more than double how many Afghans they could welcome.

The number represents 40% of the 7,500 people Migration and Refugee Services of the U.S. Conference of Catholic Bishops has been contracted by the State Department to resettle. 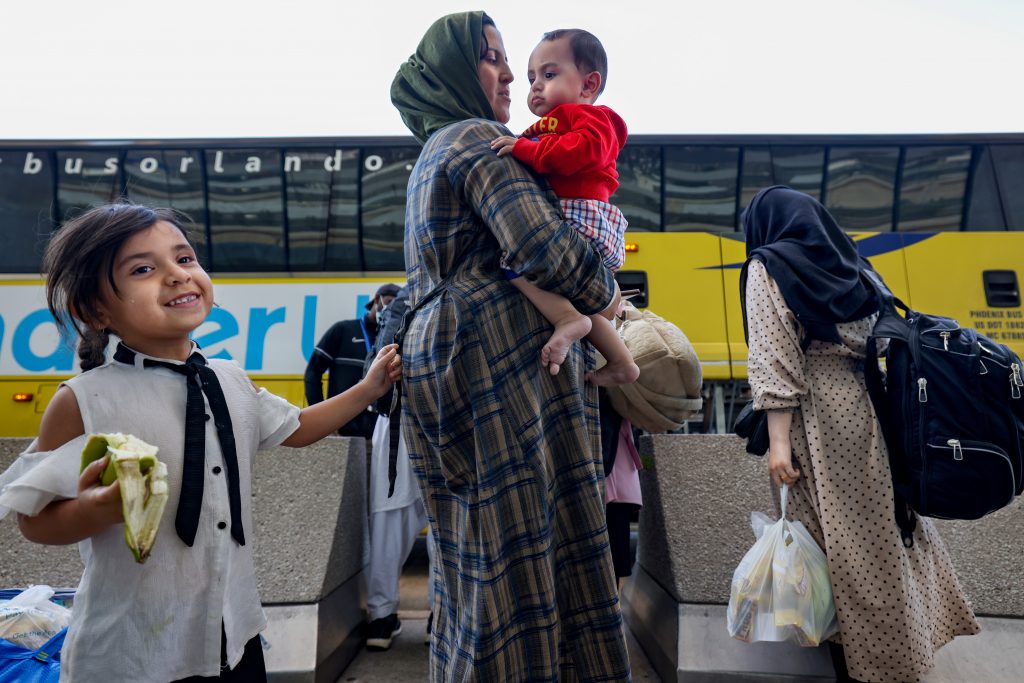 Afghan refugees at Dulles International Airport in Dulles, Va., board buses Sept. 2, 2021, that will take them to a processing center. (CNS photo/Evelyn Hockstein, Reuters)

Interpreters and other civilians who worked for the U.S. government or NATO can get the special visa under a program created in 2009 and modeled after a similar program for Iraqis.

More than 25,000 Afghans had arrived in the U.S. by Sept. 3, Air Force Gen. Glen VanHerck, who heads U.S. Northern Command, told reporters. He said the country has the capacity to take in twice that many.

The evacuees have been sent to eight military bases around the country where they are receiving medical screening. Workers also are processing them and preparing them for travel to dozens of communities nationwide.

In Oklahoma, plans call for resettling about 800 people in the Tulsa area and about 1,000 around Oklahoma City.

Raglow said the commitment is large compared with a typical year before the Trump administration reduced refugee admissions to record low levels. An average year prior to 2017 would find the agency resettling between 180 and 260 people, he said.

“It’s going to be a big effort. There’s a lot of local support. It’s a lot of volunteers. It’s a lot of donations. Our offices around the U.S. are really thinking creatively and engaging with this huge groundswell of interest to welcome this population,” she told CNS.

The first people with a Special Immigrant Visa were expected to arrive in places such as Oklahoma City, Jefferson City, Missouri, and Cleveland in mid-September.

In Jefferson City, planning to receive evacuees dovetailed with Catholic Charities of Central and Northern Missouri’s effort to begin ramping up to receive more refugees under the Biden administration’s plan to expand resettlement efforts.

“We’re working hard to build up a community co-sponsorship program,” he explained. “We’re working with other faith communities, business partners, other nonprofits interested in stepping up to the plate and taking on a family or an individual or multiple families.”

The agency is preparing to welcome up to 300 evacuees.

Among people hired to aid the effort are two Afghan natives, a man and a woman who speak Dari and Pashto, the predominant languages in Afghanistan, Lester said.

“We know when we bring folks into communities where they’re going to be welcomed, and the community brings their arms around them, that’s when we’re going to be successful,” he told CNS.

In the Cleveland diocese, Migration and Refugees Services of Catholic Charities already has been working with three people with special visas who arrived before the full-scale evacuation began.

Thomas Mrosko, MRS director for the diocese, said he and his colleagues are preparing to welcome about 100 of the 300 Afghans expected to arrive in Northeast Ohio. Two other agencies, each handling about 100 people, are involved as well.

“It’s going to start out slow and then pick up,” he said.

The plan, as it is elsewhere, is to connect the Afghans with friends or family members locally when possible. Otherwise, Mrosko has seen “an outpouring of folks who have offered to sponsor them or live for free.”

Sponsors will help them get settled and take them to job interviews or doctor’s appointments and may help provide rent payments. There are others helping the refugees who are not sponsors but are offering them apartments rent free.

When evacuees arrive in Oklahoma City, they will be placed in hotels at first and connected in a central location with social workers, translators and others who can help them connect with schools, doctors and jobs, and assist with cultural orientation.

Finding employment will be a major emphasis, Raglow said.

“The vast majority, they have suffered trauma,” Raglow told CNS. “They’d rather be in a safe secure, thriving Afghanistan, but they will recognize the opportunities here in Oklahoma and I think they’ll make a major contribution to our community.”