The Sept. 13 disclosure that the preserved remains of over 2,200 aborted babies had been found at the rural Illinois home of the recently deceased Indiana abortionist Ulrich “George” Klopfer has sparked outrage and demands for immediate investigations by authorities.

That same day, Hill issued this statement: “The grisly discovery of these fetal remains at the Illinois home of a deceased abortion doctor shocks the conscience. Further, we have reason to believe there is an Indiana connection to these remains. This past weekend, I conferred with Illinois Attorney General Kwame Raoul, and he and I have agreed to work together as my office coordinates an investigation.”

Klopfer was 75 when he died Sept. 3. He had performed abortions in Indiana since the 1970s but had his medical license revoked in 2016 after innumerable infractions over the years.

Pro-life volunteers at the South Bend event said they had observed Klopfer carrying out boxes from that building and placing them in his car on numerous occasions, even after he was ordered to cease doing abortions. Lynne Scherschel, vice president of Lake County Right to Life, reported the same incidents at Klopfer’s Gary facility. 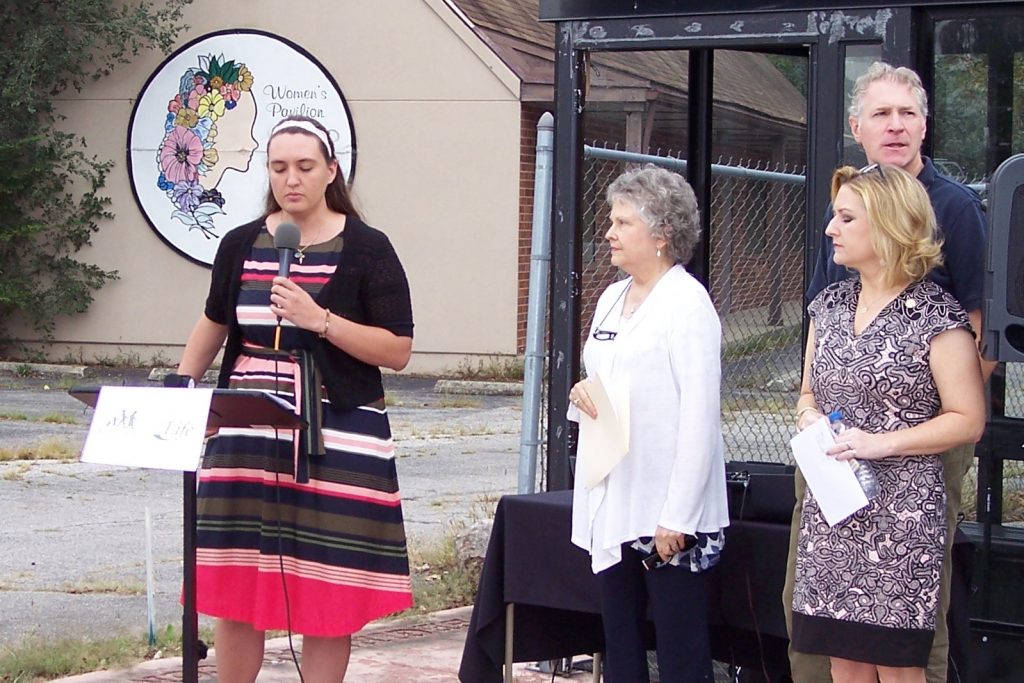 Pro-life advocates in the Diocese of Fort Wayne-South Bend ask for a search warrant to determine if more fetal remains are in the building in South Bend used for Ulrich Klopfer’s abortion business. Among the speakers at the South Bend press conference were, from left, Jackie Appleman, executive director of St. Joseph County Right to Life; Lynne Scherschel, vice-president of Lake County Right to Life; State Rep. Christy Stutzman; and Eric Scheidler, executive director of Pro-Life Action League.

Speaking at the South Bend gathering, executive director of St. Joseph County Right to Life Jackie Appleman said that Klopfer had “committed” more than 30,000 abortions. She called for authorities to search Klopfer’s three Indiana facilities to ensure that all the human remains are found and given proper burial, noting that women have been reaching out to Right to Life, fearful their babies have been stored in Klopfer’s garage.

Appleman also asked for an investigation into whether former employees of Klopfer were complicit in storing, hiding or selling the remains of aborted babies.

An Indiana law requiring burial or cremation of aborted human remains was passed by the Indiana legislature in 2016 but delayed by legal challenges until the U.S. Supreme Court upheld the law in May of this year. Even before that law went into effect, Klopfer’s actions violated Indiana medical waste laws, according to Steven Aden, chief legal officer of Americans United for Life. 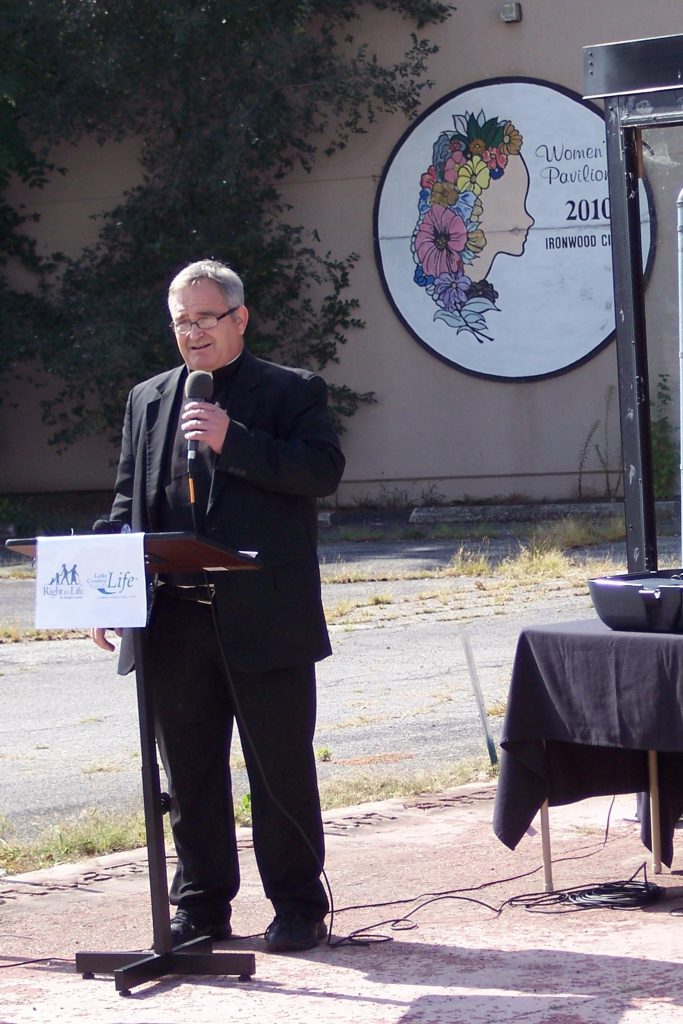 Father Glenn Kohrman, pastor of Holy Family and St. John the Baptist Parishes in South Bend and a board member of Catholic Charities of the Diocese of Fort Wayne-South Bend, urges respect for all human life and offered the assistance of Catholic Charities to any woman struggling to bring her pregnancy to term during a press conference Sept. 17.

Father Glenn Kohrman, pastor of South Bend’s Holy Family and St. John the Baptist parishes, said at the South Bend press conference that our culture’s greatest need is “reverence for each other.” He noted that “children are alive before they take their first breath, they really are: statistically, scientifically, all the rest.”

Father Kohrman did not use a name, but he appeared to be refuting comments by South Bend Mayor Pete Buttigieg, a presidential candidate who recently attempted to justify his support for abortion rights by claiming that the Bible says life does not begin until a person breathes.

Father Kohrman, who also serves on the board of Catholic Charities, stressed that any woman who needs assistance in carrying her pregnancy to term will be helped by that organization.

Another speaker, Lisa Everett, director of Project Rachel for the Diocese of Fort Wayne-South Bend, offered assistance in healing to any post-abortive woman or man through the Project Rachel confidential network of trained counselors, priests and companions. 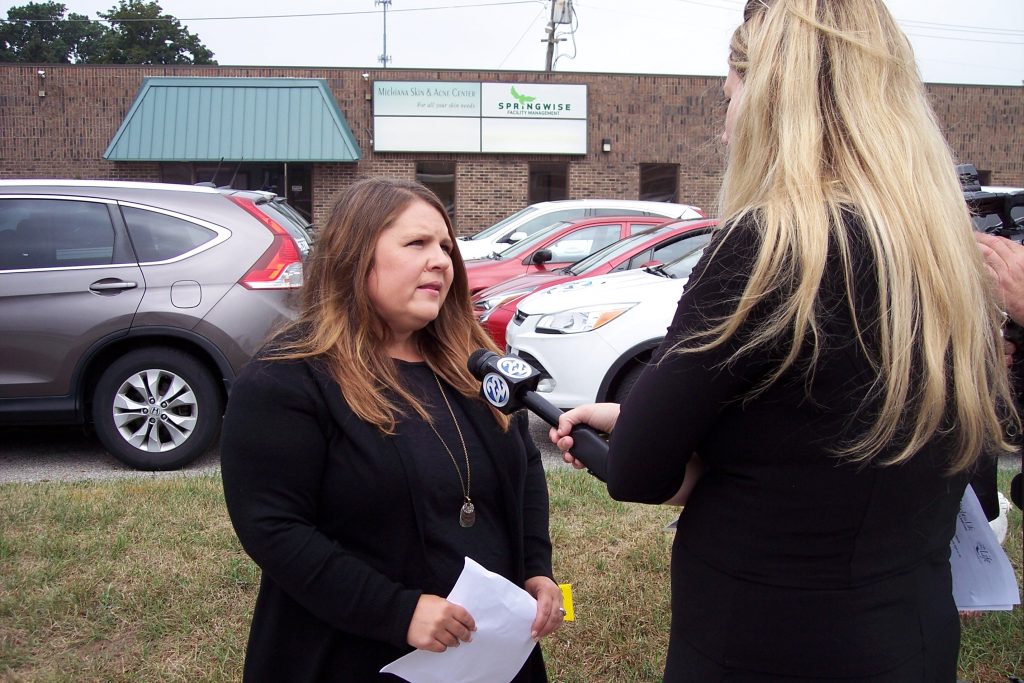 Serena Dyksen shares the traumatic story of her abortion at age 13, following rape by an uncle, at a press conference in South Bend Sept. 17.

Perhaps the most moving testimony at both press conferences came from Serena Dyksen of Elkhart. She related her experience of abortion by Klopfer when she was only 13, the victim of rape by an uncle. She said she did not even know what abortion was and went through with it “out of innocence and trusting that adults had my best interest in mind.”

She depicted Klopfer as cold and uncaring, and when she cried out in pain, his reaction was to “yell” at her to be quiet. Dyksen related she suffered physical repercussions and debilitating emotional pain that lasted for years until she began the healing process after an “encounter” with Jesus.

“Even after much healing and attending a post-abortive retreat, hearing the news of over 2,000 baby remains on George Klopfer’s property stirred up so many emotions — not only for me but many women reaching out to me. I feel like I have been violated all over again,” she related.

Dyksen said she wants a full investigation to be done and for the babies to have a proper burial. She is working with attorneys to sue Klopfer’s estate to obtain DNA testing to determine if her child is one of the babies found.

The county Right to Life groups have been in contact with local prosecutors about plans for an investigation and have learned that prosecutors are coordinating with the Indiana attorney general to determine how to proceed. 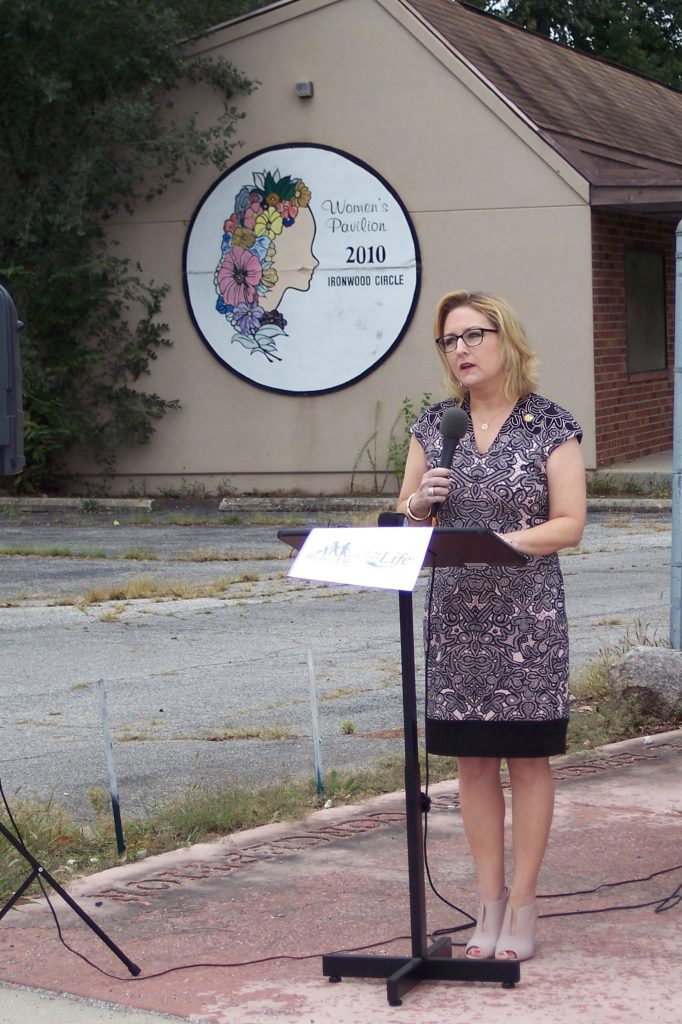