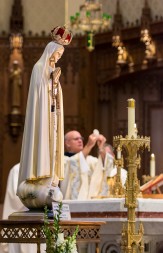 Mass was celebrated by Bishop Kevin C. Rhoades Saturday morning, Oct. 1, at the Cathedral of the Immaculate Conception, downtown Fort Wayne, on the occasion of the annual Mass and breakfast of the World Apostolate of Fatima, Diocese of Fort Wayne-South Bend division.

On Saturday, Oct 1, nearly 400 members and supporters of the World Apostolate of Fatima attended an annual breakfast meeting at the Grand Wayne Center in downtown Fort Wayne. The World Apostolate of Fatima is a public, international association of the faithful under The Pontifical Council for the Laity. Its mission is to learn, live and spread the Fatima message in full communion with the Church.

The day began with Mass at the Cathedral of the Immaculate Conception, celebrated by Bishop Kevin C. Rhoades with concelebrant and homilist Father Glenn Kohrman. Father Ben Mulenkamp and Father Adam Schmitt also concelebrated Mass. A statue of Our Lady of Fatima, which is being transported throughout the country on its Fatima Centennial U.S. Tour for Peace, accompanied by its custodian, Patrick Sabat, was prominently displayed during the Mass. At its conclusion, the statue was carried in a Marian procession to the meeting site by a group of Franciscan friars, accompanied by three costumed children depicting Lucia, Jacinta and Francisco — to whom Our Lady appeared at Fatima — and the cadre of the Apostolate faithful.

Apostolate President Mariam Schmitz said that the organization has “grown by leaps and bounds” recently, primarily as a result of Bishop Rhoades’ consecrating the Fort Wayne-South Bend diocese to Mary in 2014.

“That was a catapult to growth…. People are eager to learn more about the Fatima message,” she added. The group’s primary outreach this year is to the youth of the diocese, with junior high school retreats enriched by Franciscan Father David Mary Engo’s “joyful way of teaching about Fatima.”

Attendee Ed Dahm professed a special love for the Blessed Mother, and noted that devotion to her is “more prevalent today.” Member Shelly Tippmann, said, “I’ve always prayed to her. I trust that (Fatima) message. David Carollo, executive director of the New Jersey-based organization who was also in attendance, said of the Fort Wayne-South Bend diocese, “This is a very fine division of our Apostolate.” Next year, the centennial of the 1917 apparition of Our Lady of Fatima, will see special diocesan events take place in commemoration of that occurrence, the highlight of which will be a pilgrimage to Spain and Portugal in July, hosted by Bishop Rhoades himself.

Keynote speaker for the World Apostolate of Fatima meeting was Bishop Rhoades, who said that he anticipates this will be an opportunity for much spiritual growth in our diocese.

“You may recall the third part of the secret of Fatima that Pope John Paul revealed in the Jubilee Year 2000. Sister Lucia described a bishop dressed in white whom, she said, she and the other children believed was the Holy Father,” he said to those present. “This bishop was followed by other bishops, priests, men and women religious, and men and women of different ranks and social positions. They were walking up a mountain through a city that lay in ruins, and atop the mountain stood the cross. This all symbolized the human history and so much destruction, yet moving toward salvation, moving toward the cross, the goal and guide of history. Amid all the horrors around them, the bishop dressed in white and the others made their way through the ruins of the city, among the corpses of the dead. This is the path of the Church as it journeys through a time of violence, destruction and persecution.

“This especially reminds us of the 20th century, the destructive world wars and the persecution of the Church. Sadly, these things continue in the 21st century. Pope Benedict XVI, when he was still a cardinal … wrote a profound commentary on the third secret. He describes this vision in the third secret as the Via Crucis (the way of the cross) of an entire century. He wrote: ‘In the Via Crucis of an entire century, the figure of the pope has a special role. In his arduous ascent of the mountain we can undoubtedly see a convergence of different popes. Beginning from Pius X up to the present pope (John Paul II), they all shared the sufferings of the century and strove to go forward through all the anguish along the path that leads to the cross. In the vision, the pope too is killed with the martyrs. When, after the attempted assassination on May 13, 1981, the Holy Father had the text of the third part of the ‘secret’ brought to him, was it not inevitable that he should see in it his own fate? He had been very close to death, and he himself explained his survival in the following words, ‘It was a mother’s hand that guided the bullet’s path…. That ‘a mother’s hand’ had deflected the fateful bullet only shows once more that there is no immutable destiny, that faith and prayer are forces that can influence history and that in the end, prayer is more powerful than bullets and faith more powerful than armies.

“For decades, people wondered what the content of the third part of the secret might be. … Actually (it) belongs to the whole of the Fatima message: the importance of prayer as the path to salvation as well as the summons to penance and conversion. Approved private revelations, like Fatima, can, in the words of Cardinal Ratizinger, ‘help us to understand the signs of the times and to respond to them rightly in faith.’”

The bishop clarified that what the children experienced in the apparitions was an interior vision. Cardinal Ratzinger called this “interior perception.” Cardinal Ratzinger continues, “Interior vision does not mean fantasy, which would be no more than an expression of the subjective imagination. It means rather that the soul is touched by something real, even if beyond the senses.”

Bishop Rhoades continued, “In the course of the centennial year, we will have the opportunity to consider more closely the six apparitions and the messages. I would like, therefore, to look at the whole, the central messages. … The Fatima message involves a truth and a call that the Church has always taught, the truth and the call of the Gospel itself. In its basic nucleus, it is a call to conversion and repentance. … Convert and repent! Everything about Fatima is linked to this call of the Gospel.” Further, he said, “The Fatima message is a message of love. Mary’s immaculate heart is full of love for her children.”

“When we think of the world today, we can feel almost overcome by the evil around us, wars, terrorism, violence, abortion, euthanasia, physician-assisted suicide, abandoned refugees, the crisis of marriage and the family, the persecution of Christians, threats to our religious liberty, atheism, militant secularism, relativism — the list goes on.” Bishop Rhoades continued, “This message of Fatima, the message of the Gospel, is addressed to us today. Our Mother reaches out to us who live in a culture where there is a collapse of morality, resulting in so much suffering, which brings so many dangers, including right here in our own country. … She revealed to the children that her Immaculate Heart will triumph. We don’t know exactly how that will happen, but it must begin with each one of us, in our own hearts, our own conversion from sin, our own repentance, our own prayer and sacrifices, just as Mary asked for these things from the shepherd children in their own lives.”

“So that’s Fatima; that’s the Gospel: penance, conversion and growth in faith, hope and love. … That’s the way to salvation,” said Bishop Rhoades. Our Lady pointed out the connection to prayer when she requested that the children pray the rosary daily, a plea she repeated in all six of her apparitions at Fatima.

Bishop Rhoades elaborated on the three angel apparitions which occurred a full year before that of Our Lady of Fatima. “The word angel means messenger,” he said. “In the Scriptures, we read about the angels who were messengers sent by God to prepare His people. At Fatima, an angel calling himself the Angel of Peace visited the three children to prepare them for what was to come.” Sister Lucia later described in her memoirs a young man, whiter than snow, transparent as crystal and of great beauty, who appeared to them in the spring of 1916. This angel of peace taught the children the Pardon Prayer, which they were to pray for the salvation of souls. The angel appeared to them a second time in the summer of 1916. He told them to pray and to offer sacrifices constantly to the Most High. After that, the children became especially devoted to prayer. The third apparition of the angel occurred in early September or October of 1916, when he held a chalice with the Eucharistic host above it, knelt beside the children and taught them the Fatima Angel’s Prayer. After giving the consecrated host to Lucia and the chalice to Jacinto and Francisco, the angel left them, for his mission was complete. He had prepared them to meet Our Lady.

Bishop Rhoades summed up his remarks by saying, “These three appearances of the angel are a good reflection for us as we approach the centenary celebration. They remind us of the importance of prayer, of reparation, and of reverence for the Eucharist, both Holy Communion and adoration of the Blessed Sacrament. … I invite you to think about these three apparitions and to pray the two prayers the angel taught the children between now and May 13. In our diocesan pilgrimage to Fatima next July, we will visit the two sites of these three angel apparitions.”

In closing, the bishop said, “We will have many opportunities in the year ahead to reflect on the events and message of Fatima. These are opportunities for ongoing conversion and repentance, for growth in our prayer life and for growth in the virtues of faith, hope and love. Our Lady, our spiritual mother, guides us and helps us … we must never give up hope in the promise that in the end Mary’s Immaculate Heart will triumph. … The message of Fatima invites us to trust in this promise.”