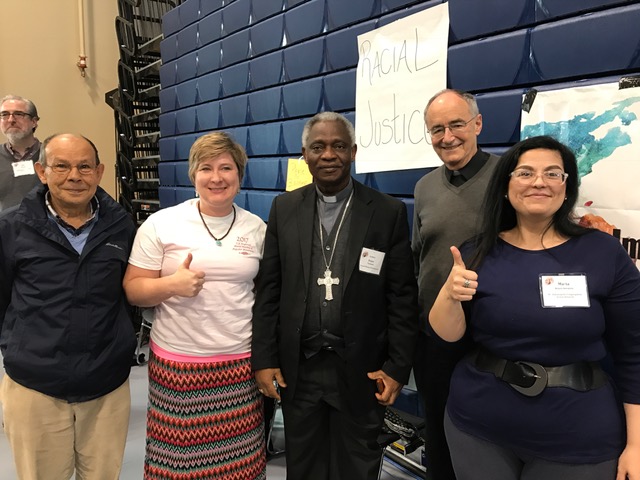 Local faith leaders participated in the first U.S. convening of the World Meeting of Popular Movements Feb. 16-19. Representatives of the Diocese of Fort Wayne-South Bend traveled to Modesto, Calif., to participate in the historic gathering of faith and social justice movement leaders organized by the Vatican’s department for Integral Human Development, the Catholic Campaign for Human Development, of the U.S. Conference of Catholic Bishops and PICO National Network, the largest network of faith-based organizing groups in the nation. The event brought together hundreds of people from various cultures and communities from across the world.

As a pastor of a bilingual, urban parish, Father Kevin Bauman of Our Lady of Hungary Church in South Bend went to the meeting to learn how to empower and protect the families of his community to live into their fullest dignity in the years ahead — and also shepherd the moral conscience of the broader faith community,” he said.

The Modesto meeting was the first U.S. regional convening organized in conjunction with three international meetings that took place in Rome in October 2014 and November 2016, and in Bolivia in July 2015. The purpose of each was for grassroots groups to push for workers’ rights, housing and environmental justice, as well as deepen relationships among these organizations and the faith community.

Audrey Davis, coordinator of social justice ministries for the diocese, found the most profound calls to action and highlights from the Modesto gathering to be Pope Francis’ opening letter, and an address given by Cardinal Joseph Tobin of the Diocese of Newark, N.J. Father John Korecsmar, CSC, agreed.

“‘Gaudium et Spes’ begins, ‘The joys and the hopes, the griefs and the anxieties of the men of this age, especially those who are poor or in any way afflicted, these are the joys and hopes, the griefs and anxieties of the followers of Christ.’ It is important for us as individual Catholics and as Church to respond to the specific situation of each time and place. The World Meeting of Popular Movements provided a clear description of the context of our ministries and response to the needs of people today. 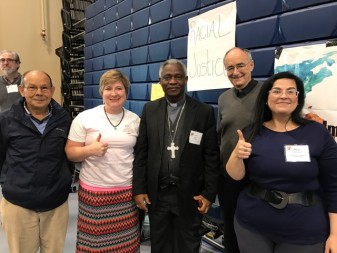 “Cardinal Tobin reminded us of what Pope Francis calls the “economy of exclusion,” he continued. “There are many vulnerable people who suffer great need and who must be cared for and protected. We need the light of the Gospel and its values to see our way through these dark times of fear and exclusion.”

Participant George Del Corral was inspired to see so many people responding to the issues of migration, racism, unemployment, and lack of housing, and by “hearing so many profound and heart wrenching words that dig deep into our core being.” … All of this is itself impressive, and gave me a sense of the surreal and of the importance of words and actions when they go together.

“For us from Northeast Indiana, we came to see what we could learn to take our fledgling efforts a step further and to build relationships with other organizations… what most inspired me was the great level of leadership that can be achieved in our families, churches and dioceses.”

Attendee Theresa Driscoll, a longtime director of religious education in the diocese and a Catholic publishing professional, thought the conference was by far the most intensive and challenging experience she had ever had.

“While I became much more aware of the depth of the problems our world is facing, I was also filled in a new way with hope and the conviction that there is much that can to done to address these issues on whatever level a person might want to start. Once we break through the walls of indifference that can so easily separate us from others, it’s a small step to become aware of what needs to be changed,” she said. “While the way forward demands critical examination of the problem, the possibilities for action are almost limitless. If our heart is moved by compassion and the desire to make a difference, God’s Spirit can take even our smallest efforts and create something good. The people I met at this conference are living proof of it.”