More than 1,300 students from the Diocese of Fort Wayne-South Bend marched with hundreds of thousands of others at the national March for Life in Washington, D.C., Jan. 24. Several of the marchers came from smaller parishes in the diocese.

Olivia Eagan of Immaculate Conception Parish, Auburn, was one of the students.

“In truth,” she continued, “empowerment is actually embracing the idea that women have the ability to bring life into the world. Attending the march this year was an incredible way to experience the immense joy that life brings to those who are open to it.”

The students arrived early Friday morning to celebrate Mass at Capital One Arena with a reported 20,000 other Catholics from across the nation. 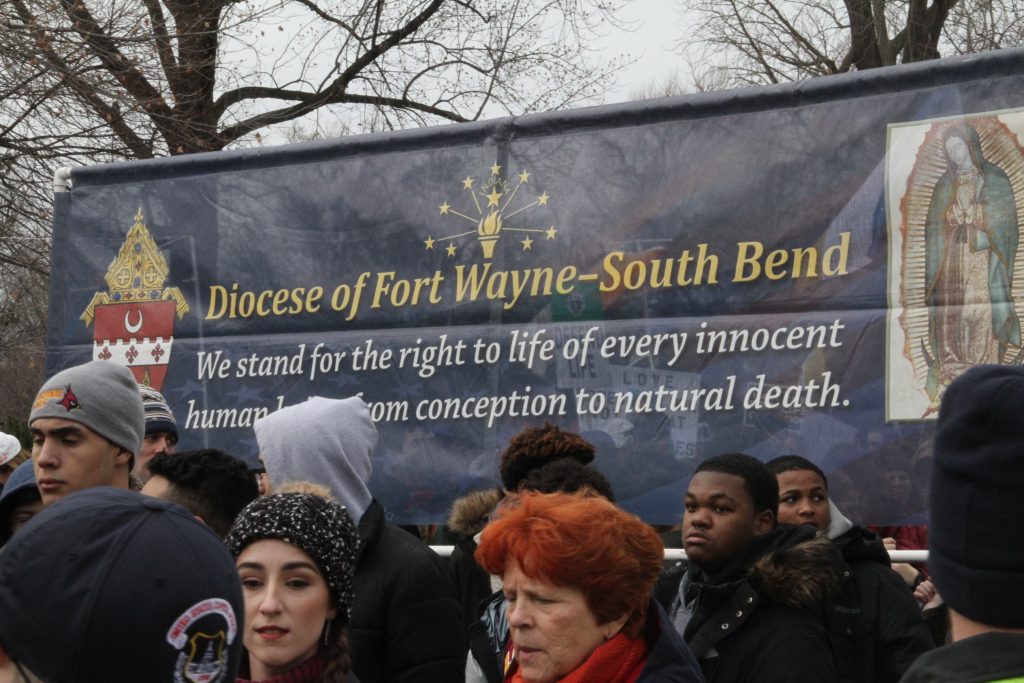 Photos by Joshua Schipper
Members of the Diocese of Fort Wayne-South Bend contingent walk before a banner stating their pro-life conviction Jan. 24 at the National March for Life.

During the homily, a priest from Rome, Italy, preached about the gift of life.

“I can’t tell you how happy I am to be with you here today in this assembly to do the one thing that has blessed me,” he said. “To give thanks for the gift that has enabled us to have all sorts of experiences in our life.”

Following the conclusion of Mass, the Diocese of Fort Wayne-South Bend marchers walked to the National Mall, where they joined the other pro-life supporters. Several students from the diocese held signs that read, “I am the pro-life generation.” 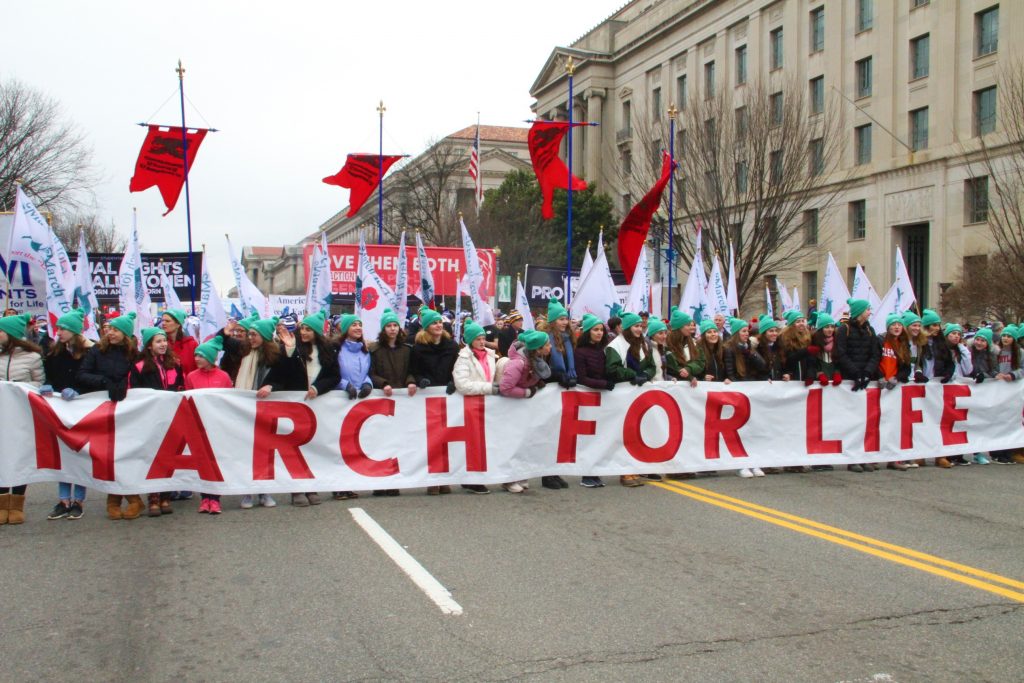 The March for Life banner, held by dozens of young women, seemed to represent the theme of the march: “Pro-life is Pro-Woman.”

While most arrived too late to hear President Donald Trump address the crowd, they heard from several pro-life Republican and Democratic state lawmakers, as well as Rep. Stephen Scalise, R-La. They also heard from individuals who survived abortion attempts.

Finally, they began to march down Constitution Avenue toward the Supreme Court building. The diocesan delegation was easily recognized within the thousands by their red scarves.

Students held a diocesan banner that summarized the Catholic stance of the issue of life over the crowd.

“We stand for the right to life of every innocent human being from conception to natural death,” it read. To the left of the declaration, an image of Our Lady of Guadalupe was present as an outward sign of the students’ Catholic identity. 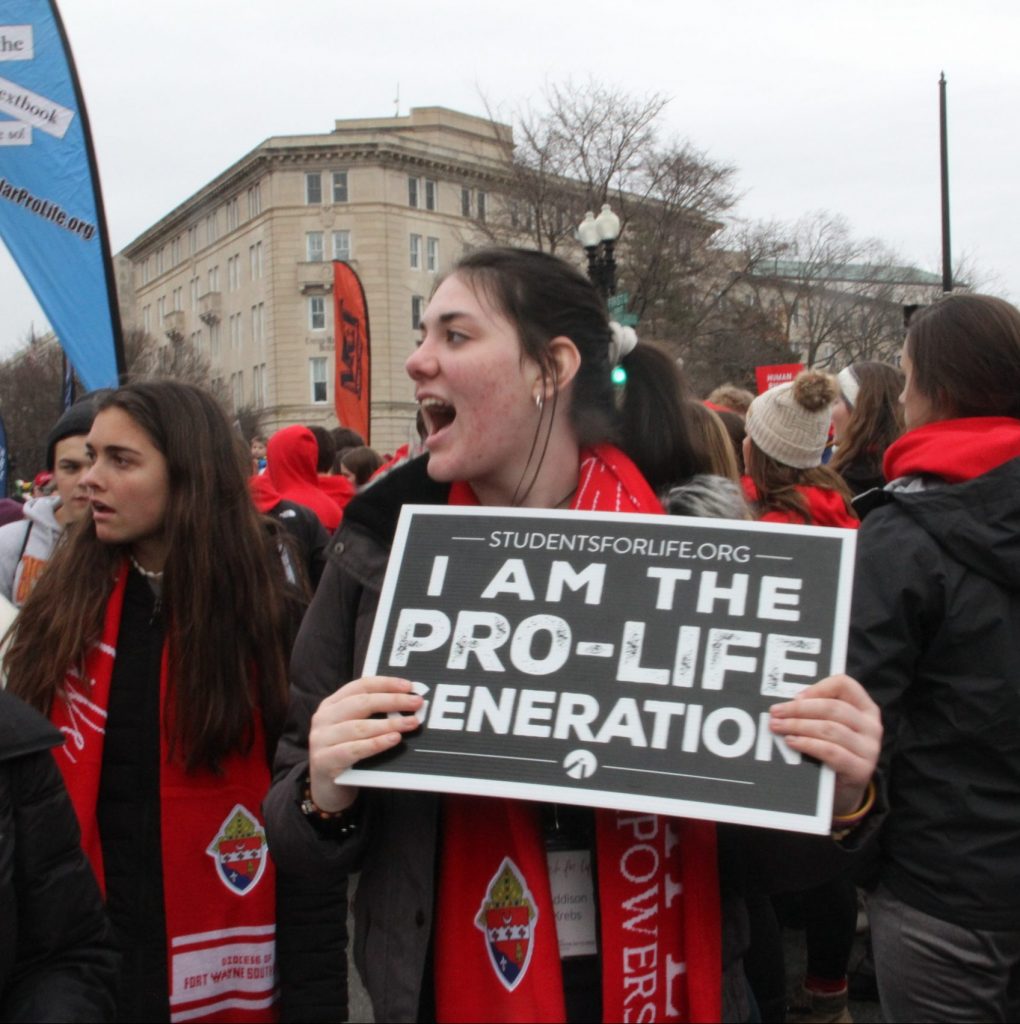 Addison Krebs, right, a student at Bishop Dwenger High School, Fort Wayne, voices her support for all human life in front of the steps of the U.S. Supreme Court Jan. 24. Krebs and hundreds of thousands of other pro-life advocates attended this year’s National March for Life in Washington, D.C. See more March for Life photos and articles inside this week’s issue of Today’s Catholic.

Their journey did not end at the foot of the Supreme Court building. They traveled to two host parishes, where the women prayed a holy hour with adoration and the men prayed silent prayer. Both had opportunities for confession throughout the weekend.

The following day, Bishop Kevin C. Rhoades celebrated Mass for the diocesan marchers at the Basilica of the National Shrine of the Immaculate Conception. During his homily about the conversion of St. Paul, he told them: “It is good to remember and to give thanks for these pro-life conversions on this feast of the Conversion of St. Paul.”

“We must pray for more conversions,” he said. “It is good when we offer prayers of petition for life and for an end to abortion, that we also pray for the conversion of those who are pro-abortion, including the conversion of abortionists themselves. Conversion is possible by the grace of God.” 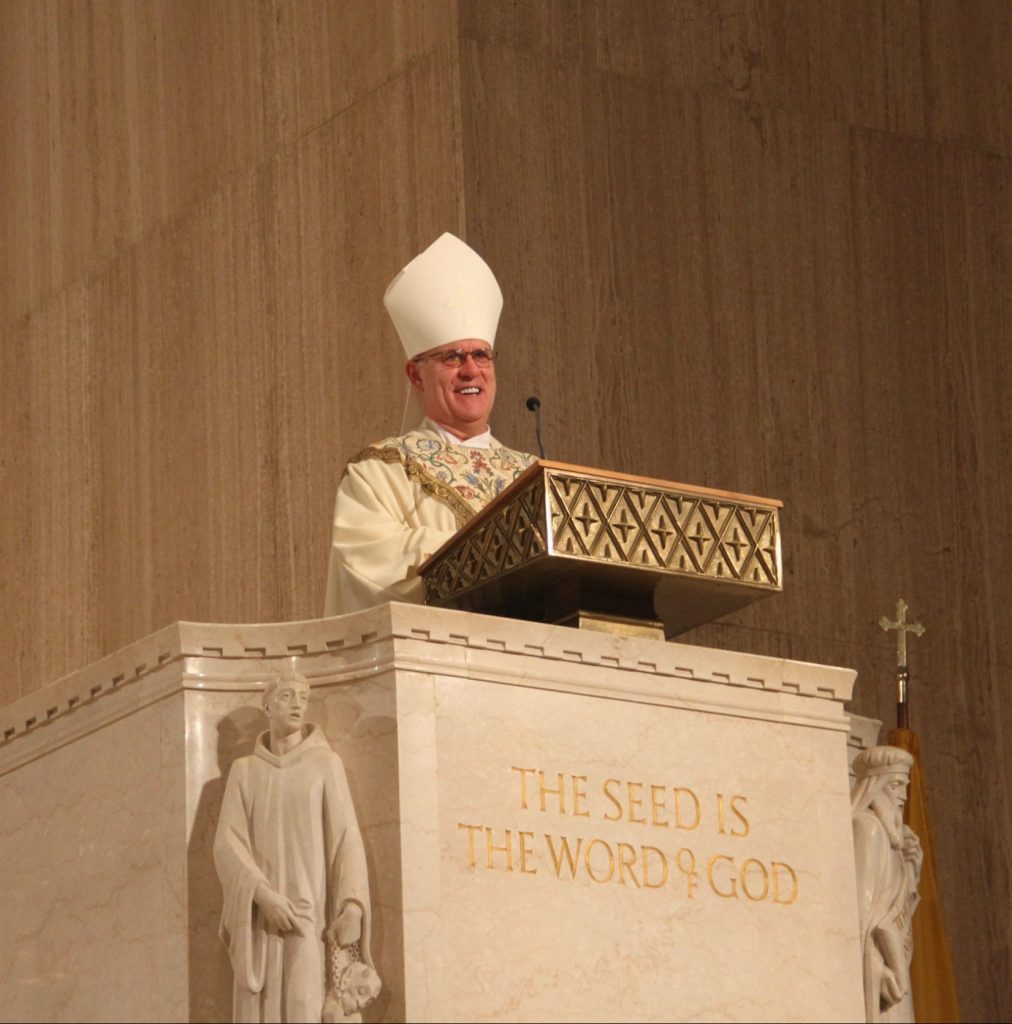 Bishop Kevin C. Rhoades celebrates Mass at the Basilica of the National Shrine of the Immaculate Conception for diocesan pilgrims the day after the march.

After Mass, many from the diocesan group walked to the St. John Paul II National Shrine. There they learned about the life of the saint who died less than six years into their young lives.

In the evening the contingent arrived in Emmitsburg, Maryland, to tour the National Shrine of St. Elizabeth Ann Seton. Several diocesan seminarians who attend Mount St. Mary’s Seminary in Emmitsburg joined them.

Deacon Koehl gave the homily. “There is an entire interior dimension of pilgrimage that drives the pilgrims on toward his or her destination,” he said. “The pilgrim carries on in order to fulfill a purpose which is related to the goodness of the Lord.”

“For all of us here,” he continued, “our goal might have physically been the National Mall — Washington, D.C. — but the interior goal, the moral goal, was the great gift of God to us.”

The students returned to Indiana by bus after the conclusion of Mass.

“We are here for a very simple reason,” Trump told marchers. “To defend the right of every child born and unborn to fulfill their God-given potential.” 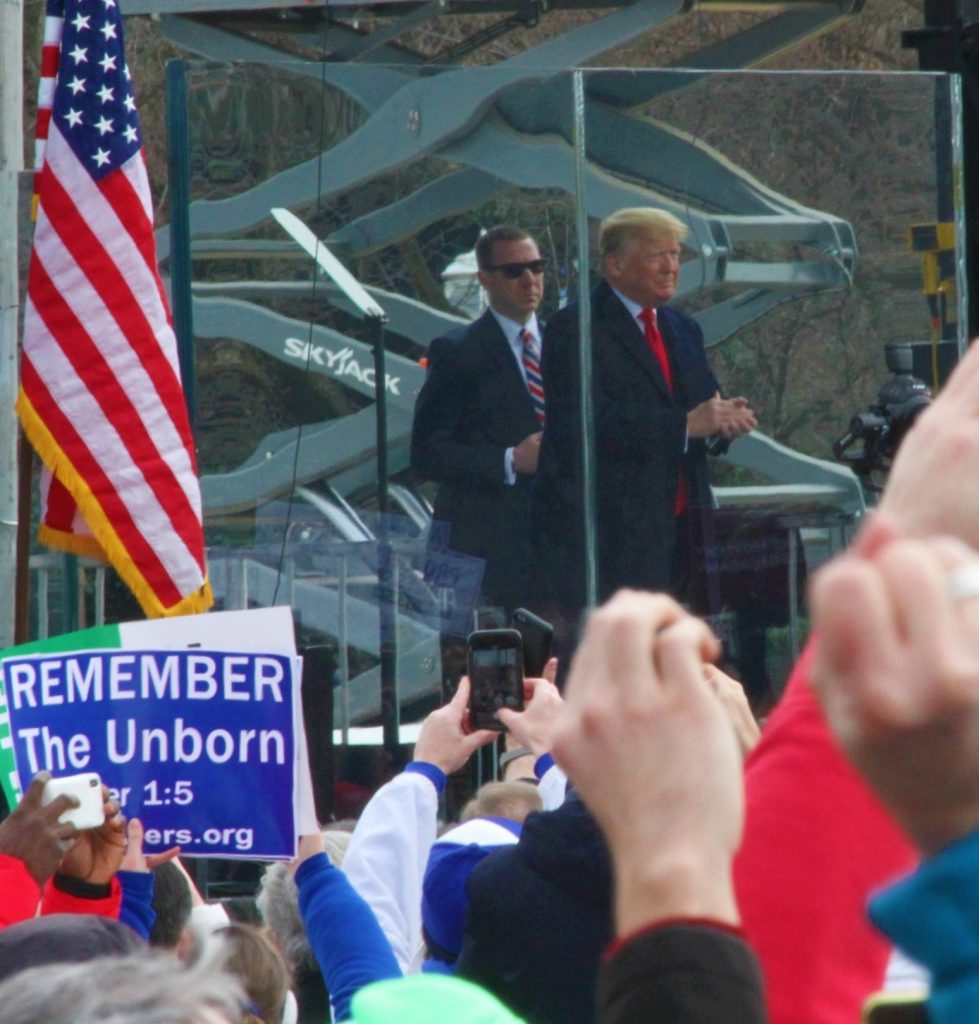 President Trump also commented on the importance of women to the cause of life and affirmed his commitment to implementing pro-life policies.

Before Trump spoke, Vice President Mike Pence and his wife, Karen, delivered a prerecorded video address from the Vatican, where they met with Pope Francis.

Lawmakers from both political parties spoke after the president.

Democratic lawmaker state Senator Katrina R. Jackson D-La., spoke at the rally, expressing disdain for her party’s platform. She told the crowd that Louisiana has Democrats in their state legislature, and many of them support the right to life.

For the first time in history, individuals who survived attempted abortions spoke at the rally.

One of the survivors was Melissa Ohden, a woman who survived a failed saline infusion abortion. She would later convert to Catholicism.

Rep. Stephen Scalise R-La. told the thousands of youth about the steps they can take to successfully lobby their congressman to support pro-life legislation. He specifically referenced the Born-Alive Abortion Survivors Protection Act, which is intended to protect the children of failed abortion attempts.

The congressman informed students that House Speaker Nancy Pelosi, D-Calif., had blocked the legislation from a vote by the House of Representatives. He also directed students to a site where they can find contact information for their district’s representative and urged them to lobby representatives who had not yet declared support for the bill.

Early estimates by park police of Friday’s attendance ranged from 450,000 to 500,000 individuals, far surpassing the pro-choice Women’s March that took place in the nation’s capital the week prior.

Nicolas Sandmann, a student from the Diocese of Covington, also marched with the thousands.

After video surfaced from last year’s March for Life, several news outlets reported that Sandmann and his classmates harassed Native American protester Nathan Phillips who was participating in a separate demonstration. Later video disproved the reports, according to attorneys for Sandmann. Earlier this month, federal judges allowed Sandmann to pursue a defamation lawsuit against CNN, which settled the suit.

Sandmann was visibly undeterred by last year’s events at the march on Friday, posting photos to his official Twitter account with the caption, “I will never pass on an opportunity to March for Life.”

Several speakers commented on the average age of the crowd, suggesting that “Gen-Z” — those born between 1997 and today — would be the generation to end abortion in the United States.

“Young people are the heart of the March for Life, and it’s your generation that is making America the pro-family, pro-life nation,” President Trump said. “The life movement is led by strong women, amazing faith leaders and brave students who carry on the legacy of pioneers before us who for to raise the conscience of the nation and uphold the rights of our citizens, you embrace mothers with care and compassion. You are powered by prayer and motivated by your unselfish love.”   — Joshua Schipper