By Tim Lilley, The Message Editor

That’s how long it’s been since St. Joseph Parish in Jasper began looking at the long-term needs of its church. Significant cosmetic and structural issues came to light, and the process of renovation actually began with a plan for addressing everything.

Parishioner Alan Hoffman, the parish representative for the renovation project, has been there every step of the way. “We had three goals with the effort,” Hoffman said on Dec. 10, just before Bishop Joseph M. Siegel celebrated Mass to bless and rededicate St. Joseph Church and its altar. Eighteen priests of the Diocese of Evansville and the Archdiocese of Indianapolis concelebrated Mass with Bishop Siegel.

Hoffman said of the goals, “We wanted to preserve the history of the church, and we wanted to respect its heritage. We also wanted to make the renovation timeless.” 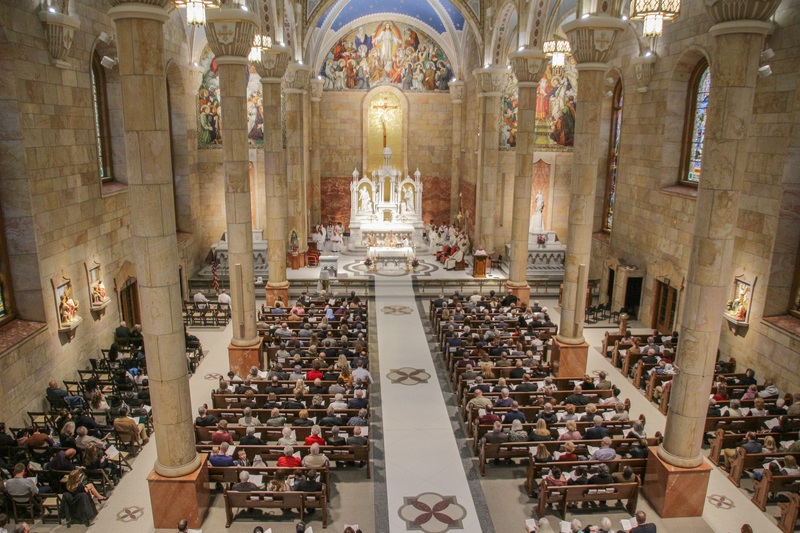 Visitors need only take a few steps into the new gathering area to see that Hoffman and everyone who worked on the project succeeded.

Make no mistake; this was no small effort, and the team that saw it to completion reflected that. Dan Fritch, who coordinated the Our Time campaign to finance renovation of the church’s exterior and interior, and Hoffman were the most visible members of the team. However, as he greeted people before Mass and talked about the project, Hoffman offered the same comment many times as people talked about the project. He said, “It took a village.”

During his homily, Bishop Siegel recognized the whole of the parish community — dating to its founding in 1837, when what was then the Diocese of Vincennes was in its infancy. He mentioned Father Joseph Kundek, St. Mother Theodore Guerin, and all who followed them. He expressed his gratitude to the pastors and associates of St. Joseph during the project — Father Ray Brenner, Father Eugene Schmitt, Father Andrew Thomas, Father John Brosmer, Father Bill Traylor, Father Homero Rodriguez, and Benedictine Father Christian Raab. He thanked Hoffman, Fritch, and all of the volunteers who supported the effort. 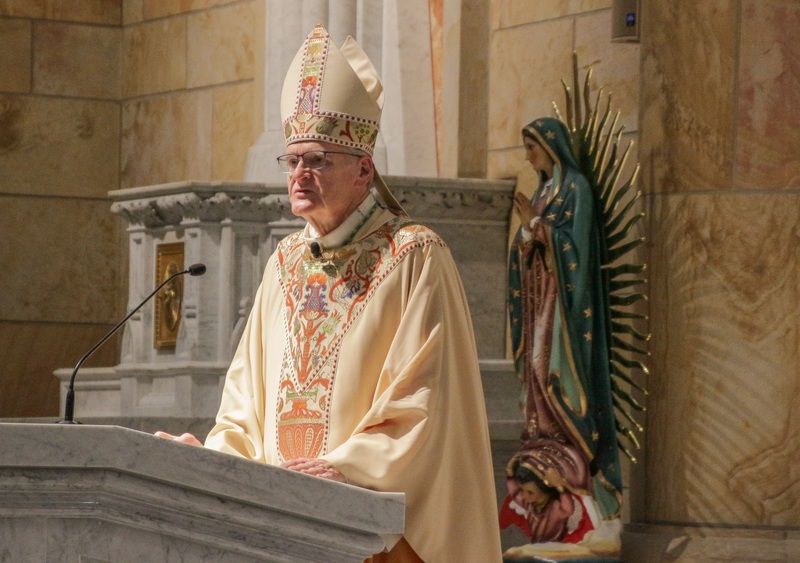 During his homily on Saturday, Dec. 10, Diocese of Evansville Bishop Joseph M. Siegel expressed his gratitude to all involved in the recent renovation, calling St. Joseph Church in Jasper, Indiana, “a dwelling of God and a gateway to Heaven.”

Bishop Siegel also talked about his tremendous appreciation and respect for St. Joseph parishioners, who patiently supported the effort and gathered to celebrate Mass in the Kundek Center for 19 months while the church was closed for renovation.

To all involved, 19 months had to seem like an eternity. To provide some perspective, however, it amounts to a small percentage of St. Joseph Church’s service. Completed in 1880 and consecrated in 1888, the church is 142 years old.

Bishop Siegel talked about anointing the altar, which immediately followed his homily and the profession of faith. He said he would anoint the altar with sacred chrism to set it aside for God’s use, adding, “around this altar, we become most aware of who we are as Catholics.”

He encouraged all to look to the example of the parish’s patron, St. Joseph, and described the renovated church as the dwelling of God and gateway to Heaven. 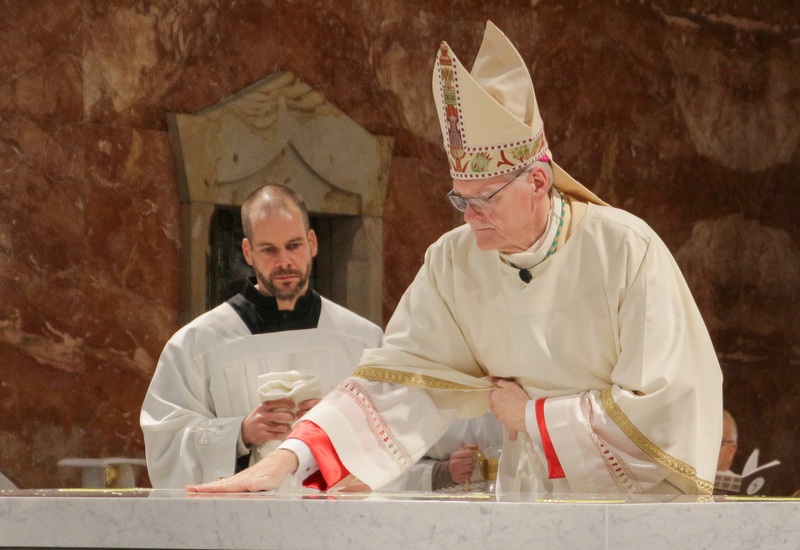 Diocese of Evansville Bishop Joseph M. Siegel spreads sacred Chrism as he anoints the altar during Mass on Saturday, Dec. 10, at the newly renovated St. Joseph Church in Jasper, Indiana.

Physical work began with 20 stained-glass windows that were removed, repaired, and restored offsite, then reinstalled. It is no exaggeration to characterize those windows as priceless. They were originally designed and installed in 1898 by the Artistic Glass Painting Co. in Cincinnati, Ohio.

Hoffman explained that the diocesan Stewards of God’s Grace capital campaign provided the funding for this first phase of the renovation. Fritz coordinated additional fundraising to support the remainder of the exterior and interior work, which was completed back-to-back.

Exterior work included extensive repairs to the mortar joints on the sandstone, and repairs to the roof-truss segments, steeple, and bell tower. Completed in 1904 when Father Basil Heusler served as pastor, Jasper residents have, for decades, respectfully referred to the tower as the Faithful Watchman over Jasper.

Inside, the crucifix behind the altar, which dates to St. Joseph Church’s consecration in 1888, is installed in a structure that is faced with gold leaf. The renovated mosaics above the church’s three marble altars were originally imported from Austria and installed by Italian craftsmen from 1980 through 1911. There are renovated pews that utilize the ends from pews that were built in Boonville and installed in 1902. The new white oak seats are wider, and the new white oak backs of the pews are slanted.

There are more amazing features to the renovated St. Joseph Church than there is space to describe. The best way to experience it is to attend Mass there sometime soon. St. Joseph’s weekend Mass schedule includes Saturday Anticipation Mass at 4:30 p.m. and Sunday Masses at 6 a.m., 7:30 a.m., 9:30 a.m., 3 p.m. (Spanish), and 6 p.m., all eastern time.

Tim Lilley is Editor of The Message.