On Monday, Dec. 21, Bishop Kevin C. Rhoades honored several employees for their years of service at a Mass for those who work for the diocese celebrated at St. Mary, Mother of God Church in downtown Fort Wayne.

More than 20 employees were honored for their years of work, in five-year increments, up to 35. This was the first such recognition, though Bishop Rhoades said he intends to make it a yearly tradition.

“I am blessed to have a staff that has served the diocese and our parishes for so many years,” he said. He also noted that 40% of the curia has more than 10 years of experience at their jobs.

Several different offices within the diocese were represented at the socially distant Mass by at least one employee. The business office, however, saw extensive representation. Nearly every employee in the small office has served the diocese for 20 or more years. 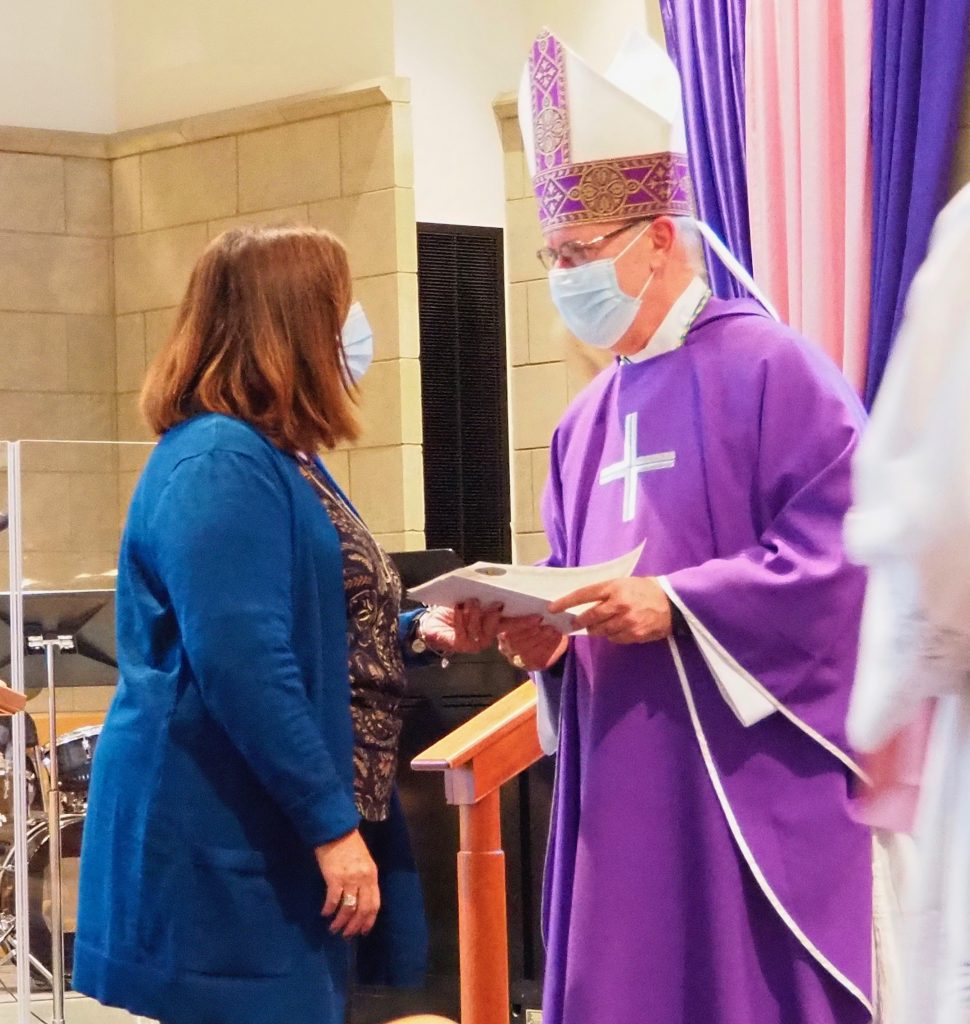 Jennifer Barton
Cathy Bracht is honored by Bishop Kevin C. Rhoades for many years of service during a Mass Dec. 23 at St. Mary, Mother of God Church in Fort Wayne. Bracht has been with the diocese for 35 years as benefits coordinator. A number of longtime diocesan employees were recognized at the Mass.

Cathy Bracht has been with the diocese the longest – 35 years and counting. She handles employee benefits, including retirement plans. Her father was formerly the associate business administrator and in 1985, he asked her to work with him, assisting with correcting pension information that she said “was a mess.” Her father had vowed not to retire until the problem was fixed.

When her father retired from his position, Bracht stayed on. The flexibility of the job was one aspect that kept her coming to work every morning. She feels privileged to have been able to work full-time and not have to miss ballgames and milestones in her two sons’ lives. “If I was sitting in a doctor’s office behind a desk, I couldn’t leave. It was nice to have that flexibility.”

Everything she learned about her job came through experience. Service has been ingrained in her from her youth – from watching her parents serve their parish community of St. Mary in Huntington – and that continued into her job. “I enjoy what I’m doing and just being able to help the teachers or other employees,” particularly those approaching retirement, she said. She has had retired teachers call to thank her for her assistance in preparing them for their next phase of life. “Those are the kinds of things that mean a lot.”

There is a certain sense of fellowship among employees as well as the relationships between the employees and churches and schools throughout the diocese that makes diocesan employees want to stay, they say. Debra Gase has 25 years under her belt in accounting as well and said the variety that her job brings in her day-to-day tasks help her stay engaged and interested.

“Most of it is the core; working with the people I’m working with and those on the other floors. It’s the camaraderie and the help.”

She is grateful for willingness of others to jump in and assist whenever they need to. “I never had that in the few places I worked before. … I never hate getting up to come in to work.”

Many of those in the business department credit the direct supervisor for his leadership and guidance over the years. Chief financial officer Joseph Ryan has been a diocesan employee for over 20 years himself. Like many of his colleagues, he was not looking for a new job when Bishop John M. D’Arcy invited him to a meeting after the ordination of his cousin, Father George Gabet.

“Then I got a call from Msgr. (J. William) Lester several days later. He wanted to meet at the chancery.” Apparently, it was harder for Ryan to refuse a job from Msgr. Lester, and he began working for the diocese the following Monday.

“I stay because of the people,” Ryan said. He credits both Bishop D’Arcy and Bishop Rhoades for their “exemplary” service to the faithful of the diocese, as well as the priests of the diocese who “are probably the most intelligent, compassionate, hardworking group of individuals you will find in any company.” His great honor has been to serve them. He recalls a time when Bishop D’Arcy asked him to help “warm him up” before he threw out the first pitch at a TinCaps game, as well as the loving support the bishop offered when his parents passed away.

Of course, his co-workers are also a large part of Ryan’s reasons for remaining. “I always tell new hires to contribute to your 403(b). And you’ll never have a better work environment in any workplace that you have been in before, or that you’ll go to in the future, than at our diocese.”

That’s what brought Elisa Smith back to the diocese after a stint working for the Archdiocese of Indianapolis. “This is home,” she said.

Data processing employee Sheryl Lee echoed the sentiment. “My favorite part is talking and working with the business managers and keeping the employees happy,” Lee said.

The first face that visitors see at the Noll Building in Fort Wayne has not changed for the last 20 years either. Mary Ellen Moss has sat at the reception desk since 2000, greeting visitors, answering phones and directing people to the proper departments, all with a cheerful smile. Moss is technically part of the business office as well and handles some paperwork aspects for them.

Her husband is an Air Force retiree and the couple moved back to Moss’s native Fort Wayne after his retirement. After working at other jobs, Moss stated that, “This was where I landed, the reception area, and I never left.”

Part of the reason she remains is the simple fact that she enjoys her job. She enjoys working for Ryan and being in a Catholic environment. Most of all, her favorite aspect is “meeting people and trying to get them to the right office.”

Moss recalls how the diocese used to have offices in the chancery building, which now hosts the diocesan museum. Additional locations included the old Cathedral of the Immaculate Conception school building and the campuses of both Bishop Dwenger and Bishop Luers high schools.

While memories of friendships, old times and good deeds swirl around them, most of these workers are not yet ready to leave their workstations. Bracht reiterated, “We’re here to serve. That was always Bishop D’Arcy’s motto; we’re here to serve.” So she, along with her coworkers, say they will continue to serve the diocese with integrity and love for those around them.