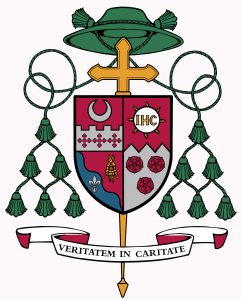 At a Solemn Mass of Installation Jan. 13, 2010, the Memorial of St. Hilary of Poitiers, the Most Reverend Kevin C. Rhoades became the ninth bishop of Fort Wayne-South Bend. Blessed by her new shepherd’s dedication to proclaiming and living the truth of the Gospel in charity, during the first 10 years of his episcopal leadership the parishes, ministries, schools and the faithful of the diocese have increased in faith, wisdom, clarity of mission and fervor.

Click here for some photos from the past ten years.

Born in Lebanon, Pennsylvania, Bishop Rhoades attended Catholic elementary and secondary schools before entering college. His studies continued in Rome at The Pontifical North American College and Pontifical Gregorian University. He was ordained a deacon in 1982 and a priest of the Diocese of Harrisburg in 1983.

In 1985, Bishop Rhoades returned to Rome to earn advanced degrees in dogmatic theology and canon law, after which he served in the Harrisburg diocese until accepting a faculty position at Mount St. Mary’s Seminary. He was named rector of the seminary in 1997, a role he fulfilled until his appointment by Pope St. John Paul II as bishop of Harrisburg.

It was at this time that he adopted his personal episcopal motto, “Veritatem in Caritate,” “In Truth and Charity.” The motto which has served as a guidepost and characterized his journey of thousands of miles to every corner of the Diocese of Fort Wayne-South Bend — as well as a ministry of presence on the weekly Redeemer Radio program, “Truth in Charity.” 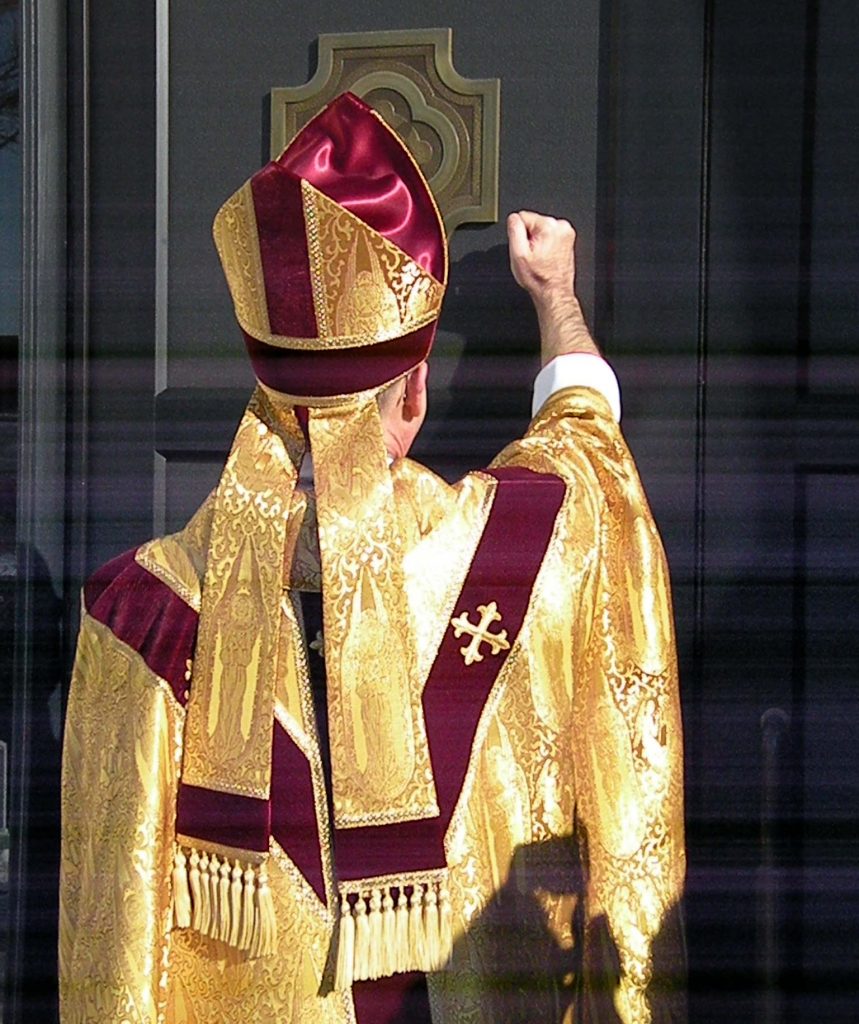 Today’s Catholic file photos
As the Mass of Installation begins, Bishop Kevin C. Rhoades knocks on the door of the Cathedral of the Immaculate Conception, Fort Wayne. Bishop Rhoades became the ninth bishop of the diocese on Jan. 13, 2010.

A mere three days after Bishop Rhoades departed Harrisburg, a Mass of Installation took place at the Cathedral of the Immaculate Conception, Fort Wayne. It was celebrated by Bishop Pietro Sambi, Apostolic Nuncio to the United States; Bishop Daniel Buechlein, OSB, then-bishop of the Archdiocese of Indianapolis; and Bishop D’Arcy. Hundreds of priests and lay well-wishers from Pennsylvania and Indiana attended.

From the day of his ordination to the episcopacy in 2004, in Harrisburg, Bishop Rhoades has steadfastly directed the faithful of the diocese to Mary and her Son. In the Diocese of Fort Wayne-South Bend his prayers for young men discerning a vocation to the priesthood have been constant, and his example serves as a source of encouragement to them. Vocations to the priesthood and to the permanent diaconate continue to flourish under his care. 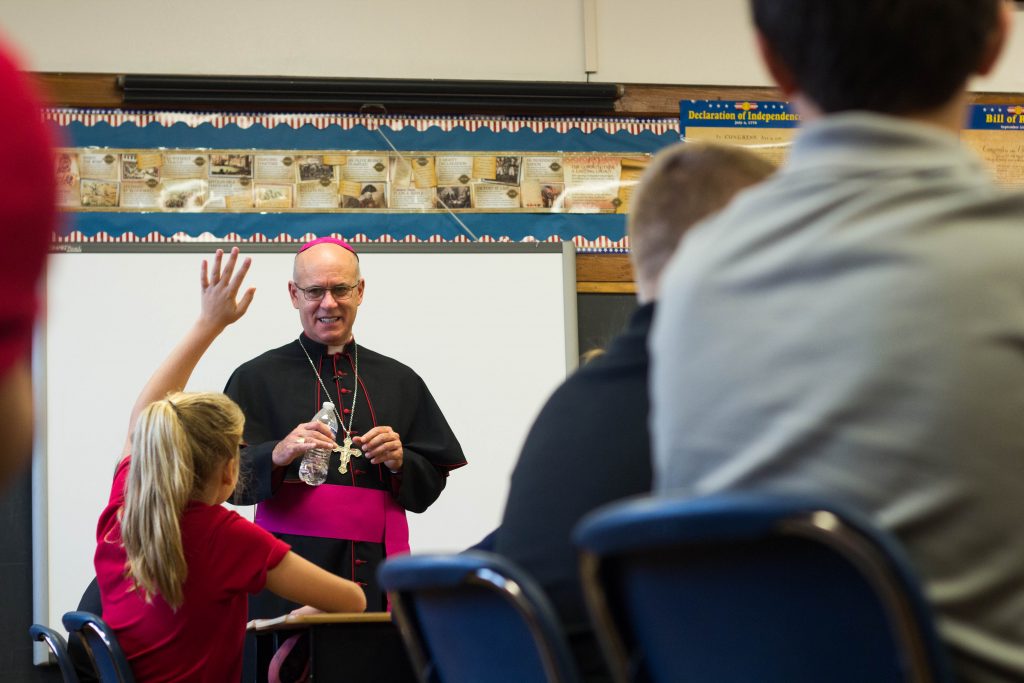 Students of Most Precious Blood School, Fort Wayne, engage with Bishop Rhoades during a pastoral visit in 2016.

The spiritual education of teenagers and young adults has called the shepherd to accompaniment. Among his engagements, he has been present to them at Theology on Tap gatherings; in worship; and at retreats, rallies and World Youth Day pilgrimages to Poland, Spain and Panama.

At the Church of St. Francis of Assisi in Panama City Jan. 20, Bishop Rhoades again placed the spiritual focus of World Youth Day pilgrims on the Savior, through His mother. Reflecting on the Gospel of the Wedding Feast of Cana, he reminded the young people of Mary’s response at the Annunciation.

“‘Behold the handmaid of the Lord; let it be done to me according to your word.’ These words reflect Mary’s basic and fundamental attitude and spirit, the same attitude and spirit that we see at the wedding feast in Cana: faith and openness to God’s will,” he said to them. 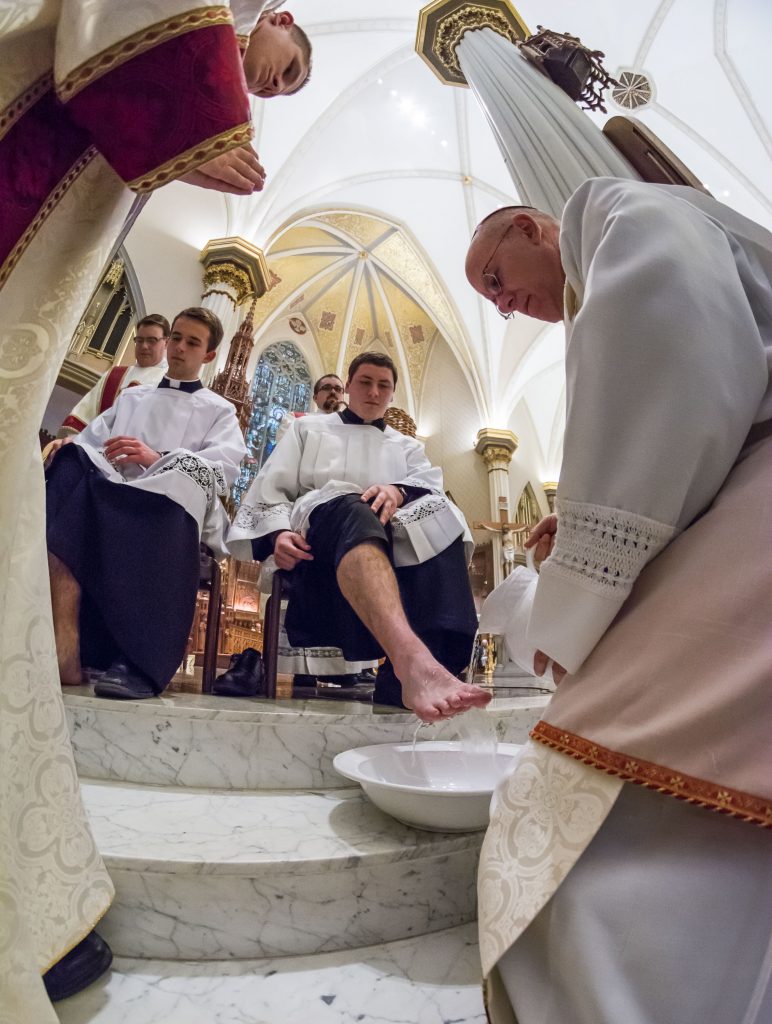 The bishop washes the feet of seminarians during Holy Thursday Mass of the Last Supper April 2, 2015, at the Cathedral of the Immaculate Conception.

“We also learn from Mary at Cana how to pray: not by asserting before God our own will and our own desires, however important they might be or however reasonable they may seem to us, but rather to bring our needs and desires before the Lord and let Him decide what He intends to do. ‘Not my will, but your will be done.’ Mary teaches us this,” he taught. “We learn from Mary humility and generosity in accepting God’s will and believing that He knows what is best for us, what is our true good.”

It’s a message that has become a hallmark of Bishop Rhoades’ episcopal leadership. In 2014, he led a Marian consecration of the diocese, “33 Days to Morning Glory” – a fruitful initiative that served as an impetus for Catholics in parishes across the diocese to engage more deeply with their faith and live out their baptismal promises. 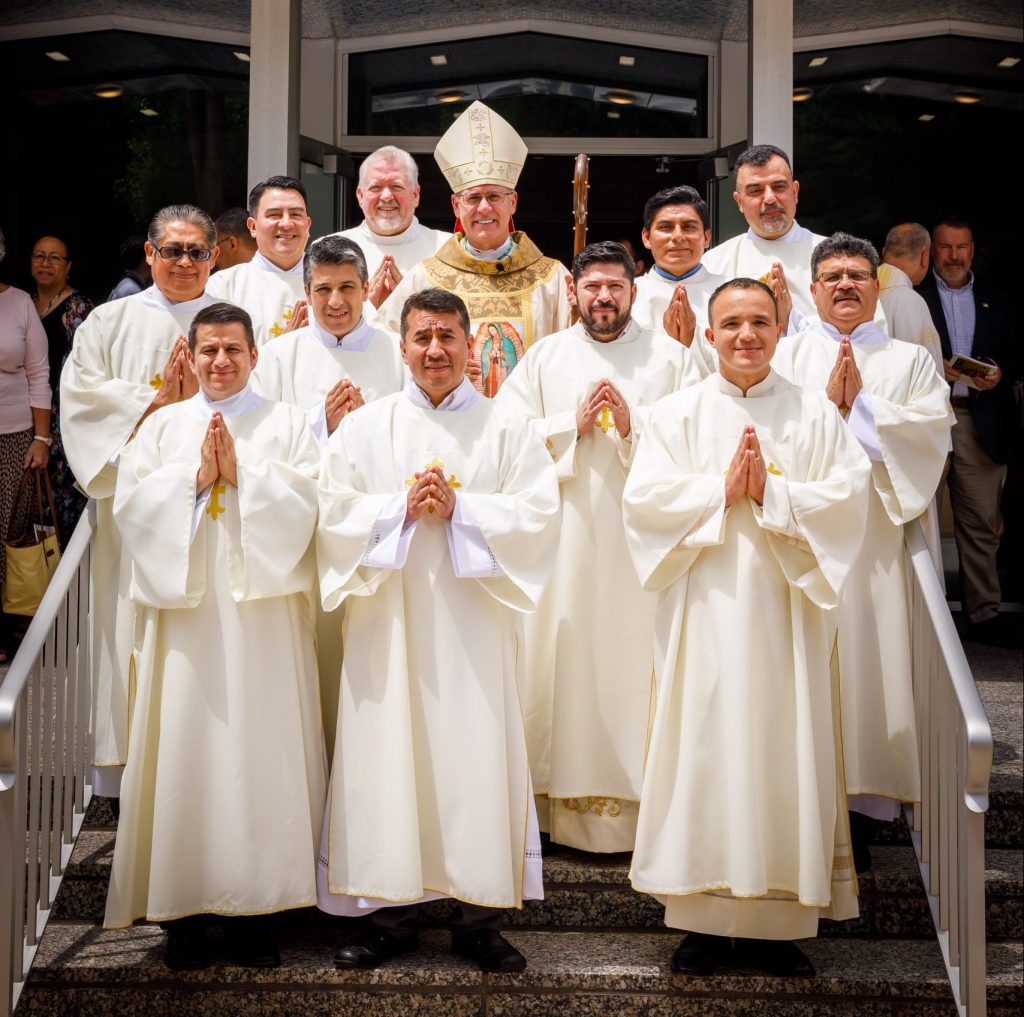 The first class of deacons to have carried out their formation completely in Spanish stands with Bishop Rhoades following their ordination in July 2018 at St. Matthew Cathedral, South Bend.

“Among the many gifts and talents that Bishop Rhoades has brought to our diocese, for me the greatest is his ability to be a clear and steadfast teacher and upholder of the Catholic faith,” said Father Mark Gurtner, vicar general. “In these confusing times in the Church and in the world, this is a tremendous blessing for our diocese.”

Also encouraging in its potential is another initiative of the bishop, Next Generation Parish. The reinvigoration program currently is being piloted in several parishes.

Lending his expertise to Catholic educational and charitable organizations both national and international, Bishop Rhoades serves as chairman of the USCCB Committee on Doctrine; a member of the USCCB Administrative Committee, the USCCB Committee on Religious Liberty and the Board of Directors of Catholic Relief Services. He is chairman, a member of the board of directors/trustees or an episcopal advisor of Our Sunday Visitor, Ave Maria University, Basilica of the National Shrine of the Immaculate Conception, Theology of the Body Institute, Bishops’ Advisory Council of the Institute for Priestly Formation, National Conference of Diocesan Vocation Directors, Augustine Institute, Catholic Leadership Institute and the Society of Catholic Scientists. 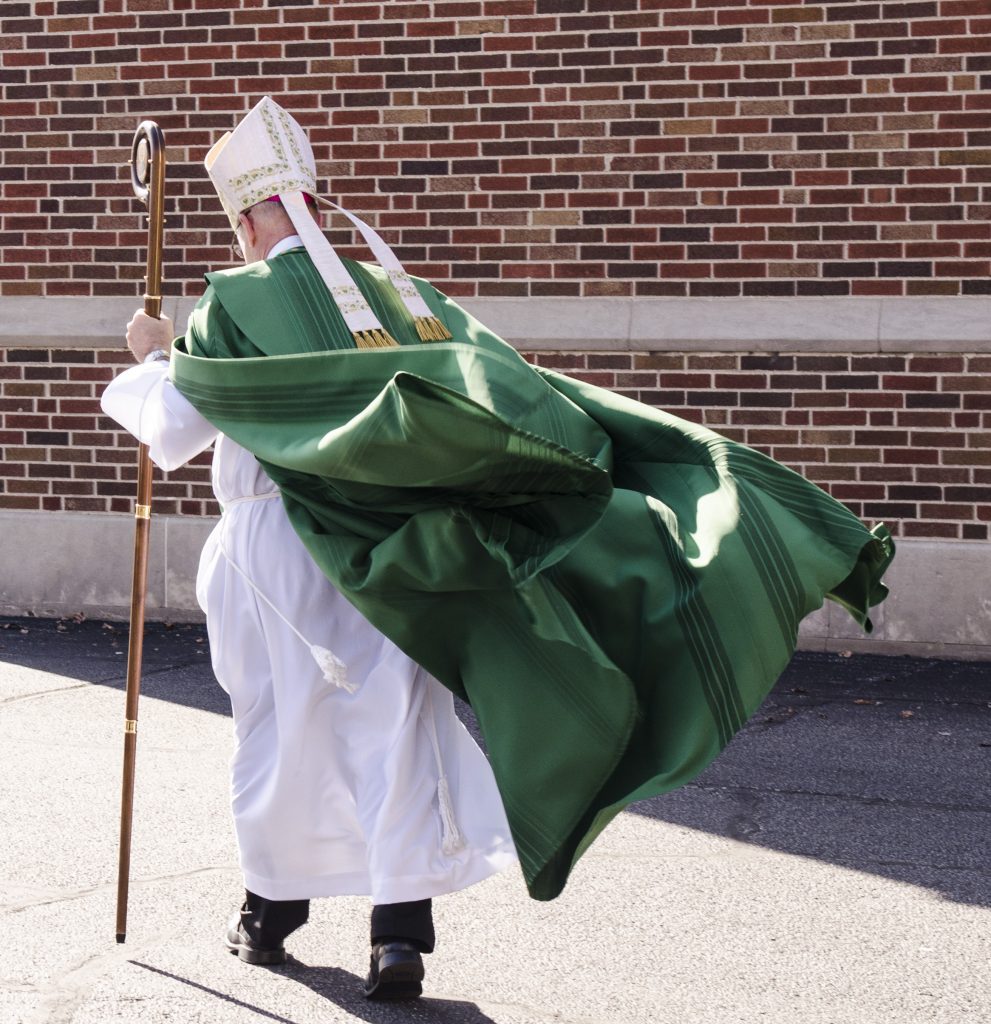 The bishop makes his way toward the reception hall following the Rite of Election at St. Matthew Cathedral in 2017.

Because of the administrative obligations of the office of the bishop, and certainly in larger dioceses, it’s quite easy for bishops to function more like CEOs than shepherds, noted Msgr. Michael Heintz, a priest of the Diocese of Fort Wayne-South Bend and theology professor at Mount St. Mary’s. “But it’s abundantly clear that Bishop Rhoades finds deep satisfaction and joy in his principal role as shepherd of the people of Fort Wayne-South Bend. It is very manifest how much he loves parish life and pastoral work, and no doubt one of the reasons he spends so much time on the move (just follow his public calendar!) is his desire for and joy in being with God’s people, celebrating the sacraments, preaching the Word and coming to know his flock. In every parish he knows so many folks by name, is quick to respond to their needs and inquiries and has come to witness quite personally “Truth in Charity.”