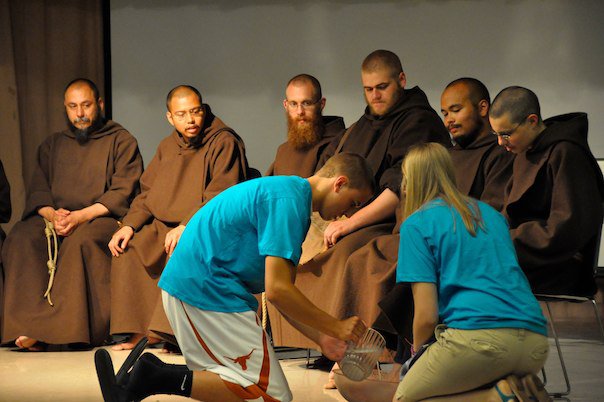 During the final day of the retreat, the teens showed their gratitude to the Franciscan Brothers Minor by washing their feet. Travis Rauwerdink, left, and Samantha Baus are shown washing Bother Solanus’ feet. Brothers in the photo are from left, Father David Engo, superior, Brother Juniper, Bother Felix, Brother Lawrence and Brother Leo Maria.

NOTRE DAME — Youth from across the Diocese of Fort Wayne-South Bend recently participated in a bcX retreat held at Holy Cross College in South Bend. BcX refers to the notion to “be Christ” and “see Christ” in community. “X” is an ancient Hebrew symbol for Christ. Service opportunities along with prayer, participation in the sacraments, discussions and social time were the hallmark of this week-long gathering in mid-July.

One participant from Fort Wayne, Eddie Black, shared her insights on the retreat.

“The bcX-Servant Leadership retreat, which teaches how to be Christ to others and therefore see Christ in others, was offered to the youth of the Diocese of Fort Wayne-South Bend both this summer and last. After much prompting from my friends, I went on the week-long service retreat. Joining over 60 teens for the week were numerous young adults who led our small groups each day, and the Franciscan Brothers Minor, who quickly became our favorites!” she said.

The retreat offered teens much in the way of spiritual growth opportunities. Black said, “Each day was a balance of sacraments, prayer, service, social time and time within our small groups. In the mornings until the afternoon we worked at various service sites around South Bend, and then in the evening we had sessions with speakers, like Father Dan Scheidt and Sister Marie Morgan, with small group time and other activities. The sessions were built around the luminous mysteries of the rosary.”

She along with the other youth there felt open to the spirit of service. She said, “By balancing the work we were doing for the needy with our own Lord’s teachings, we were truly able to have our eyes and hearts opened to how we are called to a sense of community with everyone, regardless of their situation.”

Learning about and volunteering at the service ministries already in place in the South Bend area inspired the teens. Black said, “I was very touched seeing the organizations that were established to help the poor, and also the people who worked at these places. One that truly stands out to me is Our Lady of the Road Drop-In Center, part of the ministry of Catholic Worker.

“Here, the homeless are served coffee and breakfast, are able to take a shower or do their laundry, and also get what they need from the back warehouse. While my small group was working at this building, we were able to sit down and visit with the guests.

“It was at the Drop-In Center that I finally realized why we need to help others, no matter their circumstance. I was always a person who would never give money to the homeless, and even looked down on them, thinking that they had to have done something wrong to be in their situation. I believed that people became homeless because they were careless and that it is their own duty to help themselves. But, within just minutes of speaking to the guests and hearing their stories, I finally had my heart opened and saw them as Jesus sees them. It does not matter how they came to be homeless, if they need our help, who are we to deny them?”
She continued, “That was probably my ‘wow’ moment of the week. but it was partnered with an amazing celebration of the sacrament of Reconciliation, the washing of the friars’ feet, fun with friends running through the sprinklers, and of course, celebrating our Lord’s sacrifice in Mass and Adoration.

Teens processed to the grotto at Notre Dame for the rosary.

“I was given the excellent opportunity to cross the bridge between ordinary and extraordinary, and everyone is offered many similar chances. Of course we’ll have to step outside of our comfort zone, and break down the walls that separate us from our neighbors, but it is only when this happens that we can allow the extraordinary, which is found in Christ to come and fill our ordinary lives. And that’s what I learned at bcX.”

All the students who participated in the bcX retreat agreed with Black when she offered a note of deep appreciation for the people who provided the enriching retreat opportunity.