View all the photos from WYD at the photo gallery. 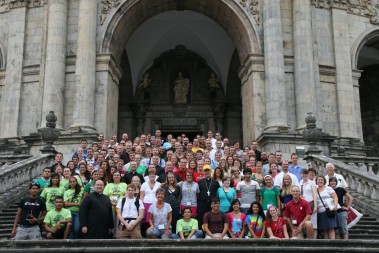 The homecoming of the 120 weary but spiritually enlivened World Youth Day pilgrims was not without fanfare when eager family and friends met the homebound pilgrim busses at St. Vincent de Paul Parish in Fort Wayne and St. Anthony de Padua Parish in South Bend late on Aug. 22 — 12 days after they had departed on the trip of a lifetime.

The group of teens, young adults and adults from all across the Diocese of Fort Wayne-South Bend, who had prepared physically, spiritually and financially by raising funds for almost a year, began their 12-day European trek on Aug. 10, when they made their way across the seas to Paris for a connecting flight to Toulouse in southwestern France.

From there the group, led by Bishop Kevin C. Rhoades, bussed to Lourdes where they spent Aug. 12-13 in spiritual retreat.

Lourdes is a market town at the foothills of the Pyrenees, known for the Marian apparitions of Our Lady of Lourdes that are reported to have occurred in 1858 to Bernadette Soubirous. Our Lady visited with St. Bernadette in the grotto of Massabielle some 18 times, where Bernadette is said to have dug in the very ground where the healing waters of Lourdes now flow.

The bus ride through the Pyrenees Mountains from Toulouse to Southern France gave the pilgrims time to pray the rosary or chaplet of Divine Mercy together and enjoy the beautiful countryside dotted with corn fields, cows and orange-tiled roof topped villas. It had been reported that at WYD pilgrims from across the globe meet and trade cultural items. So many pilgrims crafted rope rosaries as they traveled the highways to share with their Catholic friends from abroad.

After checking in at their hotel, the Arcade, which was located a stone’s throw from the Lourdes complex, the enthusiastic pilgrims descended on the area to investigate the site. The activities were vast and varied.

The large group broke into smaller travel groups and took advantage of every opportunity to witness God’s glory there, including praying at the grotto, bathing in the healing baths, participating in the torch light ceremony, daily Mass in one of the beautiful chapels or the Basilica of the Immaculate Conception, diocesan penance service, following in the footsteps of St. Bernadette, a powerful trip up the hill to pray the Way of the Cross High Stations led by Bishop Rhoades, Eucharistic Procession with Adoration and Mass in the grotto with Bishop Rhoades and the diocesan priests on tour with the group. And, of course, there were many shopping trips and late night gelato runs as well. 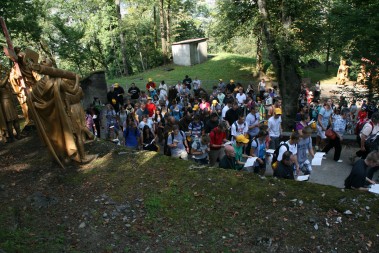 The camaraderie within the group was only heightened by the jovial presence of the young priests, deacons and seminarians. Though the solemn events were many, there was also time for fun.

Fort Wayne-South Bend pilgrims shared many of the events at Lourdes with a group from the Diocese of Harrisburg led by Bishop Joseph McFadden, all of whom were destined for WYD in Madrid as well.

Franciscan Father David Mary Engo, who along with his fellow Franciscan brothers traveled with the group, gave a pep talk to the youth of Fort Wayne-South Bend one evening and said, “This is one time you can be a loud and rowdy as you want.”

He went on to remind the pilgrims that a pilgrimage may be filled with hardships that they might offer up for their loved ones who are suffering.

The pace at the grotto allowed for reflection and prayer in preparation for the upcoming five-day WYD event in Madrid Aug. 16-21 where the pilgrims would join an estimated 2.5 million other Catholic youth in welcoming Pope Benedict XVI.

Each evening the pilgrims gathered at the hotel for dinner, but roadside crepe stands, outdoor cafes, pizza parlors and gelato shops enticed them with the local cuisine.

Sunday, Aug. 14, the group rose early to board busses that took them through the rolling French countryside to Loyola to walk the very ground St. Ignatius inhabited. Loyola is a beautiful complex where the original childhood home of St. Ignatius stands, castle-like, in its splendor. It was in this “Holy House” that the saint had a mighty conversion while he recuperated from a battle wound.

The diocesan group lunched and celebrated the Eucharist in the ornate cathedral there with the group from Harrisburg then boarded bussed once again — this time for Burgos, the home of one of the oldest intact cathedrals in France. The pilgrims found this ancient city stunning in its majestic beauty and found time after check in and a delightful five-course French dinner to tour the nearby neighborhood

Nestled back in the cathedral square groups had come together to celebrate their passion for Jesus with colorful lights, musical bands and singers, and much enthusiastic cheering from the crowd. One small group left the merriment in search of a place for quiet reflection and stumbled upon a chapel holding Eucharistic Adoration where the priest was blessing each individual all the way out into the streets.

These were the moments of grace that planted the seeds that would spring forth in Madrid at WYD.

Morning rose on the feast of the Assumption when the pilgrims gathered for Mass at the ancient Cathedral of Burgos.

Another bus ride took the pilgrims on a three hour ride through mountain tunnels and and over passes to their final destination — Madrid. The sprawling city, preparing to accommodate the 2.5 million young Catholics over the next week welcomed the Fort wayne-South Bend pilgrims with charity and Spanish hospitality.

Once all were checked into the Tryp Ambassador Hotel the pilgrims explored the area to find wonderful shops, plazas and restaurants serving local foods such as Paella. Many of the restaurants in Madrid offered a special menu for pilgrims who presented their official WYD food vouchers.

Meeting back at the hotel the group hiked to a restaurant where they dined on local cuisine and then off to collect their backpacks containing all they would need during their stay in Madrid. The yellow Fort Wayne-South Bend baseball caps made the group easy to spot. Along the way there was much to see, including groups of youth dancing and singing in anticipation of the arrival of Pope Benedict.

August 16 was a free day when the pilgrims toured the city and enjoyed culture events. They eventually joined the masses of youth who arrived on the Plaza de Cibeles for the official WYD opening Mass celebrated by the archbishop of Madrid, Antonio Maria Rouco Varela. The enthusiasm was palpable as the youth worshipped together. As groups from various countries passed by members would stop to exchange names and trinkets. The rope rosaries, which were a big hit, were traded for pins, flags, hats and more.

The next three days began with morning catecheses sessions and Mass, which for the group were held at the beautiful Ss. Thérèse and Joseph Church. The pilgrims were thrilled to find that the relic of St. Thérèse Lisieux visiting there, and they were eager to venerate such a great and inspiring saint.

Other catechesis sessions offered by bishops from around the world and in various languages were held around the area in churches, schools, auditoriums and sports centers. Sessions held at the the Knights of Columbus sponsored Life and Love Center with the ever joyful Archbishop Timothy Dolan from New York were favorites among the group. They learned that they were called to love Jesus and then share that love with others.

Other activities included a rousing vocations fair with speaker Father Robert Barron, Exalt sessions, Eucharistic Adoration and so much more. The pilgrims wasted no time as they walked or rode the intricately connected metro with seven-day passes to their chosen events.

The streets of Madrid were packed with Catholic youth in anticipation of the arrival of Pope Benedict XVI on Thursday, Aug. 18. Many of the youth from this diocese were able to see the pope in his popemobile as he was escorted to the central altar located at Plaza deCibeles before the seat of Madrid’s Town Hall, where he would receive the keys to the city and gifts from youth who represented several countries present there. The pope offered a celebration of the Word with a blessing for the youth that was received with great ardor.

Stations of the Cross

The following day the streets were lined again with excited youth to participate in the WYD Stations of the Cross at which the pope was present. The WYD cross made its way to each  station where special intentions for those suffering were offered.

Saturday, Aug. 20 began with the pilgrims attending a special Mass for American pilgrims back at the Love and Life Center where joyful worship music abounded. The pilgrims enjoyed being shown on the big screen there as cameras captured their antics.

The liturgy was celebrated by Cardinal George of Chicago, with homily by Archbishop Dolan.

Trek to the airfield

They then made an incredible journey on foot to the airfield where the pope would arrive for the vigil and the Sunday Mass. Unfortunately their assigned spot was taken and the gates closed by the time they arrived about 6 p.m. They encountered a lightning storm through which they prayed together fervently and slept in a field outside the grounds on air mattresses. The group pooled money to buy sandwiches as the officials would not take their vouchers for packaged food. During the evening Pope Benedict held a special service within the gates and consecrated the youth of the world to the Sacred Heart of Jesus.

Sunday morning the weary group headed to the gate to locate to their spot, which they were told was open now and were turned away again. With much dismay and discernment the group chose to return to the hotel and attend Mass together at Ss. Thérèse and Joseph where they had attended catechesis sessions earlier in the week. Priests from the Diocese of Fort Wayne-South bend concelebrated Mass in English for the pilgrims, consecrating them to the Sacred Heart of Jesus as well.

The safe, but weary pilgrims, were surprisingly not disheartened by this misadventure. Moreover they all agreed that even though they were not able to attend the papal Mass, this has been an exciting and fulfilling pilgrimage.

Back at the hotel the exhausted pilgrims loaded their luggage that was packed with new found French and Spanish treasures on busses that took them to the airport for departure to Paris. One of the flights was delayed due to electrical storms but all arrived safely.

A few determined pilgrims even rose very early on Aug. 22 and took the train into the city to see Notre Dame and the Eiffel Tower. Then back to the airport for the long flight back home where they gathered to offer thanksgiving at a final Mass in the Spiritual Center of St. Vincent in Fort Wayne.

The spiritual pilgrimage was challenged by moments of mania, however the consensus was positive. The Spirit-fed group conceded that the miraculous moments of grace experienced by many were well worth the effort.