In the Catholic Church, the diaconate is the initial rank of ordained ministry. Some deacons continue on after their ordination to the diaconate to become ordained priests: Others have been called to live and serve permanently as deacons.

Deacons are members of the clergy who promise to obey and assist their bishop and his priests in the celebration of the divine ministries. Deacons proclaim the Gospel during Mass and also may be given the task of preaching. In addition, they serve as ordinary ministers of holy Communion. 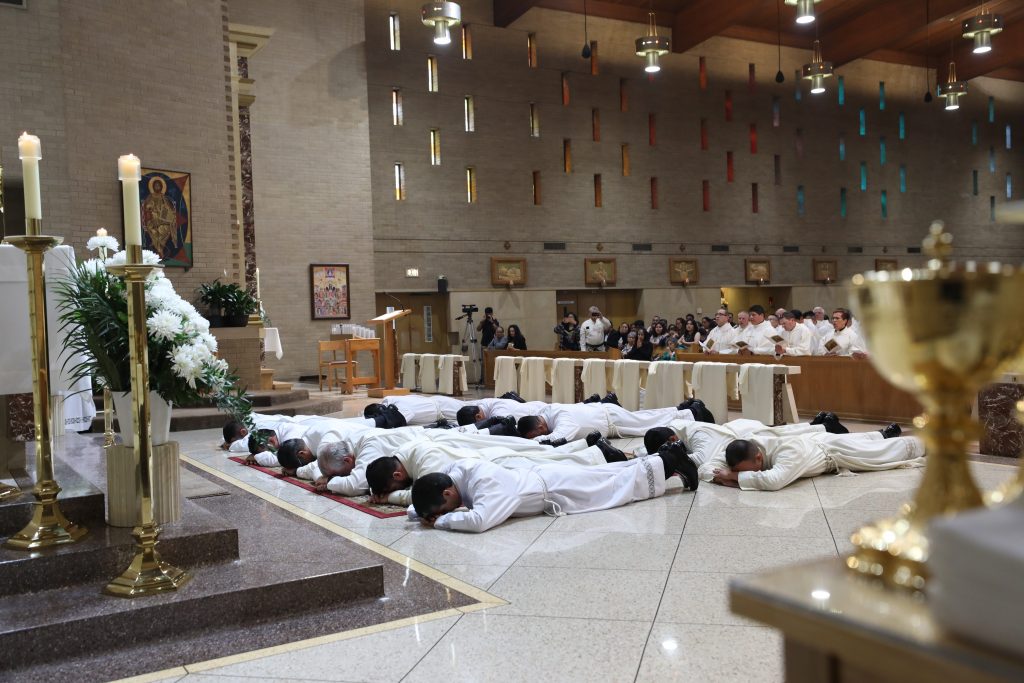 The ordination of 11 Hispanic permanent deacons at St. Matthew Cathedral, South Bend, on June 23, was the first time in the Diocese of Fort Wayne-South Bend that the diaconate formation program was conducted in Spanish. The ordination Mass was also celebrated in Spanish. Above, the candidates prostrate themselves before the altar in an act of dying to themselves before rising to new life in holy orders. — Photos by Peter Ringenberg

As clerics, deacons are required to recite morning and evening prayer from the Church’s Liturgy of the Hours. Like priests and bishops, they are also ordinary ministers of the sacrament of baptism, and they can serve as the Church’s witness at the sacrament of holy matrimony when done outside of Mass. Deacons also may bring viaticum to the dying and preside at funerals outside of Mass, as well as burial rites. They may lead various other liturgical services, such as benediction of the Blessed Sacrament, and may bestow certain blessings. Deacons cannot celebrate Mass, anoint the sick, hear confession or give absolution.

Besides the ministries of the word and the liturgy, the ministry of charity is an essential part of the diaconal vocation. The deacon is a sacramental sign in the Church of “Christ the Servant.”

“To serve as deacons is a special call to holiness and a serious commitment to Christ and the Church,” Bishop Kevin C. Rhoades said at a Mass of ordination to the diaconate in 2018. “The call to the diaconate involves a process of discernment by men, their wives and by the Church. I pray that many will carefully discern whether the Lord may be calling them to proclaim His Gospel and serve the Church’s ministry as ordained deacons.”

Similar prayers have already rendered abundant fruit in the Diocese of Fort Wayne-South Bend. It was in 2006 that Bishop John M. D’Arcy reinstated the preparation process for the permanent diaconate, and on May 21, 2011, a class of 11 men became the first group ordained to the Sacred Order of the Diaconate in the diocese in 28 years. Bishop Rhoades conferred the sacrament upon them in the Cathedral of the Immaculate Conception, Fort Wayne.

Deacon Stan LeMieux, a Goshen resident and member of St. Patrick Parish, Ligonier, was among those ordained that day. He said it “was the holiest day of my life.” Since then, “what I’ve enjoyed most, besides teaching and ministering to the sick, is leading and growing deeper in prayer with fellow parishioners.”

Seven years later, on June 23, 2018, diocesan history was made. The first Spanish-language ordination of 11 Hispanic deacons took place at St. Matthew Cathedral, South Bend — the culmination of the aspirants’ four years of formation. 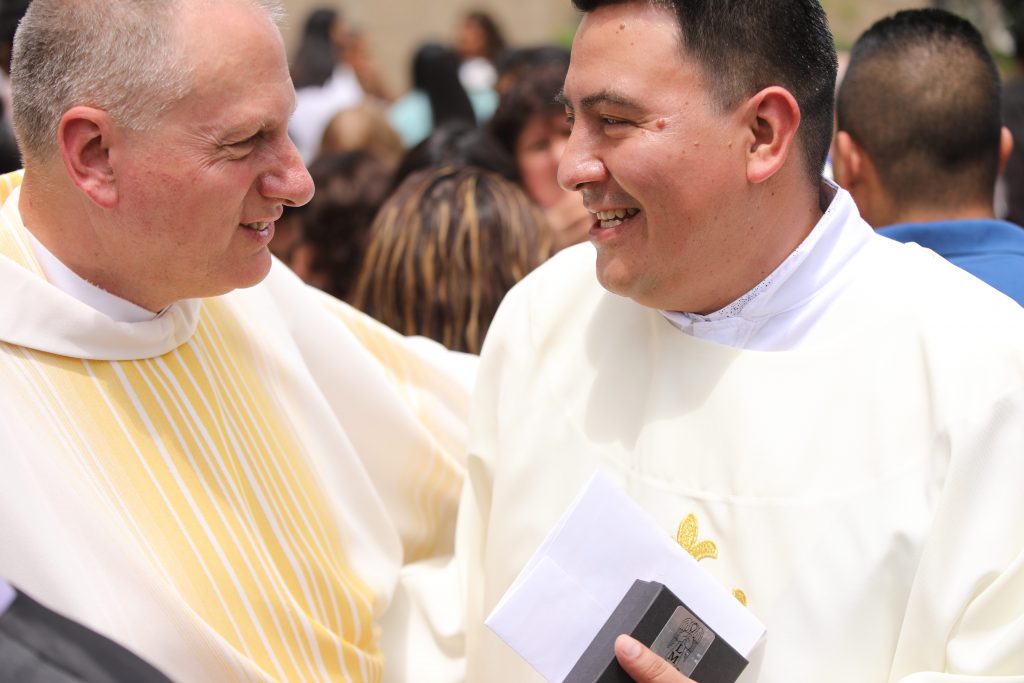 The ability to offer formation in Spanish to aspirants to the diaconate is pretty unique, Bishop Rhoades has acknowledged. Qualified professors who can speak Spanish are not plentiful, but the Diocese of Fort Wayne-South Bend has a valuable resource in the University of Notre Dame. Most of the courses in the last two diaconate programs were taught by professors from the Notre Dame Theology Department. Dr. Timothy Matovina, chairman of the department, and Dr. John Cavadini, director of the McGrath Institute of Church Life, are collaborating with the diocese to provide instructors for live lectures and online classes for the formation program. “The diocese is very grateful for the role Notre Dame is playing in the formation of deacons,” said Deacon LeMieux.

Deacon LeMieux directs the deacon formation program for the diocese, working diligently to facilitate and support Bishop Rhoades’ fortification and expansion of it. He credits the bishop for the program’s current robustness, in terms of both participation and preparation.

“The number of candidates for the permanent diaconate has grown very significantly under Bishop Rhoades. He’s kind of a magnet; he encourages them.” 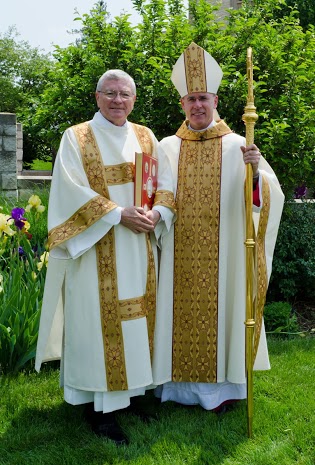 Similarly, the five young men who were ordained priests on June 2, 2018, at the Cathedral of the Immaculate Conception — the largest group since 1975 — represent part of a renewed interest in the religious life among young people, said Father Andrew Budzinski, diocesan vocation director. The diocese now has 25 young men studying in seminary programs for the priesthood.

The office of deacon is one of service in the sacred liturgy and in the ministries of charity. “Diaconate” comes from the Greek word “diakonia” or “service.” A symbol of the ministry is the basin and towel, items Jesus used when he washed the feet of the apostles, illustrating how everyone is called to love and serve others.

The diaconate was restored as a permanent ministry by Pope Paul VI on June 18, 1967, upon the recommendation of the Fathers of the Second Vatican Council. The first deacons in the United States were ordained in 1971. The restoration of the diaconate by the Second Vatican Council follows the tradition of only ordaining men. The Acts of the Apostles in the New Testament refers to women deacons, but they were not ordained, and their role is believed to have been different from that of men.

In 1971, according to “Worthy of the Gospel of Christ,” by Joseph M. White, Ervin Kuspa, of St. Adalbert’s Parish, South Bend, was the first married layman to prepare for diaconate ordination in the Diocese of Fort Wayne-South Bend by taking courses at SS. Cyril and Methodius Seminary, Orchard Lake, Michigan. Bishop Leo A. Pursley ordained him a deacon at St. Matthew Cathedral in May of that year. On June 29, 1973, Bishop Pursley ordained five more men to the permanent diaconate following training at the Apostolic Institute of South Bend. The diocese had a total of 16 permanent deacons assisting in parishes when the local training program was temporarily suspended in the mid-1970s.

In 1979, Bishop William E. McManus approved the recruiting and acceptance of 25 candidates to prepare for permanent deacon ordination. Fathers Robert Schulte and Daniel Durkin were appointed to conduct their training and were named director and assistant director, respectively. On June 11, 1983, 23 permanent deacons were ordained in the Cathedral of the Immaculate Conception and took on assignments of 10 to 12 hours per week in parishes throughout the diocese. However, no additional applicants were enrolled for the permanent diaconate until the diocese came under the episcopal leadership of Bishop D’Arcy.

In the Diocese of Fort Wayne-South Bend, a deacon must be between the ages of 35 and 65 at ordination, or younger than 65 when a formation program begins. (The bishop can accept men into the program who are older than 65 at his discretion.)

The process of becoming a deacon currently takes four years. Besides human and spiritual qualifications, it includes a year of aspirancy, three years of rigorous study and pastoral ministry, and scrutiny and discernment by the Church.

The wives of men ordained deacon have a significant role to play during their husband’s preparation for the permanent diaconate and afterward throughout his ministry. Their full consent in their husband’s vocation is essential.