A handful of diocesan high school students, their youth ministry leaders and other Catholics of the diocese congregated at St. Elizabeth Ann Seton Parish, Fort Wayne, on Wednesday, April 27, to pray a holy hour dedicated to the legal protection of the unborn.

During the holy hour, one teen led those gathered in reciting the rosary before the Blessed Sacrament.

At the end of the prayer time in the church, the teens and ministry leaders grouped in the parish hall for dinner, where they listened to two speakers, engaged in small group discussions and had the chance for a Q&A session with Bonita Pratt, who teaches a class on pro-life apologetics to high school-aged homeschool students.

Photos by Joshua Schipper
High schoolers in Fort Wayne led other concerned Catholics of the Diocese of Fort Wayne-South Bend in a holy hour of prayer dedicated to the legal protection of the unborn on April 27 at St. Elizabeth Ann Seton Parish in Fort Wayne. Later that evening, the teens and their youth leaders learned from leaders like John Pratt, Director of Youth Ministry, about the upcoming decision in the Dobbs vs. Jackson Women’s Health case, which could overturn previous Supreme Court rulings on abortion.

John Pratt, diocesan Director of Youth Ministry, opened the meeting by discussing the upcoming Dobbs v. Jackson Women’s Health case, which could reverse previous Supreme Court decisions that legalized abortion across the United States. The nation’s highest court is expected to hand down its decision in June.

Pratt told those gathered that, since the 1973 Roe v. Wade decision, “about 62 million children have lost their lives to abortion in the U.S. alone.”

He also played the audio of a brief given by Mississippi State Solicitor General Scott G. Stewart in which the official details the reasons why the Supreme Court should uphold the Mississippi law banning abortion after 15 weeks’ gestation. 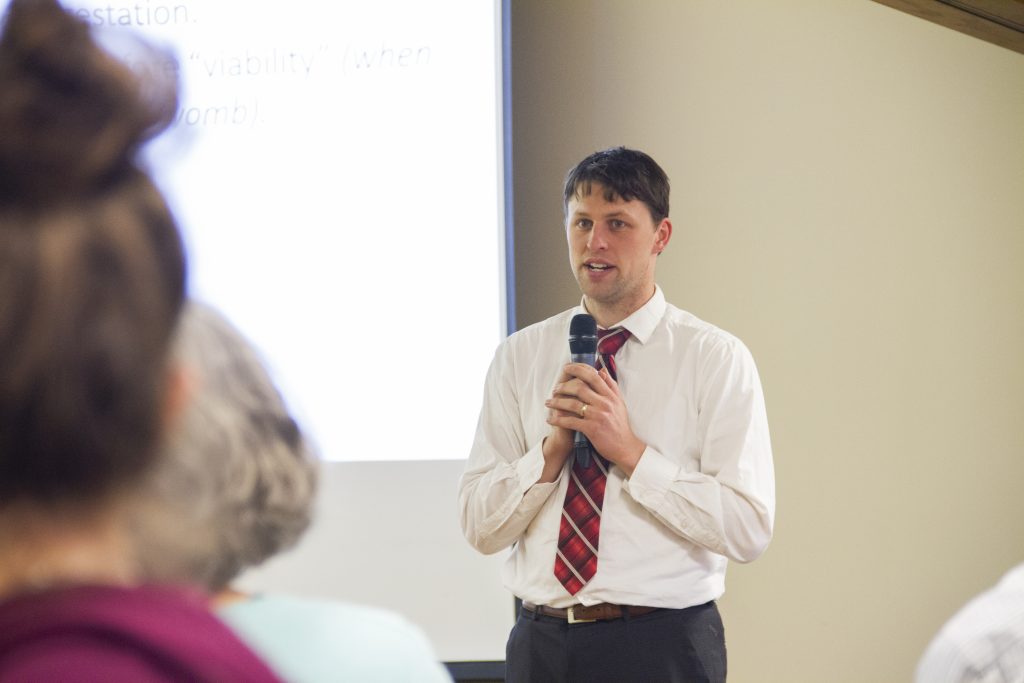 After John spoke, Bonita talked to the teens and their leaders about approaching the issue of abortion with their peers in a college setting. Bonita is an experienced teacher of pro-life apologetics, especially in the context of university life.

“Everyone is called to be pro-life in thought, word and deed,” she said. “It’s an issue for everyone because everyone is affected by the reality of abortion.”

She continued to speak about how abortion connects to universal objective truth, and why this means that “personal choice” does not justify the decision to have an abortion.

Attending events and supporting pro-life organizations at college campuses, Bonita said, is an important way to embrace the pro-life position and to learn additional ways to counter the arguments made by those in favor of abortion.

Bonita continued by informing the students that, regardless of whether or not they go to a Catholic college, they will encounter students and new friends “with a whole scroll of beliefs, especially freshman year.”

“You have to be ready to calmly and gently and graciously share why you’re pro-life with them,” she explained, “and help them along their path and journey to becoming pro-life.”

The students and their youth leaders then engaged in small group discussions before the Q&A session with Bonita, discussing which abortion questions were most difficult to combat, as well as what areas they felt most confident in defending.

One student asked Bonita how to approach questions regarding alternatives to abortion, and which options are good for the child. He had discussed this previously with a group of his friends at lunch.

“The general consensus [at the lunch table] is that foster care and adoption are terrible options, and that the system is broken; it’s more child abuse than if the child just didn’t exist, and that because I’m a traditional Catholic, I don’t believe in contraceptives, and therefore I don’t get to have a say in it.”

Bonita responded in part by explaining the difference between foster care and adoption. She explained that, when a mother learns about an unexpected pregnancy and knows she will not be able to care for her child, she can choose to go into the process of adoption, not through the foster care system. The main contrast between the two systems is that foster care is not a choice by the parent: The child is removed from a home and placed in foster care. Adoption, on the other hand, gives the mother a choice in whether or not to place her child for adoption, and to which parents the child will be given.

“So she gets to interview as many people as she wants, and pick exactly the qualifications that she wants the new adoptive parents to have,” Bonita said.

As the evening drew to a close, John thanked the teens for attending, and encouraged them to continue praying for the legal protection of the unborn.

A similar holy hour, dinner, presentation and discussion will take place on the northwest side of the diocese at St. Pius X Parish, Granger, on Tuesday, June 7, at 6:30 p.m. Those interested in attending can learn more information and RSVP at www.diocesefwsb.org/youth-ministry.