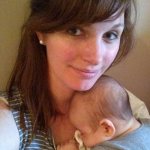 Spenser St. Louis, along with as many as 45 other seminarians from dioceses across the United States and Australia, will be ordained to the Sacred Order of Deacon in Rome on Sept. 27. “I am really excited,” St. Louis commented fervently. “After so many years of seminary, this is the last culminating step before priestly ordination. As a deacon I will get to serve the Church in a new way and come to know Christ in a deeper way by serving Him, especially through the sacraments that I will be participating in more intimately.”

Spenser St. Louis is pictured shortly after arriving at Pontifical North American College, Rome, in 2015 for seminary studies. He will be ordained to the diaconate on Sept. 27.

The faith has always been a central part of St. Louis’ life. His vocation was primarily instilled, he said, by his family; by “my parents encouraging my sister and I to attend daily Mass during the summers,” and to read the Bible from a young age.

He identifies his freshman year in high school as another pivotal point in his discernment process. At the Eucharistic Congress held in 2007, St. Louis attended a talk entitled “Surviving the Dating Game” by Father Daniel Scheidt. After speaking about how many of the teens present would be called to the vocation of marriage, Father Scheidt singled out one young woman and one young man, asking them if they had ever considered religious life or the priesthood; St. Louis was that young man.

The experience led St. Louis to begin the process of prayerful, intentional discernment, often echoing the favorite prayer of Bishop John M. D’Arcy, “Lord, what is your will for me?”

He understood the peace that he experienced throughout his discernment to mean that it was God’s will for him to enter seminary. As he concluded his collegiate studies, Bishop Kevin C. Rhoades invited him to complete the remainder of his priestly formation at the Pontifical North American College in Rome. St. Louis eagerly accepted.

“It has been exciting to be studying in the heart of the Church with the history of the Church surrounding me,” he reflected, about his time spent studying and serving in Rome thus far. 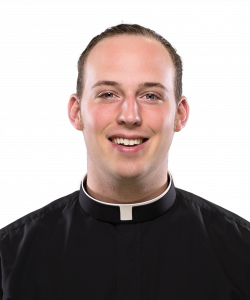 While first-year deacons are traditionally assigned to assist at parishes during the academic year, St. Louis’s current assignment is to minister to the students who are in Rome as part of the University of Notre Dame’s study-abroad program. He has enjoyed interacting with them and hopes that their shared experiences of God, country and Notre Dame will provide opportunities for ministry and connection.

“The hardest part for me is definitely being away from home,” St. Louis commented. “I have been blessed with so much support in my home diocese: my family, and the priests I look to as role models.”

When asked how the lay faithful of the diocese can best support seminarians, St. Louis decisively replied, “Remember us in prayer!”

He recalled an email from a previous rector to all the seminarians in which “he urged us to remember, in our lowest moments, in the most difficult struggles, the prayers of those at home; (and) call on them as a wellspring of support and grace.” St. Louis said he especially takes great comfort in knowing that each seminarian has been assigned a day of the month by the diocese on which the faithful are invited to pray in a particular way for one individual and his vocation to the priesthood. “It can be so encouraging to receive an email or a note from someone saying they remembered me in prayer,” St. Louis commented appreciatively.

Studying and serving alongside his class of 60 at the Pontifical North American College has afforded St. Louis the opportunity to see firsthand how God is working through priestly vocations in the United States. “God is truly alive in His Church,” he said.

At the heart of St. Louis’s discernment, study and ministry is a desire to one day return and serve the Diocese of Fort Wayne-South Bend, which has continually supported his vocation. St. Louis also hopes to encourage all young Catholic men to be open to the possibility of a priestly vocation, to learn to listen for God’s call and to boldly take action if they hear a similar call.